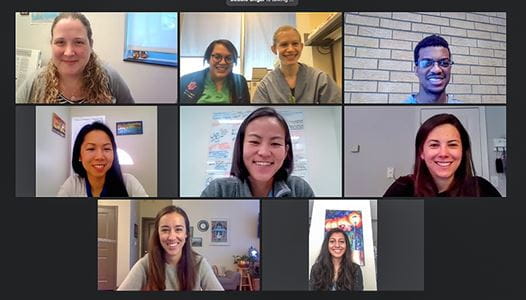 “Scholars Day is intended to give students, residents, fellows and faculty an opportunity to showcase some of the hard work they are doing on scholarly projects related to global health. Ideally, in a non-pandemic time, it would also be a community-building experience where we can network with other schools across IU. We are hoping to grow that aspect of it in the years to come,” said Jenny Baenziger, MD, associate director of education for the center and organizer of the event.

This year’s top global health research poster entries were available for review prior to the event and the top submission gave live presentations via Zoom. “This year’s entries showed the breadth of opportunities available to IU learners to improve the care of patients worldwide,” said Adrian Gardner, MD, MPH, director of the IU Center for Global Health. “From diabetes, to mental health to surgery, the research presented showed the complexities of global health and provided education about the care of local and global populations.”

Duffey participated in her project during her resident rotation at the AMPATH Kenya partnership in late 2019. The aim of the study was to culturally adapt the tablet-based NIH Toolkit cognition test for use in Swahili and Dhuluo, two languages spoken in Kenya. “If we can study and impact cognitive development in early ages, we can really make a big impact on someone’s life,” said Duffey. One example of an adaptation that was needed was changing animals that children were asked to identify from bears and tigers, which are not found in Kenya and therefore not widely-known to Kenyan children, to hippos and cheetahs instead. Duffey emphasized that the translation and adaptation was very time-intensive for her bilingual and trilingual Kenyan colleagues.

Soe spent two months in Kenya just prior to the pandemic in early 2020 and worked with a team at Moi Teaching and Referral Hospital to develop a child behavioral and mental health handbook for parents and caregivers in Kenya. Soe stated that in Kenya, one in four people are affected by mental illness in their lifetime and 75 percent have difficulty accessing care. “Stigma and lack of education pose some of the greatest barriers to mental health care in the country. Materials are often not available in the native language, nor are they sensitive to common cultural beliefs,” she explained. The initiative resulted in an 18-page primer for youth and families, being distributed across western Kenya in English and Swahili, that explains myths versus facts and common mental health issues seen in youth in Kenya.

Gillio completed her project as part of global surgery fellowship also in Kenya. “We chose to focus on differences between male and female surgical patients because highlighting these differences informs us about who can access care, when they do so, and how these patterns affect health outcomes,” explained Gillio. The research team conducted a retrospective chart review of 366 general surgery patients from 2018 including demographic information and clinical outcomes. “Women experienced significantly longer symptom duration than men prior to presenting at the hospital. Women were also more likely to receive a cancer diagnosis than their male counterparts,” Gillio said. The review also found that women with cancer were more likely to require a palliative procedure than their male counterparts, which suggests a later stage at diagnosis. Although it was a small study, Gillio said that the patterns exposed in the study show important gendered trends in healthcare seeking behavior in western Kenya.

Other poster presenters during the live portion of the event were Keno Carter-Guy, MD; Jennifer L. Grasch, MD; Christina Knight, MD; 4th year medical student Helen Li; and Feenalie Patel, MD. The posters and recording of all presentations are available on the IU Center for Global Health website.