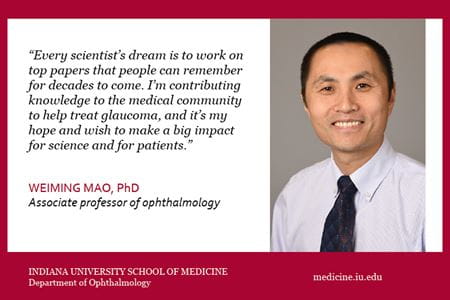 In vision science, challenging diseases that rob people of their vision require the best researchers to find causes and cures. The Indiana University School of Medicine Department of Ophthalmology is tackling those big challenges in research and treatment – and the team just got bigger and better.

This summer, the Department of Ophthalmology has added yet another talented vision researcher to its basic and translational research team to help fight against blinding diseases.

Weiming Mao, PhD, previously a researcher from the University of North Texas Health Science Center where he served as associate director of research at the North Texas Eye Research Institute, joined the Department of Ophthalmology on July 1, 2018.

The new associate professor of ophthalmology takes on the challenge of glaucoma, the second-leading cause of blindness in the United States. Mao leads several studies investigating the unique molecular mechanisms behind glaucoma, aiming to make significant contributions to the foundational knowledge used to development better treatments.

“There are so many research opportunities in basic and translational research at the IU School of Medicine Department of Ophthalmology,” Mao said. “And more opportunities to work closely with clinicians to help answer questions about glaucoma. We don’t quite know what initially causes people to lose their vision because of this disease, and that’s what I’m trying to find out.”

More than three million Americans live with glaucoma, a group of conditions in which increased pressure within the eye slowly diminishes vision. Like a balloon filled with water, the eyeball is filled with continuously replenished fluid that maintains the eye’s spherical shape and nourishes the tissue. But when the volume of fluid rises beyond normal levels, the “intraocular pressure” damages the cells of the vital optic nerve. The cause of pressure increases is uncertain, but the outcome is clear.

“That optic nerve functions as a bridge, translating signals from your eyes all the way to the brain,” Mao said. “Even if your eyes and brain are otherwise healthy, if this bridge is impaired, there’s no visual signals to the brain – and you go blind.”

within the eye or opening backup drainage paths, preventing optic nerve damage. Requiring continuous use, these treatments can be effective. But over time, drugs may lose efficacy and surgical interventions may be required.

With extensive funding from the National Institutes of Health (NIH), Mao is studying how two molecular pathways interact together to regulate intraocular pressure in primary open angle glaucoma. The researcher is examining these pathways in a particular structure within the eye, known as the trabecular meshwork, which allows fluid to exit the eye and release pressure.

“Trabecular meshwork functions like a filter or a safety valve. If it’s dysfunctional, one assumes the pressure will rise and glaucoma may develop. My studies look at how the disease relates to changes in the trabecular meshwork,” Mao said.

Drilling down to the molecular level of the meshwork, Mao is examining the TGFβ pathway and Wnt pathway involved in cell functionality and cell communication, respectively. His research reveals these pathways regulate one another to maintain the trabecular meshwork, a delicate process referred to as “cross-talk” in which one pathway balances the activation or inhibition of the other.

In glaucoma patients, that delicate balance appears to be disrupted. Excessive activation of the TGFβ pathway causes excessive inhibition of the Wnt pathway, resulting in a dysfunctional trabecular meshwork. Mao’s research continues to explore the mechanisms of the cross-talk between these pathways.

“While other researchers have examined these pathways independently, something different about my studies is that I’m looking at the two pathways together,” Mao said. “We’re trying to map everything to create the big picture behind how these pathways might cause glaucoma.”

The knowledge gained from Mao’s research could one day help inform new therapies that directly correct the balance between these important pathways in the trabecular meshwork, reducing intraocular pressure without long-term medication or surgery.

In addition to this main study, the associate professor is working on several other research projects. Mao is investigating the role of the Wnt pathway in steroid-induced glaucoma, a form that can arise in some patients when steroids are used to reduce inflammation within the eyes. And in yet another study, Mao is examining how the novel technique known as CRISPR Interference can be used to artificially regulate gene expression for TGFβ2 in the trabecular meshwork.

“Every scientist’s dream is to work on top papers that people can remember for decades to come,” Mao said. “I’m contributing knowledge to the medical community to help treat glaucoma – it’s my hope and wish to make a big impact for science and for patients.”

Elise supports external and internal communications for the Departments of Ophthalmology, Orthopaedic Surgery and Surgery.