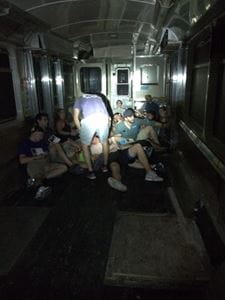 The subway car slowly fills with smoke, as strobes scatter the light, illuminating multiple casualties laying on the ground screaming in pain. Springing into action, emergency medicine residents move quickly to triage the wounded and render care. Complete chaos reigns as patients grab at feet of the responders. Suddenly the lights turn on: thankfully, it is just a training scenario. This is Disaster Day, a hands-on event that is integrated into the Indiana University School of Medicine Department of Emergency Medicine intern orientation training. Held at the Muscatatuck Urban Training Center, interns are exposed to the core concepts of mass casualty triage, disaster medicine and surge management. This unique training prepares interns for a key reality: Emergency Medicine residents will be the vanguard of any mass casualty event that occurs within Indianapolis.

The training incorporates lessons learned from a variety of prior disasters. In one scenario, responders are faced not with patients screaming, but rather the constant rings from multiple cell phones, all sounding in a dark empty void –a situation faced by responders of the Orlando Pulse Nightclub shootings. In another scenario, a simulated contaminated patient is tasked with touching as many first responders as possible, highlighting the complexity of hazardous materials exposures. Challenges such as the introduction of pediatric patients, the media and the worried well allow for residents to practice their leadership and communication skills in an unconventional environment.

Preparing for disasters is a key mission for the Emergency Medicine residency, as Indiana is no stranger to catastrophic events. In 1963, the Indiana State Fairground Coliseum was rocked by a gas explosion on Halloween, resulting in over 60 deaths and hundreds of injuries—many of whom were treated at Methodist Hospital. More recently, in 2011, Emergency Medicine physicians at both Methodist and Wishard Memorial Hospital (now Eskenazi Hospital) treated the casualties of the Indiana State Fair Stage Collapse, which killed seven and injured 58. With training like Disaster Day, Emergency Medicine residents are better prepared at responding to the unexpected with just a moment’s notice.

Tribute to Dr. Butch Humbert
2022 Graduates: Where Are They Now?
What’s Next for IU’s Simulation Fellowship Grads
What to Do When You Are Out of Bicarb
Are You Well?