After a nearly 30 year career, longtime medical director for INDYCAR and the Indianapolis Motor Speedway (IMS), Dr. Geoffrey Billows, is set to retire. Dr. Billows will hand over the title to Dr. Julia Vaizer at the beginning of November.

Dr. Billows became involved with motorsports during his residency at IU School of Medicine when he volunteered in the infield at IMS during racing events. “Immediately I was smitten with racing. I was a huge fan and have been ever since, and I’ll tell you, I never dreamed of the opportunities of working out there,” said Dr. Billows.

He quickly developed a passion for motorsports medicine and has been involved with the IndyCar Series serving different roles since 1995. “I guess I’m an adrenaline junkie,” said Dr. Billows.

He was named medical director of IMS in 2007. In his role, Dr. Billows was responsible for driver evaluation and treatment- as well as providing emergency care for spectators. He didn’t plan on retiring for a few more years but he began undergoing treatment for parotid salivary cancer in November of 2020.

“The realization hit me, I have no idea how much longer I will live. It could be a long time, or it may not be a long time, so I want to make sure I can enjoy how much time I have left,” said Dr. Billows.

While he will be slowing down to spend more time with his family and travel, you will still see him on the track serving a part-time medical service role and helping his replacement and mentee, Dr. Vaizer.

“I hate to give up racing stuff altogether, but I’ll be working for her. Our roles will reverse, and she will be my boss,” said Dr. Billows.

He says one of the most important roles in his career was being a mentor.

“I like working with the residents and medical students and I always hope I have made some impact on them,” said Dr. Billows. 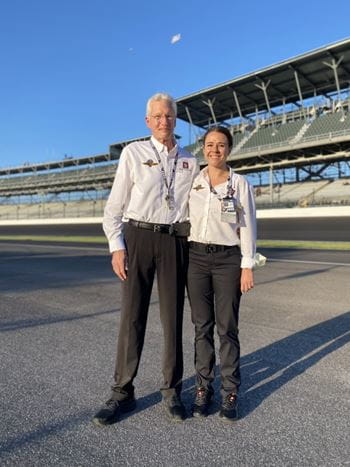 Dr. Billows thinks that Dr. Vaizer is the perfect person to transition into the role. Dr. Vaizer received her medical degree from the University of Central Florida before coming to IU School of Medicine. She has also served as the assistant medical director for INDYCAR and IMS since 2021.

“I don’t know where she gets it. She has more energy than anyone that I have ever known. She is an exceptional clinician, and she is really an excellent teacher,” said Dr. Billows.

Dr. Vaizer will not only be the first woman to serve in this role, but she is also the first person to graduate from IU School of Medicine’s motorsports medicine fellowship. A program Dr. Billows worked for years to establish.

“I have been blessed with an incredible team that has been set up by Dr. Billows and everyone who has been working with him over the decades,” said Dr. Vaizer.

Dr. Billows says he will enjoy watching Dr. Vaizer work toward her goals and aspirations in the field.

“She is passionate about motorsports medicine and she truly loves and cares for the drivers, crew members, and racing community,” said Dr. Billows.

Dr. Billows is confident Dr. Vaizer will be a great leader and continue to uphold the level of care provided by one of the best teams in motorsports medicine.

The Department of Emergency Medicine delivers patient care of unsurpassed quality and advanced emergency medicine through education, innovation and discovery in a collegial environment that promotes intellectual and professional growth.