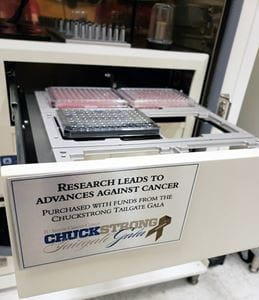 Even though Chuck Pagano is now an NFL coach in another city, the lasting effects from his resilient battle with leukemia—a fight that transcended sports to inspire Hoosiers throughout the state—are still making an impact in cancer research.

It all began shortly after Pagano, who was the head coach of the Indianapolis Colts from 2012 to 2017, publicly shared his leukemia diagnosis in 2012. The Colts immediately sprang into action and launched Chuckstrong. The initial sales of T-shirts and wristbands and other community efforts raised $486,000—all of which was designated for leukemia research and was used by the IU Simon Cancer Center to recruit a leukemia expert and to purchase laboratory equipment.

The expert, Utpal Davé, MD, was recruited from Vanderbilt University. He works to identify genes that drive aggressive leukemias and lymphomas in order to develop more effective individualized treatments for patients.

The laboratory equipment purchased is called a Fortessa. It allows cancer researchers to label cells in a patient blood sample with up to 16 different markers—much more than the capacity of similar machines. Labeling cells in this way allows scientists to classify them into different groups based on the markers the cells are expressing. This leads researchers to design experiments and work to determine the best treatment for an individual.

Learn how research supported by the Chuckstrong initiative is giving patients access to new treatment opportunities.

From 2013 to 2017, funds from the Chuckstrong galas helped recruit 32 new cancer researchers. Their combined grants from the National Cancer Institute has increased the cancer center’s NCI funding by 47 percent in the last five years. Funding from the NCI is considered the most competitive and prestigious in the country, serving as the gold standard by which to measure research success and progress.

The following are just a few of the recruits and their specialties:

Another recruit, Rachel Katzenellenbogen, MD, began in September 2018 as the inaugural Chuck and Tina Pagano Scholar. The Chuck and Tina Pagano Cancer Research Fund was established in April 2018 when Colts owner Jim Irsay opened his home for a dinner for top Chuckstrong sponsors and donors. The guests, Irsay and the Paganos contributed more than $800,000 to create the fund.

In addition to the Fortessa purchased in 2012, two analyzers have been purchased for different shared facilities. The Seahorse Analyzer helps researchers understand how cancer cells use energy differently than normal cells as they grow. The IncuCyte ZOOM is like a time-lapse camera with an attached microscope, permitting researchers to watch live images of cells as they grow. This enables researchers to better understand how certain drugs can block the formation of tumor blood vessels.

Whether it’s a new faculty or new equipment, the IU Simon Cancer Center has become stronger because of Pagano and the Chuckstrong initiative.

You can support cancer research and the Chuckstrong campaign by making a donation to the Chuck and Tina Pagano Cancer Research Fund.