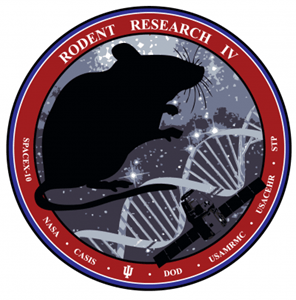 If you have been following our blog you know we are very busy working to get ready for our February 14th spaceflight launch!  Although it has been a lot of work, there have certainly been some fun activities too. One is that we were able to design our spaceflight mission patch and sticker. The final product of our patch is shown in the attached image. My brother, Doug Kacena, is an artist living in Colorado (where we were both raised). I asked him if he could help us design the patch. NASA gave us some specific requirements and although I am sure the requirements limited his creativity, I think the end result is great! For those interested in learning more about the process please read the article below written by Stephen Knapp, Freelance Writer, Evergreen, Colorado.

Although one of Colorado’s most respected abstract painters, it never occurred to Doug Kacena that his soaring talent might one day play a role in America’s space-faring history. And yet this February when SpaceX-10 thunders off the pad at Cape Canaveral and hurtles skyward toward a rendezvous with the International Space Station, it will be carrying Kacena originals and his handiwork will forever symbolize the mission’s lofty objectives.

To fully appreciate that happy convergence of art and science, it’s best to go back a few years to when Doug and his sister, Melissa, were pursuing studies at the University of Colorado at Boulder. Doug was pre-med with a minor in fine art. Melissa was working her way toward a PhD in aerospace engineering. The Kacenas’ academic flight paths briefly crossed when they found themselves toiling side-by-side on behalf of Bioserve Space Technologies, an outfit specializing in crafting the sophisticated tools that make zero-G research possible.

“Some of the stuff we did ended up on a half-dozen space shuttle flights, and Mir,” recalls Doug, owner of Artuvus Studios in Denver “It was really interesting, but my interest in art was stronger than my interest in molecular cellular developmental biology and I ended up going for the fine art degree.”

But Melissa stayed her original course, more or less, earning her aerospace doctorate from CU before taking the long way to a professor’s desk at Indiana University School of Medicine. Melissa came to Indianapolis by way of Harvard Medical School and the Yale University School of Medicine, and brought with her a world-class background in orthopaedics and rehabilitation. Since her arrival at Indiana University she proposed a space-based experiment by which to test new bone-healing therapies she’s helped develop.

“Most people don’t know that approximately 10 percent of broken bones never heal,” Melissa explains. “Bone healing is impaired in space, so if these therapies work in a weightless environment, it will be a good indication that they’ll work on Earth. It would be a very big step toward more effectively treating the IED (improvised explosive device) blast injuries that our soldiers are suffering in the Middle East.”

Melissa’s colleagues at the US Army Medical Research and Materiel Command (USAMRMC) loved the idea, and they decided to work together to understand how bone healing occurs in spaceflight and how the different treatments work on SpaceX-10.

For what it’s worth, Melissa’s bone therapy trial will occasion a couple of “firsts” for the American space program.

“The maximum number of mice NASA can fly is 40, and this will be the first flight to use the maximum,” says Melissa. “It will also be the first to use male mice. Male mice haven’t been used by NASA because they’re more aggressive than females, so we had to find ways to make them, um, happier,” she smiles.

With the nuts and bolts of the venture in place, the only thing left to do was come up with a suitable patch. Each mission, it seems, is represented by a patch signifying its specific purpose and indicating the agencies and organizations instrumental in getting it off the ground. Melissa had seen her share of patches, and wondered if maybe SpaceX-10 could do better.

“Some of them look a little bit like clip-art,” she says. “Doug is a great artist, so I asked if he could design the patch.”

There were no objections, although there may have been a few around the table who wondered what business an abstract artist had trying to create a rigidly representative patch. As it happens, they needn’t have worried. Doug hadn’t exactly been sitting on his hands while Melissa worked her way to Indianapolis.

“I actually had a very formal education in art, and I have a long history in graphic design,” Doug laughs. “I’ve done hundreds of magazine ads and business logos, and the principles are the same in every kind of art.”

And it’s not like NASA just turned him loose with the great-big box of Crayons and his own fertile imagination. Measuring just a few inches across, the official SpaceX-10 patch has to conform to some pretty specific guidelines. For starters, it must graphically depict both of the experiments on board and the space station that is their destination. Next, it has to display the acronyms of the half-dozen organizations involved, plus the mission’s formal title, Rodent Research IV. And finally, because the patch will be stitched, rather than printed, it can utilize not more than seven colors and should have limited details.

Accepting those unyielding restrictions without hesitation, Doug applied long years of experience, a wide array of talents and an inexhaustible fountain of creativity to the task. The image he produced is an artful homage to the mission and those who animate it, and a powerful portrayal of SpaceX-10’s important scientific goals set upon the star-filled canvas of space. And if an original Kacena abstract can fetch thousands of dollars in a Denver art gallery, Doug is pleased to accept in payment for his patch a more uplifting currency.

“I was honored even to be asked, and I’m thrilled to do it,” he says. “It’s a once in a lifetime opportunity. It’s a chance to be a little part of history.”