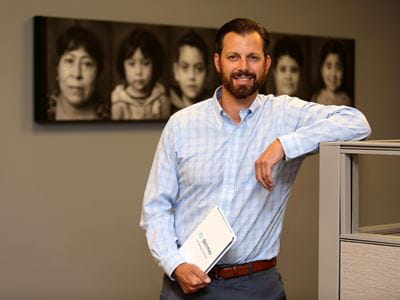 Or at least that’s what they were called in emergency rooms around Oregon’s Yamhill County. A decade ago, Rickards, a radiologist, was getting to know his patients too well. Often, he’d see the same patients over and over again, doing imaging studies that cost thousands of dollars but seemingly having little impact.

“What’s the value of this care or service that I’m delivering?” he thought.

The problems confronting his patients required medical care, but their underlying causes often fell outside a physician’s scope: behavioral issues, addiction or socioeconomic stress. After practicing for just six years, Rickards, a 2002 graduate of Indiana University School of Medicine, thought there had to be a better—and more efficient way—to deliver care.

“I couldn’t just keep my blinders on anymore,” said Rickards, who is also a native of Valparaiso, Indiana.

Today, Rickards is the senior medical director for population health at Moda Health, an insurance company operating in Oregon and Alaska. Moving into health administration wasn’t in his plans, though. Instead, it was the outgrowth of trying to streamline care and taking part in the creation of a community care organization, which in Oregon provides coordinated services to Medicaid beneficiaries.

It’s also a journey Rickards documented in Our Health Plan: Community Governed Healthcare that Works, which was published in August.

“Writing the book gave me the clear understanding of how medical care fit in the broader healthcare environment,” he said. “It helped me understand how important all the other broader aspects of health care are, and showed me the importance of involving them.”

As Rickards’ wondered about his value, Oregon, like many states, confronted a budget shortfall driven by Medicaid spending. While the federal government kicks in some funds, states are also on the hook for costs. They’re also tasked with administering the program for beneficiaries.

While the Affordable Care Act worked its way through Congress, the state faced a $1.9 billion gap. The budget gap was likely to grow with Oregon planning on enacting a federally-backed Medicaid expansion that would increase enrollment by 400,000 residents. Meanwhile, decreasing reimbursements to hospital systems or slashing services covered for beneficiaries weren’t feasible.

“We realized we needed to change the way we administered Medicaid benefits,” Rickards said.

At the time, the state had a messy, patchwork systems of managed care entities for medical care, behavioral health and oral care. There was no coordination. Providers were confused. And the providers competed instead of collaborating.

At its core, a CCO streamlines the process. They’re based on geography, serving a specific set of ZIP codes. They’re set up as non-profits and operate off a global budget, which pays a set dollar amount for every beneficiary covered. Then it falls to physicians, health departments and community groups to set up a network of providers. In turn, healthcare providers hold seats on a governing board and clinical advisory panels.

“We could take any profits it reaped and pump those back into the local community,” he said.

Setting up the Yamhill County CCO roped in Rickards. He served on its steering community. He earned a healthcare-focused MBA to understand logistics and operations, becoming the CCO’s health strategy officer. In that role, he helped implement programs, like a teledermatology program for 25,000 patients in a mostly rural county. All the while, he split time between his practice and work.

Over the past five years, though, management became the crux of his work. In December 2015, he was tapped as the chief medical officer, who oversees all 16 CCOs, for the Oregon Health Authority. And in July, he joined Moda, which provides administrative support for a CCO in eastern Oregon, covers state teachers and public employees and offers a plan on ACA exchange.

In quiet moments, though, he calls upon his old skills.

“Imaging is mostly technical,” he said. “I still do a little bit of work if there’s down time, which there isn’t very much.”

Share your most up to date contact information to stay on top of alumni happenings and to receive invitations to alumni events including reunions and free alumni socials. After completing the form, we’ll mail you an IU School of Medicine luggage tag.