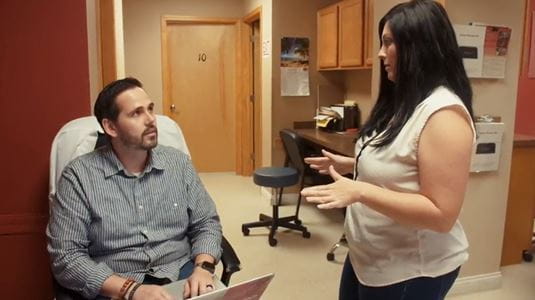 Will Cooke, MD, serves as the only physician in Austin, Indiana, the epicenter of one of the largest rural HIV outbreaks in the United States.

Alumnus Will Cooke’s unrelenting commitment to his patients, as well has his many successes, have earned him national recognition by the American Academy of Family Physicians as the AAFP’s 2019 Family Physician of the Year. The award honors one outstanding American family physician who provides compassionate, comprehensive care, and serves as a role model in his or her community and to other health professionals. Dr. Cooke is the first physician from Indiana to receive this recognition.

In October 2017, IU School of Medicine shared Dr. Cooke’s story of leading the small Indiana community of Austin through the opioid and HIV crisis.

President Donald Trump recently ordered the Department of Health and Human Services to declare the opioid epidemic a national public health emergency. But while officials in Washington debate how to best confront the crisis, one Indiana University School of Medicine alumnus has been on the front lines for years, drawing national attention as he serves a small Indiana town struggling with opioid abuse and its aftermath.

Will Cooke, MD, noticed the drug problems soon after he arrived in Austin, Indiana.

A 2001 graduate of IU School of Medicine, Cooke knew early on that he wanted to settle in a rural community—one that didn’t have access to quality healthcare and where he could really make a difference in patients’ lives. He found his calling in Austin, a town of just 4,200 people about 40 miles north of Louisville, Kentucky.

When he opened the doors of his family medicine practice in 2004, he became the sole medical provider in the community. Many residents hadn’t seen a doctor in years, and some of the health issues he encountered shocked him: fatal cases of cervical cancer that could have been prevented; tumors that had grown out of control; advanced diabetes; children who were not receiving their vaccinations.

He also saw up close the tell-tale signs of addiction. “Right away I knew there was a significant issue with opioids, benzodiazepines and drug use in general,” Cooke said. “A lot of the patients were coming requesting a combination of benzos and opiates and muscle relaxers, and saying they had been treated a number of years with these combinations.”

But that was only a precursor for the problems that lie ahead.

In 2012, a pharmaceutical company changed its formulation for Opana, a powerful opioid painkiller. Addicts had previously been taking the pills orally or by crushing and snorting them. But with the new version, the drug turned to gel when it was crushed. Instead, users started melting the drug, drawing it into a syringe, and injecting it intravenously.

“When that happened we saw a big spike in overdose deaths,” Cooke said. “We started seeing a lot of abscesses coming through the emergency department and the clinic. We saw an increase in endocarditis, an infection of the valves of the heart from injecting bacteria into the blood stream. Then we started seeing an increase in Hepatitis C. We saw all those numbers increasing, and we knew something significant was going on in the community.”

In December 2014, three patients tested positive for HIV at Scott Memorial Hospital. The numbers were an aberration for an area that typically saw less than a handful of HIV cases a year. By late February, the state had confirmed 26 cases. And as 2015 came to a close, the number had ballooned to 181 — the overwhelming majority of which were traced to injected opioid abuse. Austin, Indiana, was suddenly the epicenter of the largest HIV outbreak in recent U.S. history.

Cooke, who had come to town to focus on primary care, was unexpectedly forced to become an infectious disease specialist and an expert in opioid abuse.

“At the time there was a lot of talk about trying to get patients to HIV clinics,” Cooke said. “The closest one is down in Louisville, Kentucky. The next closest one is up in Indianapolis. There was no clinic here for the care to be provided at the time. We’d be looking at tents and buses, and to me that was unacceptable. It went against my entire concept of having this clinic here, which was to bring care to patients, not requiring patients to travel to receive care.”

So Cooke worked with state officials to open an HIV clinic in his office. He studied everything he could, built strategic partnerships with local and national organizations, and received advanced certification in the treatment of infectious diseases.

He estimates that he and his staff have treated more than 90 percent of patients with HIV cases in Scott County, sometimes traveling to them in a mobile unit to ensure they stay on their antiretroviral regimen.

The results have been astounding: The number of HIV cases has held steady at around 220 for several months. Significantly, somewhere between 75 and 80 percent of those patients are considered to be in viral suppression, meaning the individual’s viral load is virtually undetectable, and the likelihood of passing HIV on to someone else is greatly reduced. In essence, the outbreak has been contained.

Cooke has also been an innovator in addressing other consequences of the opioid epidemic, starting a clinic that allows patients in Austin to receive treatment for Hepatitis C in their own community. He is receiving training as part of Project ECHO, a program that links primary care providers with highly skilled specialists across the country through videoconferencing and other technologies. His success is prompting the state to establish similar clinics across the Indiana.

Cooke credits his time at IU School of Medicine with providing him the foundation he needs to respond to nearly any clinical situation he encounters, including the HIV epidemic. He cited the diverse experiences IU medical students are exposed to on a campus that includes a VA hospital, a safety net hospital, a children’s hospital, and tertiary care hospital.

“You have this unique place where you can see patients from a long spectrum from birth to grave, from poverty to wealth,” he said. “Having that broad range of experiences, that diversity from medical school, has really served me well here because wherever my practice takes me, I feel like I have at least some amount of background and foundation that I can build off of.”

Cooke is the first to acknowledge that the opioid crisis is far from over in Austin, but he’s hopeful that the community is on the road to recovery. Beyond his role caring for patients, he is actively involved in the community and is a passionate advocate for housing for recovering drug addicts, mental health services, workforce development and other resources that he sees as vital to making inroads.

It is only with this type of comprehensive action and coordinated response at the community level will our country win this battle, he said. Though his time in Austin has taken him down a road he had never envisioned, he has every intention of continuing the journey.