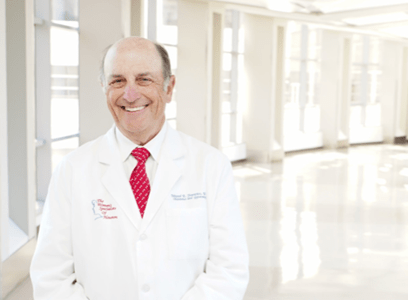 Dr. Ed Yosowitz was the last student seated in his medical school class and built a successful OB/GYN practice. In recent years he’s added children’s author to his resume, penning a trilogy of books to impart life lessons.

Growing up, Ed Yosowitz never envisioned being an author.

Instead, Yosowitz’s father foresaw his son running his dress shop—even if colorblindness meant his boy couldn’t tell ladies ensembles apart. Yosowitz, however, wanted to be a doctor. And the only member of the family who could spin a yarn was his mother, who settled her children each night with new plot twists to stories she conjured on the fly.

“I couldn’t wait for her to come home and tell me the next chapter,” Yosowitz said. “She planted the seed, but I didn’t know if I had the ability.”

Today, Yosowitz, who graduated from Indiana University School of Medicine in 1967, oversees a thriving obstetrics and gynecology practice in Houston, which isn’t bad for someone who was literally the last man admitted to his medical school class.

Twelve years ago, though, coping with his mother’s death led him to pen a children’s book. The rest of the production process, meanwhile, just fell into place. Mickey Maurer, who owns IBJ Corp, is Yosowitz’s cousin and was willing to print the book. The illustrator? He just happened to be a renowned watercolorist—and the father to one of Yosowitz’s patients.

And  so a trio of children’s books—Punky’s Adventures—was born. “I would never have predicted it,” Yosowitz said. “And I think my mother would have enjoyed these stories.”

The main character, Punky, is a pumpkin from a patch in southern Indiana. Soon after harvest, he realizes his fate is to be the main ingredient in a pie. So he flees, finding refuge at an orphanage, where children accept him, and he winds up becoming a jack-o’-lantern.

The lesson for readers is simple: You don’t have to be what other people want you to be—a theme drawn directly from Yosowitz’s life.

Accepted to the School of Medicine, he figured expenses put it beyond his reach. After visiting with the dean of admissions, they struck a deal: Yosowitz would be placed on a waitlist, and if a slot was still open when classes started that fall, he could enroll. Fatefully, Yosowitz got the call. He didn’t have an apartment in Indianapolis and had to toss his clothes into a cardboard suitcase.

At 17 years old, Yosowitz’s father sent him away after he refused to take over the family business. To pay for his undergraduate education at IU, Yosowitz worked odd jobs, including as a janitor at his fraternity house and another gig at Howard Johnson Inn.

Once he arrived in Indianapolis, the dean of admissions said to Yosowitz, “I want you to know that the last guy accepted to Indiana University School of Medicine has never failed out. “Don’t be the first.”

While the idea for Punky didn’t percolate for many years, Yosowitz quickly conceived of two more stories for the series, drawing inspiration from those around him.

In Priscilla’s Adventure, a tale about a redheaded pumpkin who sings her way to The Metropolitan Opera, Yosowitz used his red-headed, American-Idol loving granddaughter for inspiration.  Its lesson: If you have talent, people will find you. And for Pedro’s Adventure, Yosowitz dedicated the main character to his Hispanic patients and colleagues.

Typically, the writing and editing process took six months, and, accounting for illustrations, about nine months total. Making a buck wasn’t his goal, either. Instead, Yosowitz has dedicated the proceeds from the nearly 4,000 copies sold at $10 apiece to the Ronald McDonald House in Houston.

His work schedule has helped, too. Yosowitz, who is 75, stopped delivering babies 15 years ago and gave up surgical duties in 2012. Currently, he has clinic three days a week, leaving him four days a week to invent, write songs and think of new characters for his next book. It also lets him travel to Houston-area schools for reading days, spreading the tale of Punky and his lessons to 300 happy children.

“Anytime you create something, you just want people to like it,” Yosowitz said. “When I look at those kids and see them enjoying it, that’s fulfilling.”