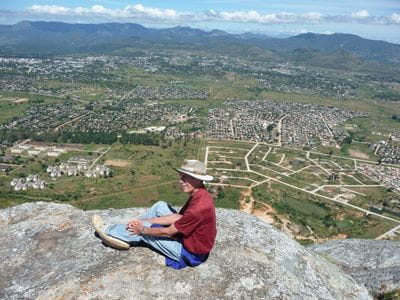 After growing up in Africa, Dr. Ed Dodge returned in recent years to teach and improve public health

At first, the request sounds strange, and Dr. Ed Dodge admits as much.

It’s not often a Zimbabwean minister working in rural Kansas calls you out of the blue. And even rarer he asks to visit your home in Florida. On the other end of the line, though, Dodge listened intently as the minister tried to explain. You see, growing up he’d admired Dodge’s father, Ralph, a Methodist bishop with the guts to stand up to the racist policies of Zimbabwe’s premier almost five decades ago.

Not everyone is steeped in African politics, but to Dodge the request made total sense. So 15 years ago, the physician opened his doors and, along the way, revived a connection that lured him back to a continent he hadn’t set foot upon in 40 years.

“He told me about this mission group he led,” said Dodge, a 1962 graduate of Indiana University School of Medicine. “It just sounded extraordinary.”

Over the next decade, Dodge rekindled a dormant relationship with a land that he once considered his home. The occasional mission trip morphed into a teaching position for public health at Africa University—and it has been a bookend for a man whose family was on the ground long before western nonprofits arrived.

Between 2010 and 2015, Dodge taught a semester-long public health course at Africa University—reprising a role he held in the late 1960s. Standing in front of a dozen students, the challenges he addressed in his lectures had morphed. Communicable diseases like typhoid, small pox and malaria—by and large—had been checked.

What struck Dodge was Zimbabwe’s public health issues mirrored those he found at home. “We’re seeing the same problems with diseases we see in the United States: diabetes, high blood pressure, heart disease and stroke. That’s what’s killing a lot of Africans today.”

Few know better than Dodge how Africa has grown up over the past century.

To understand, you have to go back to March 1936. Ralph and Eunice Dodge stepped off a steamer in the port city of Luanda in what we today call Angola. They came with missionary zeal, and three-month old Ed in tow. For 10 of the next 14 years, the Dodge’s trained and oversaw pastors doing field work only returning to the U.S. when World War II broke out.

But as soon as the guns stopped booming in 1945, the Dodges packed up their children and crossed the Atlantic Ocean once more. “In a way,” Dodge said, “it was like going home for me.” They spent the next three years living in a Methodist compound, but there were times when Ralph and Eunice evangelizing led them to take their children into the wild.

In 1948, the couple was dispatched to Zimbabwe for a central Methodist conference. The only transportation: bumping across 1,800 miles of primitive road in the forerunner of a Chevy Suburban. For Dodge, who was 12, it remains an essential memory. Sitting in the backseat, he and his sister wrote essays about the landmarks they visited, spied wild game out their window and met scores of locals.

He became even more rooted when his parents were sent north to the region near the Congolese border. “There were a few coffee plantations,” Dodge remembered. “Otherwise, it was Africa as it was a hundred years before.”

When Dodge returned stateside to attend Taylor University in Upland, Ind., a small evangelical school that was often the first choice for missionary children, he was a man apart from his native country. “I understood other teenagers,” he said. “We both spoke perfect English. But we didn’t understand each other culturally.”

Medicine was a means to get back to Africa, and central to Dodge’s plan when he entered IU School of Medicine. After earning his medical degree and spending two years in the U.S. Public Health Service, Dodge earned a master’s in public health from Johns Hopkins University. Then he packed up his wife, Nancy, whom he met at Taylor, and three children.

They arrived in 1967, but would stay just two years. Dodge loved his appointment and work on the faculty at Public Health College—a part of Haile Selassie University. Nancy, though, struggled. The privation and poor sanitary conditions she saw compounded her home sickness. “She was patient,” Dodge said. “But after two years she told me she could not spend another day in Africa.”

Back in the United States, they eventually settled in Inverness, Florida, an hour’s drive north of Tampa. Dodge spent the bulk of his career practicing family medicine. He retired early in 1996, stepping away from medicine to care for Nancy, who had been diagnosed with ovarian cancer that had now spread to her brain. She succumbed in early 1999, but Dodge cherishes the time he had with her.

“That was probably the best decision I ever made,” he said.

Four years later, the minister called. On a mission trip in 2009, Dodge happened to meet the dean of the public health faculty at Africa University, who asked if Dodge might be willing to help teach. He agreed, and his background in family medicine made him well-suited for the task. Today, a major public health challenge in Africa is one it shares with America: How do you get people to make healthy lifestyle choices?

“Traditionally, the African diets are very healthy,” he said. “They’re plant-based diets with no processed foods. Now, fast food has come and brought a tidal wave of diseases with them.”

With the arrival of spring, Dodge took up a semester-long appointment, lecturing to a dozen or so students who set off to become change agents for public health. “I had a major impact on the lives of the students I taught,” he said. “They had a ripple effect.”

And this coming June, his family will see up close the difference he’s been able to make. The Dodges, though, all have ties that bind them to the continent. Ed’s eldest son worked in Ethiopia for a Project Mercy. Meanwhile, his daughter and her husband will also be tagging along. Their adopted children, both of whom were born in Ethiopia, will be in tow and see their homeland for the first time in ages.

“It’s going to be emotional,” Dodge said. “But it will be fantastic for us all to share those moments.”

When Ed Dodge was born in Salamanca, New York, nobody could have guessed the twists and turns his life would take. He spent much of his childhood in Angola, where his parents were missionaries. He suffered culture shock when he returned to America as a teenager, but went on to become a physician who worked in the United States and Africa at various stages of his career. Along the way he was a prison doctor, an emergency room physician, a public health director, a family doctor, a volunteer with Volunteer-in-Mission teams in Africa, and an adjunct professor of health.

For information or to order copies of his memoir, please visit Ed’s author page on Amazon.