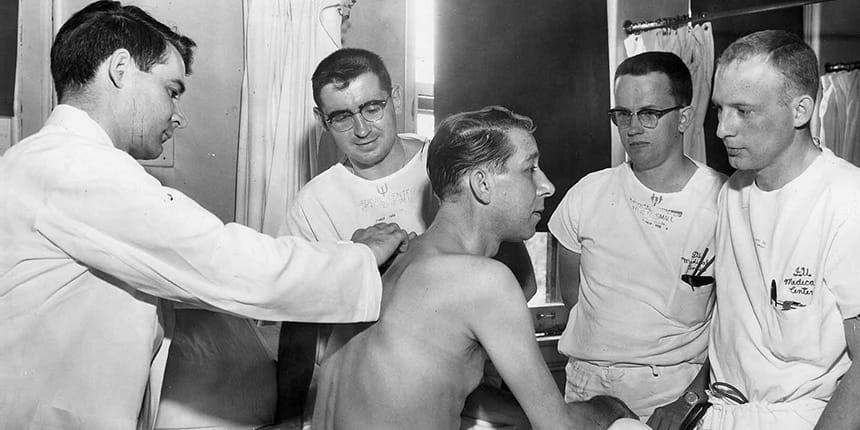 When the Indiana University Board of Trustees approved the creation of a new medical department in 1903, it marked the beginning of what is now the IU School of Medicine. Five years later, the state’s medical and political establishments – divided by competing loyalties to IU and Purdue University – reached an agreement that consolidated the two universities’ programs into one IU School of Medicine with a four-year program in Indianapolis and the first two years of medical school offered in Bloomington.

What would become known as the Indiana University Medical Center began to take shape on the west side of the city with the 1914 completion of the first teaching hospital, named after the Indianapolis physician, Robert W. Long, whose gift made it possible. Students and faculty left an older downtown building for the new Emerson Hall in 1919. The state’s first hospital devoted to obstetrics and gynecology, Coleman Hospital for Women, opened in 1927, and additional clinical, classroom and research facilities would be built and expanded in the coming decades.

The facility was built with more public support, however, than Riley Hospital for Children, which opened in 1924. Friends of Hoosier poet James Whitcomb Riley had created what today is the Riley Children’s Foundation and reached an agreement with IU School of Medicine to build a children’s hospital in his memory. More than 44,000 Indiana residents contributed to the ensuing fundraising campaign.

The late 1980s and 1990s brought significant change to the campus: new federal funding for centers for alcohol, Alzheimer’s, aging and cancer, and a Center of Excellence in Women’s Health. Also added were a new modern home for the Ruth Lilly Medical Library and creation of the Herman B Wells Center for Pediatric Research to conduct world-class research into childhood diseases.

In 1997, Clarian Health integrated operations of Riley and Indiana University hospitals along with Methodist Hospital, formerly one of the nation’s largest private hospitals. Clarian was renamed IU Health in 2011.

In 2000, the Lilly Endowment gave Indiana University $105 million to create the Indiana Genomics Initiative, which helped dramatically expand the human and technical infrastructure needed to conduct biomedical research driven by the newly deciphered human genome. A supplementary $50 million followed in 2003, then $60 million to recruit physician scientists, expand the Indiana Biobank and support translational research. In 2012, IU School of Medicine and IU Health collaborated on a $150 million strategic research initiative in cancer, neurosciences and cardiovascular disease.

At the same time there was an explosion of activity transforming and expanding the campus — tripling of external research awards, expansion of the medical student classes by 30 percent, and the addition of five new research buildings, including a neuroscience center unlike any other, bringing together clinicians and scientists from many departments to collaborate in ways not possible before.

For years, IU School of Medicine was the only school educating physicians in the state. Amid growing political pressure to establish at least one additional school of medicine in Indiana, university and state leaders in 1971 established a system that would grow to eventually include eight regional medical school campuses at host schools in Bloomington, Evansville, Fort Wayne, West Lafayette, Muncie, Gary, South Bend and Terre Haute.

These campuses initially offered the first two years of medical education, after which students would gather in Indianapolis for their final two years of clinical training. With the decision to expand the medical student body to meet the projected needs for physicians in the coming years, all the campuses now offer third and fourth-year clinical work.

The historical development of the nine-campus system, along with the expansion of enrollment, has resulted in IU School of Medicine becoming the largest accredited school of medicine in the nation, with the goal of ensuring that all students have an identical academic experience across all regional campuses.

2008: Pediatrician D. Wade Clapp and colleagues report the first effective treatment for the nerve tumors that affect patients with neurofibromatosis type 1, the most common neurological disorder caused by a single gene mutation.

2003: A compound discovered by Roger Roeske of the Department of Biochemistry and Molecular Biology, Plenaxis, is approved by the U.S. Food and Drug Administration for treatment of prostate cancer.

1983: Michael Conneally of the Department of Medical and Molecular Genetics and collaborators at the Harvard Business School use DNA technologies to locate the genetic marker for Huntington Disease).

1963: Cardiologist Harvey Feigenbaum pioneers the development of the echocardiograph, a device that detects heart disease with sound waves.

1954: Harris B. Shumacker, chairman of the Department of Surgery, performs the first open-heart surgery in Indianapolis using a heart-lung bypass machine.

1936: Rolla N. Harger, chairman of the department of biochemistry and pharmacology, patents the Drunkometer, the first practical breath test to measure whether people were drunk. His collaborator, Indiana State Police Capt. Robert F. Borkenstein, would go on to invent the Breathalyzer and become chair of what is now the Department of Criminal Justice at IU.

1909: Willis D. Gatch, future dean of the IU School of Medicine, invents the Gatch adjustable hospital bed; with the aid of a crank the patient’s head and feet could be raised or lowered.