Bigelow Open : The Race to $1 Million

The Bigelow Open was established in honor of Mike Bigelow, a local business executive who died in 2009 of pancreatic cancer. His family and friends began this annual golf outing to support pancreatic cancer research at Indiana University School of Medicine.

Since the event began the goal has always been to raise $1 million dollars in support of pancreatic cancer research to honor Mike, his family, and to help others with early detection of pancreatic cancer. Over the last 12 years, the Bigelow Open has raised more than $925,000 in charitable donations. With the community’s continued support, they intend to reach that $1 million target by July 2022. And they have no intention of stopping there.

All proceeds for the Bigelow Open benefit the Pancreatic Cyst and Cancer Early Detection Center, which is dedicated to promoting early detection of pancreatic cancer and preventing it through registries, community outreach, education and research discovery.

Register for the Bigelow Open

Join us for the 13th Annual Memorial Golf Outing at Sarah Shank on Saturday, July 16, 2022. 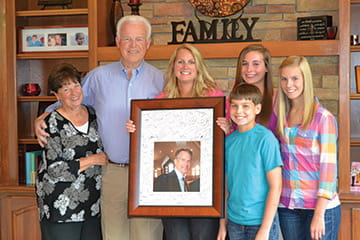 Mike Bigelow figured he tweaked a muscle during a pick-up basketball game. The pain in his midsection had to be that, right? It wasn’t until the assistant general counsel at drug maker Eli Lilly had a physical in February 2008 that he learned something may be amiss: His liver enzyme levels were high.

What came next was a two-month search for a diagnosis. There was a CT scan, an MRI and other tests. Clarity didn’t arrive until early April, when a surgeon at the IU Simon Comprehensive Cancer Center emerged early from a procedure to remove part of Bigelow’s pancreas: A mass found earlier turned out to be cancer. It had also spread to Bigelow’s liver.

Over the next 13 months, Bigelow endured chemotherapy, which beat back the disease for a time. Yet in March 2009, Bigelow died after the family returned home early from its annual spring break trip to Florida. He was only 41, an age when only three in 100,000 men his age are diagnosed with the disease.

Bigelow’s family and friends banded together to ensure other families don’t endure the same plight. Since 2009, they’ve hosted the Bigelow Open golf tournament each July, an event that so far has raised more than $925,000 to support pancreatic cancer research at IU School of Medicine.

Their generosity is essential to bolstering an area of research with limited funding. Funding from the National Institutes of Health simply isn’t enough to support the many promising research ideas that should be explored. And when the NIH earmarks money for research, pancreatic cancer tends to receive only a fraction of the support. Since 2011, the disease has received only 20 percent of the amount allocated for breast cancer research.

Money raised from the Bigelow Open has been pivotal in sustaining the work of C. Max Schmidt, MD, PhD, a surgeon and researcher at IU School of Medicine who studies pancreatic cysts, which can be precursors to cancer.

“If you can promote the early detection side of it, that would go a long way,” said Mike Bigelow’s wife, Kris. “Too often when they diagnose you, it’s too late.”

Pancreatic cancer is a silent killer. Its symptoms often don’t appear until the disease is advanced and treatment options are limited. The result is that pancreatic cancer is the fourth leading cause of cancer related deaths in the United States, claiming more victims each year than breast cancer. There is a window of opportunity to stop pancreatic cancer early—in patients with pancreatic cysts, which are often precursors to cancer.

Opportunities lie in finding ways to determine which patients are at greater risk for developing pancreatic cancer and detecting cancer at its earliest stages, when it’s still treatable.

The dilemma patients and physicians are left with is deciding how to proceed when pancreatic cysts are discovered through the course of other medical screenings. The pancreas is embedded deep within the abdomen and the lengthy operation to remove cysts is complicated—and risky. Leaving pancreas cysts alone bears its own risks, as some will eventually develop into cancer, and put a patient in peril.

IU School of Medicine is working to find better options, conducting research to identify the signals that could clearly indicate when a cyst is likely to become cancerous. We’re refining ways to closely monitor patients. And we’re developing targeted treatments to remove threats before they become cancer, or in cancer’s earliest stages.