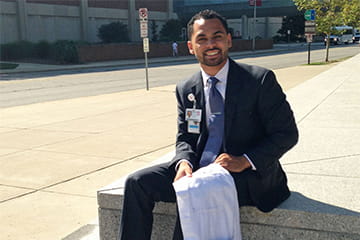 Growing up, Nathan Delafield (MD lass of 2016) loved visiting a doctor because it was a haven of stability. Delafield and his mom bounced around Phoenix until he was eight years old, and he spent time in foster care. He often saw drug and domestic abuse as he moved between shelters and low-income housing.

Seeing a physician, though, meant time with someone who was curious and compassionate, and it inspired Delafield’s decision to specialize in internal medicine. One summer during medical school, he returned home to work with the mobile unit from Phoenix Children’s Hospital, which takes doctors and treatment into communities for children facing the same struggles Delafield once did. “Often, the 15 minutes you get to spend with a patient is the only time that they feel safe,” he said.

An aunt and uncle ultimately took Delafield in and raised him. He went on to thrive at Arizona State, where a mentor at the Mayo Clinic, Dr. Marion Kelley, encouraged him to apply to Indiana University School of Medicine. Once admitted, Delafield received scholarships to make his training affordable and allow him to follow his passion: Practicing in under-served communities.