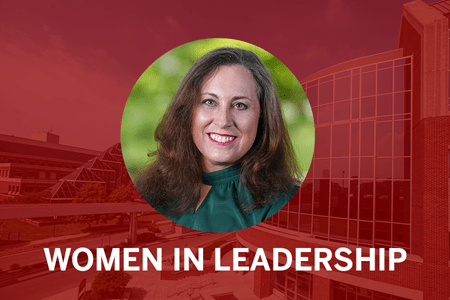 When Katherine Hiller, MD, MPH, relocated her family from Arizona to lead the Indiana University School of Medicine-Bloomington campus in July 2020, it was the height of COVID-19 lockdowns and uncertainty. Add to that the challenges of stepping into a leadership role at a regional campus with several retiring senior faculty members. Plus, the medical school program was soon to relocate to the Health Sciences Building at Bloomington’s brand new Regional Academic Health Center.

Among the personal challenges, there were no activities open for Hiller’s children—ages 9 and 13 at the time—and when school started, it was online. Back on campus, the medical education program also shifted to a 100-percent virtual format, and clinical experiences for medical students were paused. 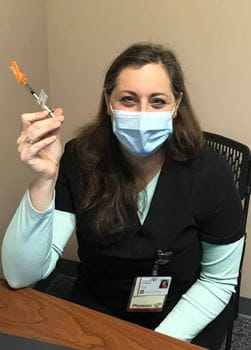 But she’s never been one to shy away from a challenge.

“Kathy has the skillset to sail on rough waters,” said her longtime mentor Harvey Meislin, MD, professor of emergency medicine at the University of Arizona College of Medicine-Tucson and a 1972 IU School of Medicine graduate. “She’s somebody who is driven and motivated, somebody you don’t have to micromanage and who communicates well.”

Julianna Jung, MD, a colleague and collaborator from Johns Hopkins University School of Medicine, calls Hiller an innovative leader and problem solver who listens to others and perseveres through hardships.

“In short, she is a leader who gets things done, and one who people will follow gladly,” Jung said.

The right leader at the right time for Bloomington

Within the IU School of Medicine regional campus system, Bloomington is unique. It offers not only medical student education but also an undergraduate minor program, as well as two PhD programs. With the opening of the Regional Academic Health Center, the medical school is positioned right next to IU Health Bloomington Hospital, expanding collaborative opportunities to enhance medical education and grow residency programs.

Paul Wallach, MD, executive associate dean for educational affairs and institutional improvement, was confident Hiller was the right person to take on the challenges and lead the Bloomington campus at this pivotal time. 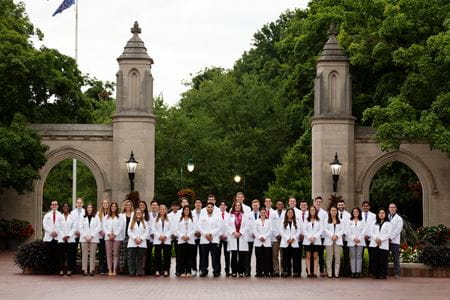 “I was looking for a very specific type of background in the person to fill that role, and Kathy Hiller couldn’t be more perfect,” Wallach said. “She is a very smart and capable leader.”

As the former director of undergraduate emergency medicine at the University of Arizona College of Medicine-Tucson, Hiller brings experience in medical education, faculty development, research and clinical care. She continues to practice emergency medicine.

“Being a practicing physician helps with credibility with our health system partners,” said Hiller, who is working with IU Health and Bloomington’s 400 adjunct faculty physicians to enhance clinical clerkship experiences for medical students.

“They genuinely want to work with me to develop the academic program,” Hiller noted. “I’m making sure we’re collaborative and transparent, and that we meaningfully engage with them.”

In addition to her medical degree, Hiller holds a Master of Public Health (MPH) from the University of Arizona; her thesis on the influenza vaccine gave her valuable insights during the COVID-19 vaccine rollout.

“I became a doctor because I wanted to help people, and I realized if you want to make the largest impact, you really need to work on population health,” Hiller said. “Under Kathy’s leadership, we held a consensus conference involving over 100 emergency medicine educators, the end product of which was the first national, specialty-specific, consensus-derived assessment tool to be described in the literature,” explained Jung. “Kathy led us in piloting the tool at 13 institutions across the country, thus demonstrating the feasibility of implementing a standardized assessment system across multiple diverse sites.”

It was Hiller’s vision and determination that carried the project to fruition, Jung said.

“She is innovative and open-minded, and I am certain she will keep her (Bloomington) campus on the cutting edge of medical education theory and practice, and that she will ensure that her students receive the highest quality training,” added Jung.

Hiller’s interest in emergency medicine grew out of her lifelong love of swimming. In high school, she worked as a lifeguard.

“There were a couple times when emergencies happened at the pool, and I felt insecure that I didn’t know exactly what to do,” she recalled.

The daughter of two science majors who valued academia, Hiller studied chemistry and biochemistry at the University of Arizona and worked in a toxicology lab. At the same time, she began training as an emergency medical technician (EMT) and took a job as a first responder in Tucson.

“I absolutely loved it,” Hiller recalled. “I almost didn’t go to medical school because I thought of becoming a paramedic.” 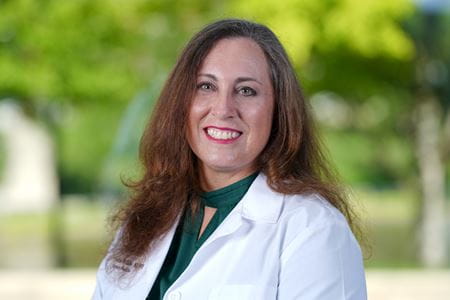 She applied and was accepted to The Ohio State University College of Medicine, but struggled early on, failing her first anatomy exam. In retrospect, that failure was fortuitous because it brought her under the tutelage of the late John McNauger Stang, MD, who was assistant dean for student counseling and tutoring, and, according to Hiller, “one of the best educators at OSU.”

After medical school, Hiller completed an internship at Kern Medical Center in Bakersfield, California, followed by her residency in emergency medicine at Denver Health Medical Center, before returning to Tucson to take a faculty position at the University of Arizona.

“I was only the second woman on faculty at the University of Arizona Department of Emergency Medicine, and I was the second woman to promote to full professor, as well,” Hiller said. “In the first few years, it felt like the wild west with this male-dominated group, but we hired a whole group of young faculty shortly thereafter, and many were women.”

Meislin, who hired Hiller for her first academic position, said, “I had a hunch Kathy was going to go places back in 2004—and I was right.”

Within a year of joining the Arizona faculty, Hiller completed a clinical scholars program for faculty interested in research. She also began mentoring many of the junior faculty members who joined the department in its early years of development.

“Mentoring women faculty became a big part of my time at the University of Arizona,” she said.

Contrary to the common advice to be careful about overcommitting, “I would tell them to say ‘yes’. You never know exactly where your career is going to go. It gives you opportunity to look at things, and can open worlds for you.” 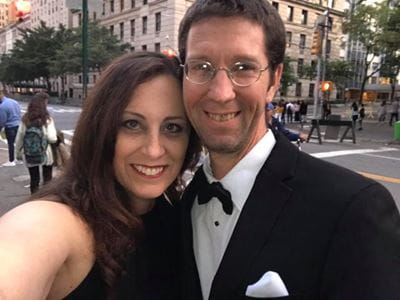 Like Hiller, many of her mentees were mothers of young children. She acknowledges the challenges of simultaneously growing a family and a career in academic medicine and says organization and support are key.

Hiller’s husband, Dave, is a stay-at-home dad who enjoys rock climbing at the gym several times a week. He not only supports Hiller’s career but also encouraged her to make time to finish the hours for her pilot’s license, which she earned in 2017. Their children are now settled into activities in Bloomington and have made some good friends.

“I live and die by my Outlook calendar, and I’m big on lists,” said Hiller, adding, “I’m surrounded by people who give me a lot of grace—my husband, faculty and staff—and I really try to pay that forward when someone else needs some extra time to take care of personal things.”

Charting a path toward big-picture goals 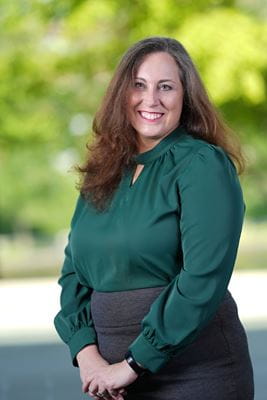 A mentor once advised Hiller the path to a successful medical career was to become a “triple threat,” combining excellence in teaching, patient care and clinical research—which she has done.

In her second year as the Bloomington campus director, Hiller faced many faculty retirements, so she’s devoted significant energy to recruiting.

“I love that there’s incredible opportunity to create here,” Hiller said. “Bloomington is a resource-rich environment, and I feel very supported and part of a team. It’s an incredible place to be.”