“Maybe You’ll Thank Me One Day” 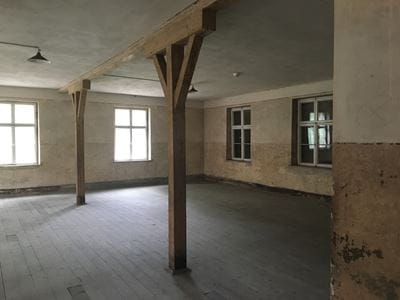 Joshua Rager is a fourth-year medical student studying medical ethics with the Fellowships at Auschwitz for the Study of Professional Ethics (FASPE) this summer. If you’d like to learn more about his path to medicine before reading about his experiences abroad, check out his first blog post.

The gynecology block at Auschwitz shares its eastern wall with an alley where prisoners were executed by firing squad. The windows on that side are boarded up to obscure any view of the executions, but nothing—in my mind—would have dulled the sound of gun fire. The sounds of the steps of those who were directed to clean it up.

The atrocities that occurred outside did not, however, stop at the door. This building, Block 10, was dedicated to experiments on primarily women (but also men) of the camp to develop efficient and effective sterilization techniques that the Nazi regime hoped to employ on masses of “unwanted” races and ethnicities. Dr. Clauberg—the head of this ward at Auschwitz—claimed his techniques could sterilize 1,000 people a day if Hitler only asked.  While Nazi physicians coordinated and directed the experiments, many times the executors of the operations and injections were prisoners themselves—imprisoned physicians and nurses who previously treated the communities they were now violating.

One story of a Jewish woman from this block was shared with me. She was a subject of the ward and had received injections to test new compounds for sterilization and was set to have her ovaries removed by a fellow prisoner. She was sedated. She was operated upon against her own will. After the woman came out of surgery, she laid into the Jewish surgeon. “How could you do this?…How can you follow the orders of these wicked men, especially against the livelihood of your people? There is no heaven, only hell for you!”

The Jewish doctor simply listened, looked solemn, and when she finished said something very peculiar and not clear to the woman at the time, “Maybe you’ll thank me one day.”

Later, while the woman was recovering from surgery, she heard the screams of a prisoner in the room next to hers. It was a man who was being beaten by guards. After the guards left, the woman snuck over to the next room to comfort the man. In that exchange and amongst the violence and cruelty, the man and woman made a pact that if they both survived the camp, they would marry.

In 1945, Auschwitz was liberated. The man and woman survived and in a nearby town in Poland, they found one another. The man was eager to keep his word to marry his rescuer. The woman stated to the man, “I wasn’t completely honest with you at the time of our agreement. I am not able to have children and if you would rather not marry me, I understand.” The man refused to hear this consolation and they married.

The couple adopted children and happily lived as mundane lives as possible in a tattered, post-war Europe. Then the woman fell ill.

She went to a doctor to be examined.

The doctor reported back to her and said “Congratulations. You’re pregnant.” The woman protested stating she was unable to conceive given her operation at the camp. The doctor said, “I see your scars but your body must be intact. You are indeed with child.” Further testing confirmed that her ovaries were never removed. “Maybe you’ll thank me one day” finally made sense.

I was standing on the second floor of Block 10 when our guide, Pawel, told our group of medical and seminary students this story—the boarded up windows in the background, my friend Cate’s cheeks divided by tears. My own skin tightened. I battled emotions of horror and joy; rage and tears. This very much symbolized the polarities that existed in Auschwitz—places of death and life, despair and hope. Defined by tragedy but still, rare and trace instances of beauty and miracle survived.

The Fellowships at Auschwitz for the Study of Professional Ethics (FASPE) challenged me and my peers to consider and confront the various sets of “morality” that existed at that time and now. John Steinbeck wrote “The sign of first rate intelligence is the ability to hold two opposing ideas in your head at once and still maintain the ability to function.” Adapting Steinbeck’s words, FASPE pushed my emotional intelligence and I often found myself holding at least two opposing emotions in my heart, at least two opposing sets of “morality” in my head, and I definitely wavered in my ability to function at times.

I don’t plan to ever use those words—“Maybe you’ll thank me one day.” They are too paternalistic and tragic for modern medicine. Yet I hope I can listen quietly and bear certain burdens with and (at times) for my patients. I hope that if everything around me falls apart and everything is stacked against me and a patient, I will choose the patient…I will choose kindness amongst tragedy.

MS4, ethicist, proud angler of 8 different trout and salmon species (currently on the hunt for number 9).