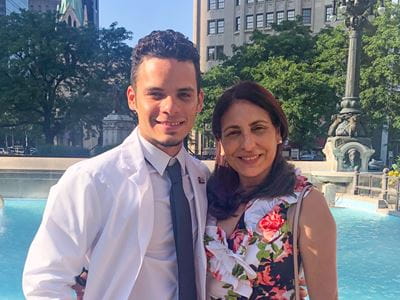 This is the third installment in a series of blog posts to celebrate Hispanic Heritage Month. Each year, National Hispanic Heritage Month is observed from September 15 to October 15, celebrating the histories, cultures and contributions of American citizens whose ancestors came from Spain, Mexico, the Caribbean and Central and South America. The dates are significant because many Latin American countries celebrate their independence days during this 30-day period.

When Christian Arce Guzman moved with his family from Cuba to the United States as a 14-year-old, it was both exciting and overwhelming.

“As an immigrant, coming from a completely different way of living, starting in a completely different educational system, making new friends and learning a new language, it took me time to adapt,” said Christian, a second-year medical student at Indiana University School of Medicine. “The challenges I went through migrating to the United States is one thing I’m most proud of. I’ve been able to accomplish most of my goals by overcoming challenges.” 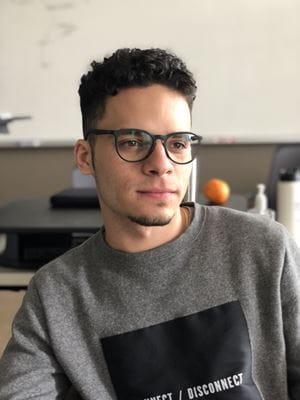 Back in Cuba, Christian dreamed of being a professional baseball player—like many American kids do. His mother, a dentist, often took him along with her to the office; Christian made it known he was not interested in that career. His father worked as an epidemiologist, a career that’s hard to understand as a child. Christian liked sports and writing, so if he couldn’t make it in baseball, he was considering a career as a sports journalist.

His life was thrown a curve ball when his family decided to immigrate from the small, rural town of Artemisa, Cuba, to Miami. It was in his new high school that Christian was first exposed to anatomy and other sciences that piqued his interest—so much so that he decided to major in biology and minor in chemistry at Florida International University, taking a pre-med pathway.

“The students in the scholarly concentration are interested in becoming more culturally aware,” he said. “Improving diversity within the medical school is part of the solution for addressing health care disparities within the Hispanic community.”

A topic of frequent conversation is the great diversity of language and culture within the Hispanic/Latino population, which includes those descended from more than 20 different nations. In Miami, Christian interacted with people from several Latin American countries including Argentina, Paraguay, Venezuela and Chile. 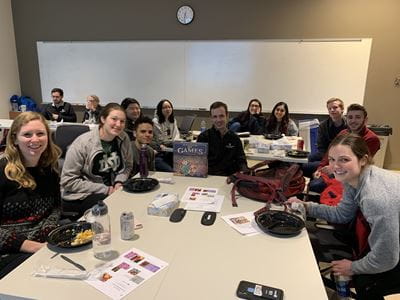 “There’s so much you can learn from people who come from different countries,” Christian said. “Wherever I go, I always embrace my culture and try to teach my friends more about the Hispanic culture. It’s really diverse.”

In Cuba, health care is free and accessible to all; however, medical technology is lacking, and doctors are not well paid, prompting many of them to leave the country.

“Cuba, for years, has been exporting doctors for economic or political reasons. That leaves a huge gap of medical care,” Christian said.

While the United States benefits from the latest technology and research findings, access to health care is not universal. For a variety of reasons—lack of insurance, low income, language and cultural barriers, or general mistrust—many Latinos don’t get the care they need.

While his career path in medicine remains wide open, Christian is leaning toward specializing in internal medicine with a subspecialty in cardiology.

“I would love to go back to Miami, where the majority of patients would be Hispanic,” he said. “Patients tend to trust doctors who are from the same ethnic or cultural background as them. When you can make a connection—over food, music, cultural things—they see someone who can relate to them, and they open up.” 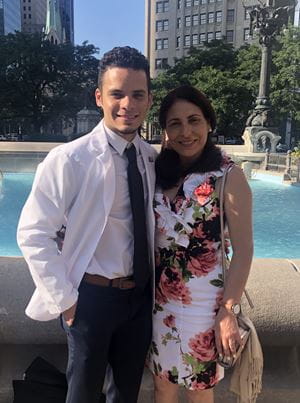 Both of Christian’s parents are extremely proud of his chosen career path. After being a dentist in Cuba for 20 years and having to start over with her training in the United States, his mother is now in dental residency.

“My mom is my role model,” Christian said. “It was a challenge for her working and raising my sister and me while studying for board exams. I always tell her I’m proud of her and try to live up to her example. She and my dad are so supportive.”

Christian sees his experience as an immigrant as a strength for his future medical career.

“Being an immigrant and coming from a Latin American country, what I’m most proud of is that I’ve learned,” Christian said. “My experiences give me a different perspective. Maybe there are things I can do as a physician to have an impact on a whole community.”

Read more about how the Care of Hispanic/Latino Patients Scholarly Concentration is equipping IU School of Medicine students to combat health care disparities, and find the previous installment in this Hispanic Heritage Month series here.