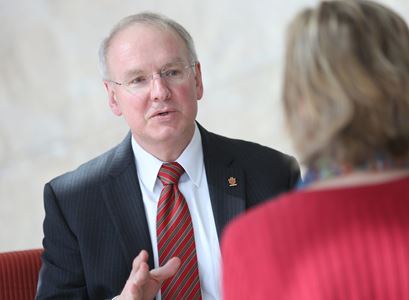 Indiana University School of Medicine Dean Jay L. Hess, MD, PhD, MHSA, updated the IU Board of Trustees about the state of the school on October 4, outlining significant progress made over the last several years and highlighting the school’s mission to make Indiana one of the nation’s healthiest states.

The following are five takeaways from his presentation:

Diversity among IU School of Medicine students is on the rise.

More than 22 percent of IU medical students are black, Hispanic or from other backgrounds historically underrepresented in medicine, up from about 13 percent during the 2013-14 academic year.

Research funding to the school continues to surge.

NIH funding for the federal fiscal year that ended September 30 is expected to total just shy of $150 million. That represents an increase of an astounding 54 percent in just five years. Overall research funding is also at an all-time high of nearly $339 million.

View Dean Hess’ full presentation to the IU Board of Trustees

Donors are making significant investments in the school’s research and education missions.

Since 2013, the school has raised over $1.1 billion as part of For All: The Indiana University Bicentennial Campaign, surpassing the school’s original campaign goal of $880 million. The total includes more than $435 million in philanthropic gifts–including 84 endowed chairs and professorships, 76 medical student scholarships and 46 other endowments established by faculty, all of which will have their impact multiplied as part of the campaign’s gift-matching program.

The school has recruited more than 200 faculty members in the past five years, including several center directors and department chairs. Hess noted that the school has placed a significant emphasis on increasing the number of women and underrepresented minorities in leadership positions.

The School of Medicine-led IU Precision Health Initiative is resulting in improved care for patients.

In partnership with IU Health, Indiana patients now have access to CAR T therapy—an immune-based therapy and one of the most promising advances in cancer care in a generation—and the cancer Precision Genomics Program has expanded to five locations throughout the state. IU School of Medicine is also expanding its research infrastructure as part of the IU Precision Health Initiative: Work is complete on a cell therapy GMP facility, a high throughput DNA sequencing facility, and data warehouse and analysis infrastructure. The school is also expanding its nuclear magnetic resonance spectroscopy capabilities with the purchase of 700 and 400 MHz equipment.

“As I told the IU Board of Trustees, these successes are the result of the 11,000 faculty, staff and learners who are part of IU School of Medicine and who contribute every day to our mission,” Hess said. “I am incredibly proud of what we have accomplished together, and I am confident that we will build on this momentum and continue to improve care for patients in meaningful and measurable ways.”