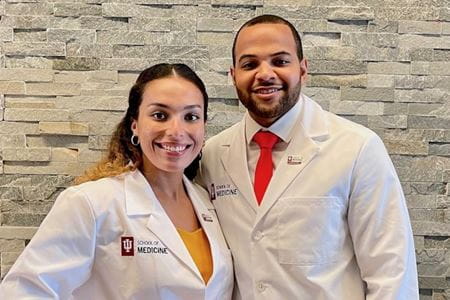 Medical school is tough. Academic pressures combined with sleep deprivation can take their toll on relationships. In honor of Valentine’s Day, Indiana University School of Medicine is highlighting couples who got married while in medical school. They say they’re lucky to have the support of a spouse who’s a built-in study buddy.

Austin and Kylee met their junior year of high school in Dalton, Georgia. Austin tutored his peers in math lab, and Kylee frequently showed up. It didn’t take Austin long to realize she didn’t need tutoring.

“I wanted to go to the tutoring lab to hang out with him,” Kylee admitted.

The two started dating senior year and quickly became inseparable. After graduation, they both started their college education at Dalton State before transferring to Georgia Institute of Technology, where Austin majored in mechanical engineering and Kylee majored in biology.

Kylee knew early on that she wanted to be a doctor, her interest sparked after shadowing a pediatrician her junior year of high school. It took Austin until his final year of college to decide he wanted to be a physician, too.

“I did a nine-month internship in Texas in engineering and hated it,” he said. “Then I did a lot of shadowing in medicine.” 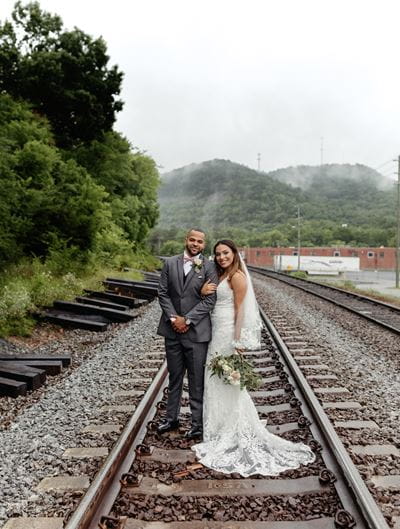 Kylee and Austin applied to eight medical schools and were nervous about whether they would both get into the same one—or any at all.

“We actually got accepted into five of the same schools,” Kylee said.

The relieved couple selected their top choice—IU School of Medicine.

“We liked the program and its reputation and felt it would prepare us for our careers and give us good opportunities,” Kylee said.

The summer before starting med school, they were married on June 19, 2021. They’re now in their first year at IU School of Medicine-West Lafayette.

“He is very disciplined,” Kylee said. “Whatever he sets as his goals for the day, he’s going to check them all off.”

As Austin and Kylee progress through medical school and begin their clerkships, they know their schedules may diverge, but they hope to do most of their rotations together. They’ll face another hurdle when they graduate from medical school in 2025 and participate in the Couples Match—hoping to get accepted to residency programs in the same location.

For now, they both enjoy having a partner at home who is on the same educational track. Austin can still “tutor” Kylee—or sometimes vice versa. When test time comes, there’s a mix of healthy competition and cheerleading.

“I always tell her, like I tell any of our classmates, I want them all to do really well and make a 99—but I want to make 100,” Austin said.

One of those IU School of Medicine-West Lafayette classmates is Ethan Biggs, who is married to second-year medical student Sydney Clark. While Kylee and Austin are able to go through the stages of medical school together, the journey hasn’t been as aligned for Ethan and Sydney.

They, too, met back in high school in Valparaiso, Indiana. For them, it was first period biology. Ethan and Sydney didn’t start dating seriously until their freshman year at Purdue University, where they both studied biomedical engineering.

“I don’t get electrical engineering, and he was initially interested in that, so I needed him for a physics tutor,” Sydney said. By the time they both graduated, they had determined they not only wanted to do life together, but also had similar career interests in medicine. They applied to the same medical schools, but neither was initially accepted to any. That’s when Ethan decided to pursue his PhD in biomedical engineering, and Sydney went for a master’s in public health.

Because her program was shorter, she reapplied to medical school a year earlier than Ethan. Now both are at IU School of Medicine, but Sydney is a step ahead.

“We planned on going through everything together, so I felt very much alone my first year,” Sydney said. But she did make close friends in her small class of 24.

For Ethan, following a year behind Sydney in medical school is great.

“It made my life easier because she’s been through the classes already, and she can point me to all the resources,” he said.

After Sydney finishes her second year, she plans to take a year-long pause in her medical education to get a master’s in biomedical engineering. Then she will be on track to start clinical rotations the same year as Ethan.

The couple was married in Hawaii on July 3, 2021, right before Ethan started medical school. Sydney was a student leader at Ethan’s first-year orientation last fall.

In retrospect, Sydney thinks it’s best they aren’t in classes together—her competitive spirit might have gotten carried away. Now she encourages Ethan, who will defend his PhD dissertation this summer, as he embarks on medical school.

“Hopefully, doing rotations at the same time will make life easier,” she said.

“You have so much in common—you have so much to share about your training, your education, your experiences with patients and your shared passion,” said Aaron, now a first-year psychiatry intern with IU School of Medicine. 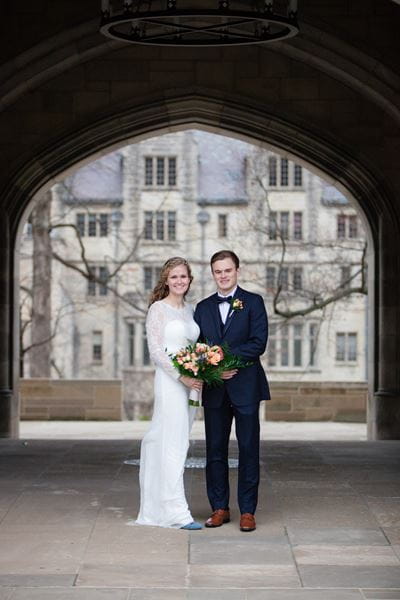 He and Maggie were married on Nov. 27, 2019, almost exactly two years from the day they met. Aaron actually met his future father-in-law first.

As a first-year medical student at IU School of Medicine-Terre Haute, Aaron became acquainted with Richard Holdeman, PhD, through association with the Reformed Presbyterian Church. Holdeman is pastor of an affiliated church in Bloomington and a senior lecturer in biology at IU.

When Holdeman discovered Aaron was a medical student, he immediately thought of his daughter, Maggie, who would soon graduate from IU and was applying for medical school. He had an opportunity to introduce the two at a Thanksgiving service later that year. But the romantic connection was not immediate.

Aaron was “drowning in work” from his medical school classes: “After we met, I was like, she’s nice—but I’m busy.”

It was Maggie who pursued, inviting Aaron to IU’s Little 500 event in April 2018. Finally, she had captured his attention—and his heart. When they married 19 months later, Maggie was in her second year of medical school, while Aaron was a third-year student embarking on clinical rotations.

When the COVID-19 pandemic hit a few months later, studies went online, and the newlyweds were able to spend time together at a family lake house. Because of the temporary disruption to clerkships, Aaron and Maggie wound up doing their radiology rotations around the same time, prompting a rivalry on the final exam. Maggie studied hard, but Aaron figured he had an extra year’s experience on her, so he didn’t study much. They ended up with exactly the same score: 92.

Because Maggie was still in medical school when Aaron applied for residency programs, he limited his applications to programs in central Indiana. Now Maggie will have to do the same to stay with Aaron. With her intended specialty of physical medicine and rehabilitation, that leaves only one residency program in Indianapolis.

“It doesn’t make me feel super comfortable,” she admitted. “We’re just not going to get anxious about it.” 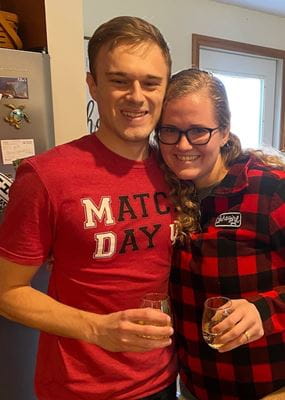 In the coming years, Maggie and Aaron will face more challenges as they desire to start a family while in the midst of demanding medical residencies. That’s another reason to stay near Bloomington, where they have a support network of family and friends.

If Maggie’s great-grandparents could do it, she figures they can, too. Her forebears met in medical school in the 1930s. Maggie’s great-grandfather specialized in internal medicine and surgery, while his wife practiced anesthesiology and pediatrics. Together, they operated a practice in South Bend, Indiana, where they lived right upstairs with their three children.

No matter what future challenges Maggie and Aaron face as they grow their family and their dual careers in medicine, they are glad to be doing it together.

“It’s helpful when one of us is going through busy times—studying for board exams or during residency,” Aaron said. “We can look at each other and truly say, ‘I understand.’”
The views expressed in this content represent the perspective and opinions of the author and may or may not represent the position of Indiana University School of Medicine.

Graduation 2022: Resilience through it all
Resilient IU medical resident a fierce advocate for equity and inclusion
Diversity needed: IU School of Medicine graduate seeks to change demographics in medicine's least diverse specialty
Moms in Medicine
Orientation 2022: Get involved during your first year of medical school