Meet Kun Huang, leader of the Department of Biostatistics and Health Data Science 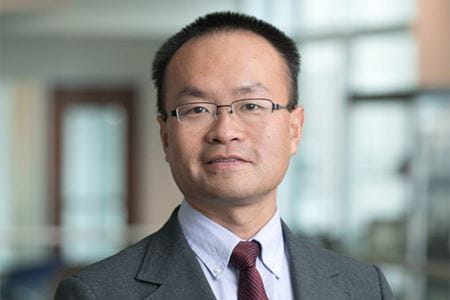 Kun Huang, PhD, MS, FAIMBE, assumed the position as chair of the Department of Biostatistics and Health Data Science (BHDS) at Indiana University School of Medicine on October 1, 2021, and brings a tremendous amount of research, education and leadership experience.

Since coming to IU School of Medicine in 2017, Huang has held a number of leadership roles:


Huang earned his undergraduate degrees at Tsinghua University in Beijing, China, and went on to complete his graduate studies at the University of Illinois at Urbana-Champaign, earning three master’s degrees and his PhD in electrical and computer engineering. He is also a Fellow of the American Institute for Medical and Biological Engineering.

How did your childhood experiences influence your interest in health data science?

I was born in western China, in the area neighboring Russia and Afghanistan. My family moved to central China when I was 5 to the city of Zhengzhou in Henan province, which is the largest state in China—it has about 100 million people! It was not the most developed at the time, and housing was a challenge there. It has the largest hospital in China with 15,000 beds. I grew up in a family of mathematicians, and I had a strong interest in biology.

What was your educational path leading to two bachelor’s degrees, three master’s degrees and a PhD?

I started with a major in biology at the leading university in China. The curriculum had a lot of requirements in computer programming and electric circuit design, so I got the dual degree in computer science. In biology, my interest was in neuroscience learning behavior. I came to the United States to do my master’s at the University of Illinois Urbana-Champaign and started working in a neurobiology systems lab. I got more interested in systems and the computational side of learning. After I got my master’s in physiology, I decided to study electrical engineering, focusing on machine learning. With the courses I had already taken, I was only one course shy from a master’s in mathematics, so that’s how I ended up with my third master’s. That made my parents really happy because they are both mathematicians. I did my PhD in electrical and computer engineering, and my dissertation involved a lot of robotics and mathematics. 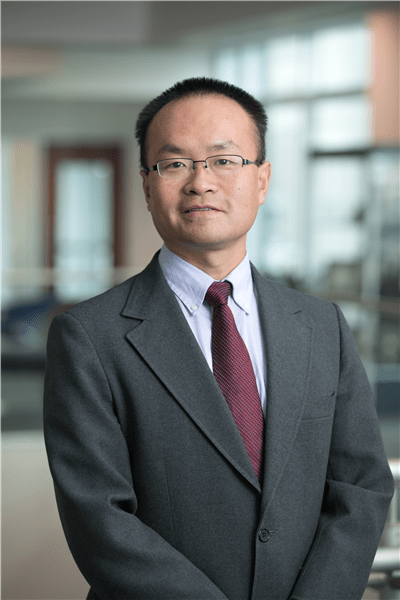 How did you start your career in health data science?

My wife, Jie Zhang, was my college classmate at University of Illinois—she got her PhD in biochemistry before I finished by PhD in 2004. At that time, she was a post doc at The Ohio State University. I saw an opening in biomedical informatics at the medical school at Ohio State. They wanted to recruit someone with a biology background for a new department in computational science. Everything fit. My wife started later at Ohio State in my department as a research scientist. Now she’s a faculty member at IU School of Medicine in genetics. We have been married 25 years and have been colleagues our whole careers and classmates before that.

How did your career journey lead you to IU School of Medicine?

By the time I left Ohio State, I was an associate dean for genome informatics. My interest was always on the translational side in bioinformatics. When I was approached for a position at IU School of Medicine, I had been collaborating with colleagues at IU for a long time. There are some really unique resources here like the Center for Genomics and Bioinformatics which make a huge difference for research. That’s why I was so excited for the opportunity to become the founding director of the Data Science and Informatics program for the Precision Health Initiative (PHI).

What was your leadership path to the role of department chair?

Earlier this year, we completed a merger of the Department of Biostatistics and the PHI data science informatics team to form the newly named Department of Biostatistics and Health Data Science. Chairing the department was a natural evolution of my role. Together with my BHDS colleagues, we will boost our research support, expand educational programs, partner with key stakeholders, develop a branding strategy and augment service lines. Additionally, we will establish a strong culture of diversity and inclusiveness.

What have been your department’s major accomplishments in recent years?

BHDS has developed a highly successful service program and is currently supporting more than 300 research grants. Faculty members are well covered by grants as collaborators, and our NIH grant funding ranks 11th nationwide. We have a very strong foundation and a really good opportunity as new technologies emerge and the role of data science and bioinformatics research continues to become increasingly important. We have recruited new members and now have a team of many biomedical data scientists and statisticians who are ready to lift our research and education programs to the next level.

Where do you see the Department of Biostatistics and Health Data Science in the next five years?

In the next five years, our main task ahead is to establish a world-leading biostatistics and translational data science program with high-impact discoveries, publications and grant funding. I want our members recognized as national leaders for their contributions and expertise. Emerging technologies include new algorithms, artificial intelligence/machine learning, new statistical methodologies and precision medicine. There is a lot of data being collected within all the centers at IU, and it’s not traditionally being integrated. We can integrate those data to make many new discoveries and then collaborate with people on the health systems side to translate those discoveries to improve people’s health in Indiana and worldwide. I see huge opportunities.