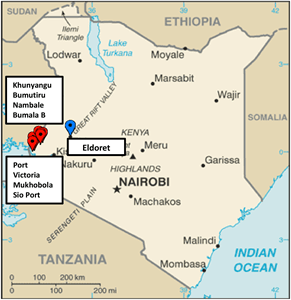 Clinic locations within the urban and rural study settings in western Kenya.

Tuberculosis (TB) is a significant issue in Africa. The World Health Organization (WHO) estimated that African countries had the highest rates of tuberculosis in the world, with an average of 280 cases per 100,000 people and reaching almost 700 cases per 100,000 people in some African countries. Almost a third of all cases of TB worldwide occur in the African region today.

In Kenya, for instance, tuberculosis is the fourth leading cause of death—with a majority of cases affecting people in their younger, more economically productive years (ages 15-34), according to a report published in 2017. Additionally concerning, a number of strains of tuberculosis are becoming multidrug-resistant (MDR-TB), meaning that they are very hard to treat.

Figuring out where MDR-TB is more common, though, is difficult and expensive. The WHO has advised organizations and countries to conduct national surveys to figure out where MDR-TB is a problem. These surveys can involve more than a thousand patients and cost hundreds of thousands of dollars.

Researchers working as part of the Indiana University-led Academic Model Providing Access to Healthcare (AMPATH) program in Kenya decided to try a different approach. Instead of a large national survey, the research team, including IU School of Medicine’s Adrian Gardner, MD, employed lot quality assurance sampling (LQAS), a method by which researchers can take smaller random samples from specific sub-populations to see if they meet a predetermined level of prevalence. The technique doesn’t try to come up with a national prevalence. Instead, it tries to identify areas of concern in the country, where limited resources can be targeted. Their results were published in the journal PLOS One.

LQAS was originally developed in the manufacturing sector, where it was used to perform quality assurance. More recently, it has been adopted in the public health setting. This is the first use of LQAS in Kenya for monitoring MDR-TB.

The IU and AMPATH researchers identified 105 patients with tuberculosis in both a rural and urban setting where officials suspected MDR-TB might be a problem. They later added in another 27 patients for further classifying strains. They determined ahead of time that having more than 5 percent resistance would qualify as a high-resistance region, and that having less than 1 percent resistance would qualify as a low-resistance region. Over the 18 months of the study, only two patients were diagnosed with MDR-TB in the urban setting, and only one patient was diagnosed with it in the rural setting. Therefore, both settings were classified as low prevalence.

This is good news for the two regions. But it’s even better news for the prospect of deploying this technique more widely in Kenya, and other countries in the African region. As the authors note in the conclusion:

As compared to countrywide surveys, targeted LQAS typically costs less than the average national survey price of $250,000-$300,000, given that fewer resources are needed to evaluate a smaller sample size, and typically has more rapid completion times. As a result, LQAS may offer tuberculosis control programs an alternative approach to evaluate levels of resistance in suspected localized hotspots or to investigate emerging resistance in the time between conducting larger surveys. Information about high or low levels of resistance may help inform programs as to the need to re-evaluate policies.

In the study, the researchers note ways to improve their technique to make it more accurate and faster. Continuing to work in this area will provide major benefits for patients in Kenya and beyond.

The research was supported by the World Health Organization’s Global TB Programme, the Fulbright U.S. Student Program, the USAID-AMPATH Cooperative Agreement and the National Institute of General Medical Sciences.

Photo: Clinic locations within the urban and rural study settings in western Kenya.