Smooth production in the brain factory: A breakthrough in Alzheimer’s research, Part Two 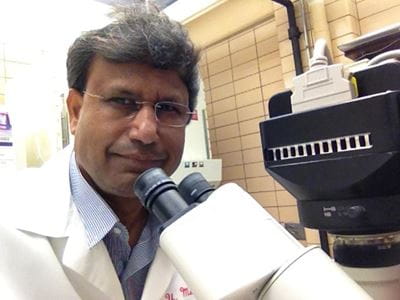 Lahiri leads the research team, and enjoys working with trainees on discovery of novel biomarkers and drug targets for Alzheimer’s disease. Drugs tested in the Lahiri lab have moved Phase 1 and Phase 2 clinical trials in human patients. One of the drugs targets an area of APP 5’-UTR, where a specific microRNA exerts its influence. He has also been co-awarded several US patents.

Experts at IU School of Medicine are using their vast experience in detecting new treatments and the research they uncover is paving the way for the future of medicine. And Debomoy Lahiri’s research is no exception.

A continuation of a Q&A with the Debomoy Lahiri, PhD and his recent research in Alzheimer’s disease.

What’s unique about this research?
This research is unique and innovative because instead of proposing to use a “foreign” chemical, we’re using natural components found in the human body, specifically miRNA, to treat a debilitating disease. Think of miR-346 as a light switch. We’ve discovered that by turning it on for a given amount of time we can reduce possibly toxic iron overdose in the brain, which can, in turn, reduce the risk of Alzheimer’s.

What’s new in your recent discovery?
Typical miRNAs have two features: They operate on the 3’-untranslated region (UTR) and they act to slow down protein production. What my colleagues and I discovered was an miRNA (miR-346) that looks like an opposite of the “standard” miRNA in the following way. First, it acts on the opposite end of the APP mRNA from most other miRNAs. It works through the 5’-UTR. Second, unlike other miRNAs, it increases its target (APP) levels. It’s like installing a controller on a molding press that can put it into overdrive, increasing production beyond ordinary levels. This is unusual among miRNAs.

Is all of this a self-contained process?
Not at all. As factory operations respond to outside pressures, like sales or changes in customer demand, levels of miRNAs (and mRNAs) can vary by changes in the environment. If demand for low-MPG vehicles falls, the “slow production” orders for low-MPG vehicle parts gets issued. If demand picks up, then “speed production” orders are sent to the floor. In fact, this is just like the role played by the Fe portion of FeAR. The body doesn’t make iron, it comes from the environment. If Fe is in low supply, more IRP1 binds to the APP 5’-UTR and interferes with miR-346 upregulating APP translation. However, if Fe is abundant in the cell, less IRP1 is available, since it binds Fe more strongly, and the miR-346 signal is more able to be active to upregulate APP levels. It should also be mentioned that other miRNAs can respond to lead (Pb), emotional stress, and any other environmental factors. We have recently talked a great deal about these processes and how they biochemically work in a top neurology journal, Lancet Neurology, in 2016 issue.

Healthy FeAR and normal neuron function. The APP mRNA contains the code used by neuronal cells for creating the APP protein molecule, a critical molecule implicated in Alzheimer’s disease. When iron (Fe) levels in a neuron are normal, a protein regulator called the iron responsive protein (IRP1) binds to the APP mRNA molecule and prevents the necessary cell machinery from binding to the mRNA molecule, such that mRNA code is not as efficiently translated into APP protein. However, binding of the small RNA, miR-346, to the same region of the APP mRNA prevents the binding of IRP1 and allows increased translation of APP mRNA into protein. IRP1 and miR-346 thereby act as an alternating switch to fine-tune the level of APP protein created by neuronal cells under conditions of normal cellular function. Disruption of this process, as a result of, for example high iron levels, might cause Alzheimer’s disease.

How did you come up with the acronym FeAR and what does it mean to our body functions?
As I stated earlier, miR-346 upregulates APP translation. This matters because the miR-346 target site overlaps with an active iron (Fe)-responsive element. We call this overlapping region the “FeAR” (Fe, APP, RNA) nexus. We found that, while miR-346 upregulates APP production, in some circumstances, it requires Fe to be reduced to have this activity. Of course, I am not going to drop into too much detail, like that’s another “part without instructions” picture. The surrounding elements give it meaning. In this case, the Fe-responsive element works by providing a place in the APP 5’-UTR for iron regulatory protein (IRP) to bind. This blocks APP translation. However, since APP has many healthy functions, turning it off completely wouldn’t be good thing. So IRP and miR-346 compete with each other for the same site. When miR-346 knocks IRP off, APP is translated. When IRP knocks miR-346 off, APP translation is shut down. Alternating back and forth provides balance. However, IRP also binds Fe. If Fe levels in the cell get high enough, when the IRP is knocked off the mRNA, it is more likely to bind Fe than the APP 5’-UTR. This ends up turning up APP translation. The extra APP transports Fe out of the cell, until the balance goes in the other direction, and IRP is free to block APP translation again. A healthy amount of FeAR must exist to maintain APP homeostasis, which is necessary for survival.Of course, the other miRNAs play a role as well, mostly in keeping levels of APP and BACE1 lower. We can’t forget that. Outcomes rely on multiple regulatory steps.

What do you hope will come from this research?
With further research, we’ll learn how long this signal (miR-346) needs to be kept on and how to apply this method to future patients encountering this disease. From learning more about how APP regulations of iron become disrupted in late stages of Alzheimer’s disease to understanding how someone’s environment impact their risk for Alzheimer’s—this research could potentially open up opportunities for drug regulation that can target amyloids in Alzheimer’s disease patients.

How do you test your findings and validate your results?
It is like a road test of an automobile under different field conditions. My lab members routinely measure biomarkers in a variety of samples, such as neuronal cultures, mouse hippocampi, human brain tissues and human plasma samples, from both control and affected subjects, using several different techniques. We then analyze results by statistical tools and discuss it our lab meeting, where all trainees participate.

Lahiri lab trainees. Front- Ruizhi Wang, MedNeuro graduate student, and back- William O’Neal, MD student) are presenting their work to other trainees at a conference in IUPUI.

After the “road test” do you do a “road show”?
Our equivalent of a road show is presenting our findings and discoveries at local, national and international meetings. This step is particularly important to obtain feedback from our peers. I particularly encourage my trainees to attend different meetings and learn from the experts.

Debomoy Lahiri, PhD, is a professor in neurobiology, psychiatry, and medical and molecular genetics Lahiri mentors MD, PhD students, postdoctoral and medical fellows, and residents during their educational and training careers. Lahiri is the founding editor-in-chief for “Current Alzheimer Research”, a peer-reviewed international journal that reports the neurobiology, genetics, pathogenesis, and treatment approaches of Alzheimer’s disease, for over the last 15 years. He is the Research and Education Core (REC) leader of the federally funded Indiana Alzheimer Disease Center (IADC). Lahiri has authored/co-authored over 300 peer-reviewed articles and has received research funding uninterruptedly by NIH since 1992. Learn more about IU School of Medicine’s expertise in Alzheimer’s disease research and education.