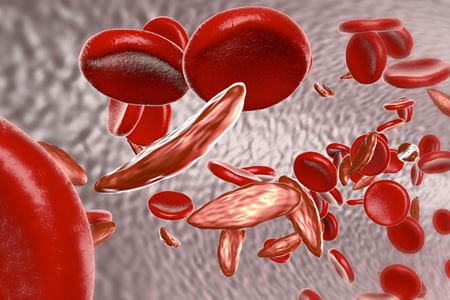 When people have two genes that are associated with sickle cell, they develop the disease, which can distort red blood cells into a sickle, or crescent, shape. When they have only one gene, they are usually asymptomatic. While sickle cell disease carries with it significant morbidity and mortality, being heterozygous (having one gene) has been found to be protective against malaria.

This seems like an odd finding, but it’s possible that this is one of the reasons that the gene for sickle cell disease has survived for so long. While two genes are debilitating, one gene is a potential lifesaver.

In fact, previous small studies have shown that children with sickle cell disease who develop severe malaria have a high mortality rate. The two genes may not be protective or even irrelevant; they may be harmful.

In a recent paper published in Pediatric Blood and Cancer, which was co-authored by IU School of Medicine faculty members Estela Shabani, PhD, and Chandy John, MD, researchers sought to examine whether this was true. Are children with severe malaria (cerebral malaria or severe malarial anemia) higher risk if they have sickle cell disease?

The study took place at Mulago National Referral Hospital, in Kampala, Uganda from 2008 through 2013. Children between 18 months and 12 years of age who had severe malaria were eligible for the study. They were all treated according to usual practice, and were followed up for two years after they were discharged from the hospital with respect to further malarial illness, readmission to the hospital, or death.

Community controls were also enrolled. These were healthy children from the same neighborhoods as those with severe malaria, and they were used as a comparison group.

Over the course of the study, 267 children with cerebral malaria and 232 children with severe malarial anemia were followed, along with 216 community controls.

As the authors note:

Of course, this would best be confirmed by a large, prospective study, which the authors do call for. In the meantime, though, this is evidence that children with sickle cell disease are not at increased risk from severe malaria.