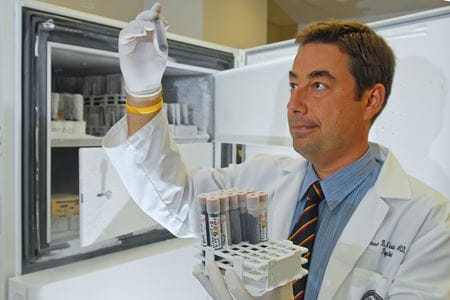 Briefly, what are the key three or four points people should take away from this study?

First, suicide is multifactorial, but the risk factors can be assessed in a systematic way, including through the blood tests we are developing.

Second, there are different subtypes of suicide risk and different high risk psychiatric diagnoses, each with its own best blood test.

Third, there are new medications and natural compounds that are indicated by the gene expression signatures in the blood that may be useful to develop for preventing suicide in individuals at risk.

All these approaches can and should be tailored to each individual, as is happening already in cancer.

You and your team have published studies identifying potential suicide biomarkers in the past, for both men and women, as well as the development of apps for clinical testing. How does this new research expand on those previous studies?

In this new work, we have developed a more precise way of diagnosing suicide risk, by developing blood tests that work in everybody, as well as more personalized blood tests for different subtypes of suicidality that we have newly identified and for different psychiatric high risk groups.

We also show how two apps based on a suicide-risk checklist and on a scale for measuring feelings of anxiety and depression work along with the blood test to enhance the precision of tests. Lastly, we identify a series of medications and natural substances that could be developed for preventing suicide. Our work provides a basis for precision medicine and scientific wellness preventive approaches.

How close are these findings and applications to being put into use by clinicians?

I would think that over the next year or two some of our tools will start being used by early adopters and clinicians, especially the apps, as an add-on to the current standard of care. We have additional upcoming publications showing their utility. There are certain rules and regulations for blood tests, and any translation from research to clinical practice will have to comply with those. Given the fact that a person dies by suicide every 40 seconds worldwide and that this is a preventable tragedy, my colleagues and I will work very hard to accelerate this process.

What is your “within-participant” research design, and what are its benefits for discovering potential biomarkers?

This is a very hard-to-do but powerful approach, where you follow people longitudinally with serial blood tests and see what changes inside each person when they switch to an illness state, in this case intense suicidal ideation. It eliminates a lot of the noise and genetic variability that you would have if you compared different individuals, where you would need thousands of people to get any reliable signal. We have pioneered it in psychiatric biomarker research, but it has been independently used successfully in other fields, notably by Mike Snyder and his group at Stanford and Lee Hood and his colleagues in Seattle.

Suicide occurs due to multiple factors: life events, mental health, physical health, environmental stress, addictions, cultural factors. Indeed, the checklist app for suicide risk assessment (Convergent Functional Information for Suicidality, CFI-S), which tells you who a person is and what has happened to them, as well as the visual analog app for assessing anxiety and mood (Simple Affective State Scale, SASS), which tells you how the person feels, are powerful predictors.

The blood biomarkers have their place, as they are an objective way of assessing a biological predisposition, and of monitoring response to interventions and treatments. The best results, as in other fields of medicine, such as cardiology, are when you combine the above in a predictive algorithm.

One can also add to that, of course, a direct query about suicidality, as is common clinical practice. We wanted to see if we could develop other, more indirect predictors, as you cannot rely on individuals always being truthful about their suicidal ideation or intent, for fear of being stopped or stigmatized. We were successful and our predictors may be there early on, opening the door to preventive approaches.

What are the implications of the findings regarding the APOE and IL6 genes.

Those findings are interesting from a mechanistic standpoint. Some degenerative and inflammatory processes may increase the risk for suicide.

What is your group’s “life-switch” hypothesis, which you reference in your paper?

Independently of our suicide work, we conducted some translational studies on how mood and stress may affect longevity, the first of which was published in 2016, in collaboration with Petrascheck and colleagues at Scripps and Saykin and colleagues at IU.

We observed that some of the same biomarkers were changed in one direction in our suicide work and in the opposite direction in the longevity work, suggesting to me that there may be an active biological “switch of life” that gets flipped by mood and stress in one direction or the other, depending on how you are perceiving your life to be going, well or not.

Additional evidence is accumulating, including at the level of biological pathways and drugs that may modulate this switch. If we are correct, this is a major discovery. Stay tuned for an upcoming paper on this.

Additional information about Dr. Niculescu’s work is available at his laboratory website.