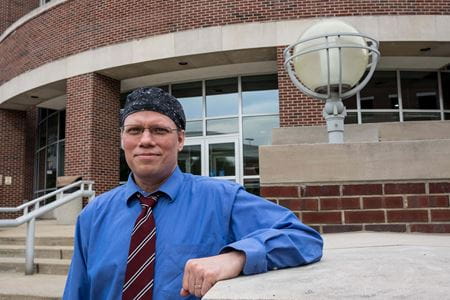 For a scientist, precision medicine means unlocking genomic secrets that make it possible to target medications and treatments precisely. For a physician, it means the ability to deliver the right medication to the right patient at the right time. For the patient, it means hope for better care and faster recovery.

For Brian Decker it means all three.

As an associate professor of clinical medicine in the Indiana University School of Medicine Department of Medicine, Dr. Decker’s research centers on pharmacogenomics, the study of how a patient’s genetic makeup affects how that patient’s body processes a drug, how effective that drug may be for that patient, and what side effects the patient might encounter. Dr. Decker is a co-investigator of one of the nation’s largest studies of the benefits of using pharmacogenomic tools in patient care at Eskenazi Health and IU Health.

As a physician he sees patients regularly at IU Health and Eskenazi, trying when possible to take pharmacogenomic shortcuts past the traditional trial and error processes of prescribing, adjusting and sometimes changing medications for many different medical problems.

And at all times he’s glad that the tools of precision medicine were available to improve the chemotherapy regimens he’s undergone fighting cancer for more than a year.

In Dr. Decker’s case, the tumor was diagnosed in his right arm when the swelling lingered on from an injury sustained while teaching Tae Kwon Do. (The diagnosis was delayed by a bout of kidney stones. Later, when undergoing left lung surgery to remove a tumor, it was revealed that he had ongoing pneumonia, which delayed identification of another tumor. It was, said Decker, “a little rough year.”)

Dr. Decker’s first round of chemotherapy didn’t accomplish much – the tumor in his arm continued to grow. So he underwent surgery to remove it, followed by a round of radiation treatments. He’s subsequently had tumors surgically removed twice in his left  lung, and a third surgery of his right lung is  scheduled for mid-September.

More significantly in his mind, Dr. Decker underwent genomic testing, of both him and the tumor, resulting in a narrowed list of chemotherapy options that led to a second round that appears to be more effective.

“It didn’t lead to a magic bullet, but it helped narrow the choices, it helped give the oncologist a better idea of what might work,” he said.

To him, even in the absence of a magic bullet, the results demonstrate the power and potential of pharmacogenomics and precision medicine. Dr. Decker’s been interested in that potential for a long time, back to his career as a pharmacist.

“How medications work, how we can make them work better, has always been part of my hard-wiring,” he said. Enough so that he decided to attend medical school, enrolling at IU at the “old” age of 32 and graduating in 2000. After an internal medicine residency and a nephrology fellowship, he joined the faculty as an assistant professor of clinical medicine in the Division of Nephrology in 2007.

Initially his research focused on medications prescribed to patients undergoing dialysis, an interest that has shifted to his current work in clinical pharmacogenomics.

He is a co-investigator of an NIH-funded study called INGenious (Indiana Genomics Implementation: An Opportunity for the Under Served), begun in 2015 to study the potential health and cost benefits of pharmacogenetics testing. Patients enrolled in the study – which began at Eskenazi Health and has since been expanded to include IU Health – undergo testing for genetic variants known to affect how patients respond to more than two dozen commonly used medications. It’s one of the largest such research efforts in the nation – some 700 patients already have been enrolled to be tested, and many more than that included in the “control” arm of the study to receive care without the testing.

Dr. Decker and colleagues are also in the early stages of a study to assess the benefits of genotyping for patients who are being treated for high blood pressure. That study is funded by the IU Precision Health Initiative, part of IU’s Grand Challenges program.

“We’re trying to determine whether this really makes a difference in how well a patient responds to an anti-hypertensive. Say they had a gene marker that indicated they would respond best to a beta blocker. If you made a change to the regimen and put them on a beta blocker, did it improve their blood pressure control or did they have fewer side effects?”

Dr. Decker fits his research into a schedule that also includes seeing patients weekly at clinics at IU Health University and Eskenazi Health hospitals, and overseeing the nephrology fellowship program as its director.

While engaging in research necessary to document the extent to which pharmacogenomic testing produces real-world health and cost benefits, the research, patient care and his personal struggle with cancer have left Dr. Decker convinced.

“Pharmacogenomics is just the next logical step in making drugs better and safer for patients. I’ve always felt that way. Obviously with my personal experience, you couldn’t find a better proponent for that,” he said.

“When a patient comes into the hospital or the clinic it needs to be done, because it impacts so many different medications. It’s a critical part of clinical care so that doctors are no longer just using trial and error with medications.

“I believe it needs to be the standard of care.”