Podcast: Of Zebrafish and Diabetes Research 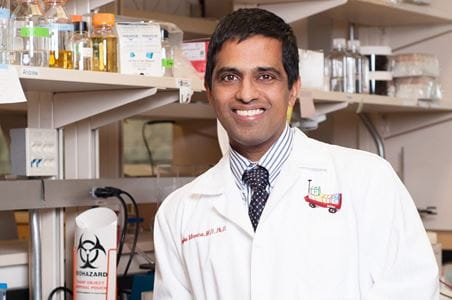 Dr. Raghu Mirmira, director of the Center for Diabetes and Metabolic Disease at IU School of Medicine.

The term “diabetes” represents a group of complex metabolic disorders that result in having too much sugar in the blood, which is dangerous (and even deadly) because frequent or ongoing high blood sugar can cause damage to nerves, blood vessels and organs. There are currently three major types of diabetes: Type 1 diabetes, Type 2 diabetes and gestational diabetes.

In this month’s episode, Carroll and Mirmira discuss how personalizing treatment helps people with diabetes better manage such a complex disorder. And Mirmira explains how research being done at IU School of Medicine and as part of the IU Precision Health Initiative is advancing diabetes management and prevention approaches in Type 2 and gestational diabetes, as well as exploring curative therapies for Type 1 diabetes.

The IU Precision Health Initiative, for which Mirmira leads the diabetes research team, aims to cure and prevent diseases prevalent in Indiana by studying all the factors—such as genetics and lifestyle—that influence a person’s health.

The Healthcare Triage podcast is sponsored by IU School of Medicine and the IU Precision Health Initiative to raise awareness about the diseases in scope for the initiative and IU’s leadership in these areas.