From one generation to the next, research offers a world of opportunity 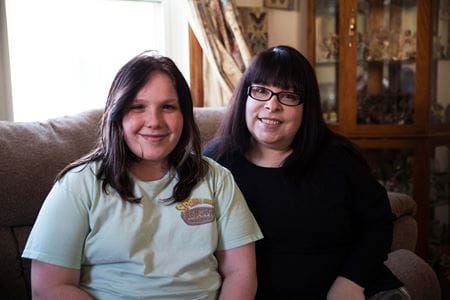 Those are the words Debbie Moore uses to describe her son Colton who, at 16 months of age, was diagnosed with a deforming bone disorder called X-linked hypophosphatemia (XLH). Both uncommon and painful, XLH causes rickets and osteomalacia, or softening of the bones. Patients are typically diagnosed during childhood and have bowed legs, short stature, and experience bone pain and dental abscesses.

Debbie knows firsthand the debilitating effects of XLH. Diagnosed with the disease at 18 months, she spent much of her childhood wearing leg braces. She also underwent several surgeries to remove pieces of bone from her femurs and tibias in an effort to straighten her legs.

Debbie also knew there was a 50/50 chance of her children inheriting XLH. Colton fell into the 50 percent who develop it.

“You could see from birth that his Colton’s legs were bowed,” Debbie said. “But it wasn’t until he was about 7 or 8 that the XLH began having an impact in his day-to-day life. He started having to use tables and chairs – whatever was around – to pull himself into a standing position if he was sitting down. We had to do something.”

Debbie knew exactly who to turn to for help: Michael Econs, MD. Econs, chief of the Division of Endocrinology and Metabolism at Indiana University School of Medicine, had been Debbie’s physician for years. He is also a trailblazer for XLH research and began treating patients with the disease in the mid-1980s.

“With XLH, your kidneys essentially view phosphate in the blood as waste and gets rid of it,” Econs said.

Phosphate is essential for the growth and repair of body cells and tissues. Approximately 85 percent of the body’s phosphate supply is found in bone.

When he was 8-years-old, Debbie enrolled Colton in a clinical trial, led in part by Erik Imel, MD, to test a developing therapy based on the research of Econs and his colleague, Kenneth White, PhD, the school’s David D. Weaver Professor of Genetics. The goal of this therapeutic drug – burosumab – was to normalize phosphate in the blood, which in turn would heal rickets, improve the bowing of legs, reduce pain and stiffness, and promote bone healing.

Colton, now 12, has been taking burosumab for four years. Debbie says Colton’s improvements have been nothing short of extraordinary.

“When Colton began this trial, his toes and feet were so turned in, he would literally trip over his own toes. Now, he loves running around outside with his friends and roller skating. He has even performed as part of the Peru Amateur Circus for a few years.”

Traditionally, patients like Debbie and Colton were treated for XLH with high-dose Vitamin D and phosphorus several times a day. Now, Colton receives an injection of burosumab every two weeks. He will continue taking the drug until the growth plates in his legs fuse together.

“It’s amazing to see Colton thrive,” Debbie exclaimed. “The world closed up for me. I had always wanted to become a nurse but I knew after high school, that was no longer in the cards for me. Colton’s world is wide open for him to do and to be anything he wants. The medical advancements that have been made between when I was a kid and now are astounding.”

Econs’ 30-year journey that led to the development of burosumab recently hit a monumental milestone. On April 17, 2018, it received approval by the U.S. Food and Drug Administration (FDA) to treat adults and children living with XLH.

“We’re so fortunate to have been a part of this experience,” Debbie said. “Dr. Econs has been working on this medication for nearly two-thirds of my life, and I’m so happy Colton and other children now have the opportunity to live fulfilling lives because of this research.”

Debbie offers words of advice for other parents whose children have been diagnosed with disease.

“If your child has the opportunity to qualify for a clinical study, go for it. The technology and the medical advancements are there so let’s use it.”