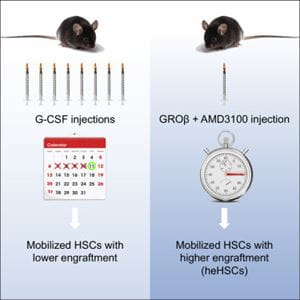 Many people in need of a transplant today struggle to find suitable donors or mobilize sufficient numbers of their own blood stem cells. I’m working to change that as part of my research with a multi-institutional team of investigators at Indiana University School of Medicine, Massachusetts General Hospital Cancer Center, the Harvard Stem Cell Institute, and Glaxo SmithKline.

As reported in a study published in the Jan. 11, 2018, issue of the journal Cell, our research team has developed a new method of harvesting blood stem cells for bone marrow transplantation that makes the bone marrow donation process quicker and easier for donors and allows for the collection of stem cells that are superior to those collected by the current standard method. This one-injection, one-day procedure has the potential to increase the bone marrow donor pool as well as facilitate stem cell collection in difficult patient groups.

The current standard to harvest life-saving blood stem cells requires multiple daily injections of the drug G-CSF that causes blood stem cells to leave the bone marrow and enter the bloodstream. This process is called “mobilization” and requires five or more days of injections that can cause adverse effects ranging from bone pain, nausea and vomiting to rupture of the spleen. After the stem cells have entered the blood, they can be collected for bone marrow transplant by apheresis, a procedure similar to donating plasma or platelets. This collection process takes several hours and more than one collection is sometimes needed to collect sufficient numbers of cells for a successful transplant.

This new stem cell collection method is the culmination of 25 years of my work from laboratory bench to bedside, back to bench. My lab team started by purifying and cloning a molecule that was induced by a previously known hematopoiesis regulator. The new molecule was found to be synergistic for regulating hematopoiesis, but unexpectedly also resulted in mobilization.

This work was started while I was a lead scientist at SmithKline Beecham. The identified molecule turned out to be GRO (growth regulated oncogene)-beta, which our team then brought to clinical development and a phase 1 trial. While GRO-beta was safe and well tolerated in human volunteers, it only had a modest ability to mobilize stem cells into the blood. Later, after I joined the Department of Microbiology and Immunology at IU School of Medicine, I established a collaboration with AnorMed to study one of their drugs known as AMD3100, which is now FDA approved to boost stem cell mobilization when G-CSF works poorly. After evaluating multiple combinations and timing of treatments, my team found that a single injection of GRO-beta and AMD3100 at the same time caused blood stem cells to rapidly mobilize from the bone marrow to the blood. Remarkably, the amount of stem cells in the blood was equivalent to a multi-day regimen of G-CSF, the current standard of care.

I have long been interested in improving stem cell collection. Several years ago, in collaboration with Dr. Jonathan Hoggatt, the lead author on the current study and my former graduate student at IU School of Medicine, we demonstrated that drugs similar to aspirin could double the effectiveness of G-CSF mobilization. Continuing the collaboration with Dr. Hoggatt, now an assistant professor of medicine at Harvard Medical School and Massachusetts General Hospital, our team used highly sophisticated stem cell technologies to demonstrate that the new rapid mobilizing combination resulted in stem cells that could produce blood quicker, and more robustly, than those from common methods including G-CSF. We found that these stem cells had a deep-rooted potential that made them better at engraftment into the bone marrow after transplant. Surprisingly, these newly defined highly engraftable hematopoietic stem cells (heHSCs) had a gene expression profile like fetal liver hematopoietic stem cells, which traffic to the bone marrow shortly before birth.

We are looking forward to further study into the potential clinical utility of the rapid mobilizing regimen and the highly engrafting blood stem cells that it produces, as the ability to acquire highly engraftable blood stem cells with the GRO-beta and AMD3100 combination may make mobilization and collection of stem cells easier and less lifestyle disruptive for normal donors

Louis Pelus, PhD, joined IU School of Medicine in 1999. The recipient of multiple research grants, Dr. Pelus's areas of research focus on understanding production and regulation of the stem cells that form the cellular elements of blood and how these reg...