Medicaid Expansion Associated with Fewer Diabetes-Related Hospitalizations in Some States 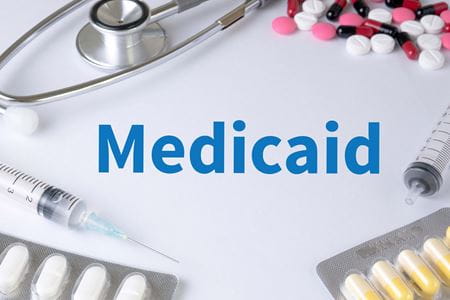 One of the great parts of working at IU School of Medicine is getting to interact with some of the amazing researchers at other IU schools, like the School of Public and Environmental Affairs (SPEA). Some of us just published a paper together, “Changes in inpatient payer-mix and hospitalizations following Medicaid expansion: Evidence from all-capture hospital discharge data“:

Context: The Affordable Care Act resulted in unprecedented reductions in the uninsured population through subsidized private insurance and an expansion of Medicaid. Early estimates from the beginning of 2014 showed that the Medicaid expansion decreased uninsured discharges and increased Medicaid discharges with no change in total discharges.

Objective: To provide new estimates of the effect of the ACA on discharges for specific conditions.

Design, setting, and participants: We compared outcomes between states that did and did not expand Medicaid using state-level all-capture discharge data from 2009–2014 for 42 states from the Healthcare Costs and Utilization Project’s FastStats database; for a subset of states we used data through 2015. We stratified the analysis by baseline uninsured rates and used difference-in-differences and synthetic control methods to select comparison states with similar baseline characteristics that did not expand Medicaid.

Past analyses have shown that the Medicaid expansion was associated with decreases in hospital stays that were uninsured and increases in hospital stays covered by Medicaid, without any real changes in total hospitalizations. That’s somewhat intuitive, but it’s good to know there’s proof. We wanted to see if the Medicaid expansion had any effect on hospitalizations for specific conditions.

We used the Healthcare Costs and Utilization Project’s FastStats database from 2009-2014 (sometimes 2015) to compare states that did and didn’t expand Medicaid. We were interested in the total and condition-specific hospital stays and the share of such stays by insurance coverage. Specifically, we were interested in births, surgeries, mental health stays, injuries, and diabetes. We stratified these analyses by baseline uninsured rates, because it may be that states that started with more uninsured might see more of an effect.

We found that, as other studies have, that uninsured stays fell in the states that expanded Medicaid that had low uninsured rates beforehand (absolute drop of 4.4 percent) and those that had high uninsured rates beforehand (absolute drop 7.7 percent). Medicaid covered stays also went up in both types of states (6.4 percent and 10.5 percent respectively). The total number of stays didn’t change, nor did the condition-specific stays for most issues.

However, with respect to diabetes, they did. Hospitalizations for diabetes with a high level of uninsurance beforehand fell 0.4 percent in states that expanded Medicaid. We had some thoughts on why this might be the case:

This result is surprising because individuals with diabetes were more likely to have insurance than those without diabetes before the ACA. However, diabetes has increased significantly among low-income populations over the last several decades, and today half of all uninsured adults with diabetes have incomes low enough to qualify for Medicaid under the ACA. Indeed, recent work demonstrates that adults were more likely to have been diagnosed with diabetes in Medicaid expansion states after the Medicaid expansion and that prescriptions for diabetes management increased the most, of all medication categories, under Medicaid after 2014 in expansion states. If the Medicaid expansion resulted in better access to care for undiagnosed patients with diabetes, then it is possible that hospital utilization could change as well. Many of those newly eligible for Medicaid under the ACA were offered Medicaid managed care, which may better coordinate care of beneficiaries and thus result in avoided hospitalizations.

You may argue that a 0.4 percent change is small. But we did some back-of-the-envelope calculations using data from HCUP. In 2008, the average cost of a diabetes-related hospital stay was over $12,500 in 2017 dollars. Given our results, a rough estimate of the possible reduction in inpatient diabetes care might be $478 per 1,000 population in states that had a high level of uninsurance before the expansion, like Arizona. Therefore, since Arizona had just under 7 million citizens in 2016, the expansion might have saved them about $3.3 million in diabetes-related inpatient stays.

All studies have limitations that warrant consideration, of course, and this study – like all studies – needs replication and further examination. But understanding how the ACA has affected total hospitalizations, by specific type and the payer composition facing hospitals, is especially important as policymakers consider changes to the law.