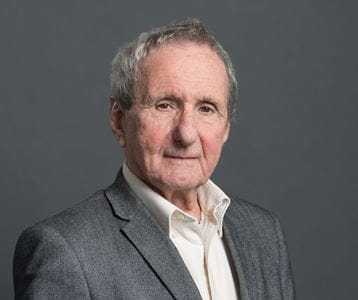 Dr. Hendrie, who is professor emeritus of psychiatry at IU School of Medicine, distinguished scientist at Regenstrief Institute and center scientist at the IU Center for Aging Research, was recognized for his many contributions to furthering the understanding of dementia and its risk factors—particularly as they apply to diverse populations, including African Americans living in Indianapolis and Yoruba living in Ibadan, Nigeria.

Dr. Hendrie is a generative force in the study of dementia both at IU and around the world. He is a co-founder of IU School of Medicine’s Indiana Alzheimer Disease Center, along with Bernardino Ghetti, MD, and P. Michael Conneally, PhD. And he helped establish the first Alzheimer’s disease clinic with Martin R. Farlow, MD, at IU Hospital. Dr. Hendrie served as a principle investigator for the Indianapolis-Ibadan Dementia Project, the largest and longest-running National Institute on Aging-funded study of its kind, which was one of the first studies to identify the link between risk factors for cardiovascular disease and dementia. It also emphasized the importance of studying the interaction between genetic and environmental risk factors in determining dementia risk in populations.

Together with Kathleen Hall, PhD, and his international colleagues, Dr. Hendrie also developed the Community Screening Instrument for Dementia—a culturally fair, harmonized clinical assessment system that is now used in studies throughout the world.

Dr. Hendrie said he is particularly delighted that the lifetime achievement award comes from the Alzheimer’s Association, an organization whose advocacy and devotion have been crucial in obtaining both public and private funding for Alzheimer’s disease research.

“I was very thrilled and very pleased,” Dr. Hendrie said. “(Alzheimer’s) is a devastating disease, so I feel like anything I can do to contribute to help the plight of these individuals and their families would be something I would be proud of.”

He said he views the honor as something he shares with his many colleagues throughout the years.

“I was working in partnership with a remarkable group of investigators from Indianapolis, Ibadan, Canada, Jamaica, China and beyond,” he said. “I believe I’m receiving this award on behalf of all of them.”

Dr. Hendrie continues working to better understand Alzheimer’s disease and dementia at the Regenstrief Institute and the IU Center for Aging Research. He said IU has been a great place to work because of the ability researchers and clinicians have to collaborate across disciplines.

“It’s been a wonderful opportunity to work here,” Dr. Hendrie said. “One of the things that IU and the Regenstrief Institute has is the opportunity and encouragement to collaborate with other groups, creating an ideal atmosphere to produce and support creative, interdisciplinary research.”