Getting Out of Bed: Virtual Reality in the ICU 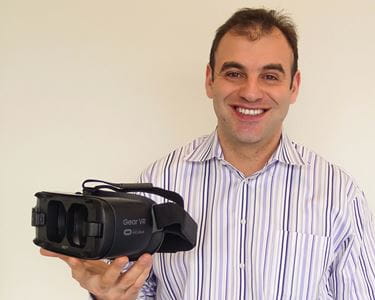 A promising new treatment for intensive care patients will involve getting them out of their beds taking them to a beach, or to their homes, or even the hills of Iceland.

Dmitriy Golovyan is a fellow within the Indiana University School of Medicine Department of Medicine, currently training at the IU Center for Aging Research. When he first started his rotations in the ICU, he saw a serious problem.

“I did enough ICU shifts and saw enough delirious patients in the unit during residency to start to think of the stay as a truly frightening experience,” said Golovyan. “Since then, I have also learned of the harrowing consequences of that experience, including long-term anxiety, cognitive decline, and even post-traumatic stress experienced by a majority of our patients.”

Over the past year, Dr. Golovyan has been developing a way to help critically ill patients with one of the most frustrating parts of their stay in the ICU – being stuck in bed. “Patients are often tied to the bed, uncomfortable, and reclined in the bed in such a way that their entire field of view is ceiling tiles, and occasional providers coming and going from their bedsides”.

According to a 2014 study, the average length of stay in the ICU is three-and-a-half days. What’s more, for every day a patient spends in critical care, they’re likely to spend an additional half-day in a non-critical care bed. This length of time spent in a bed can add up to some severe side effects. In addition to the trauma of recovery and intubation, patients who spend more time in bed have a higher risk of developing delirium, a serious mental condition that can have lasting effects.

Patients who participate in Dr. Golovyan’s study receive a virtual reality headset with pre-loaded landscapes. While intubated and physically confined to their hospital beds, patient participants are visually released into a more soothing and cognitively stimulating reality, such as a park, or a beach, a sculpture garden, or even into their home.

“My idea is that visually taking the person out of the environment that we know to be harmful, and putting them in a place where they can be comfortable, engaged and feel safe can reduce their pain and anxiety,” Golovyan says. “It can also do something more than that – it can help to preserve their mental and cognitive function so commonly becomes chronically impaired after intensive care unit admissions.”

While there are other initiatives that have been developed by physicians at the IU Center for Aging Research to help patients become more mobile, Golovyan’s work does it in a brand new way – through virtual reality.

Phil Lofton is the Communications Manager for the Indiana University Center for Aging Research at the Regenstrief Institute. He focuses on sharing stories about healthcare innovation and research advancements, especially in geriatrics.