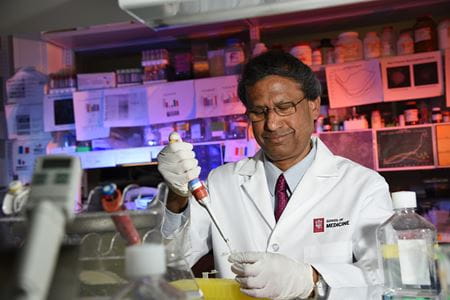 Debomoy K. Lahiri, PhD, is a professor of neurobiology with IU School of Medicine.

It is often through collaboration where one finds some of the greatest research ideas and discoveries. At Indiana University School of Medicine, dozens of subject-matter experts currently use their unique skill sets and areas of interest to further the public’s understanding of some of the most challenging neurodevelopmental disabilities.

Debomoy Lahiri, PhD, Deborah Sokol, MD, PhD and research analyst Bryan Maloney have recently published in the journal Frontiers in Psychiatry regarding their discovery of a fork in the road when it comes to autism and Alzheimer’s disease research. This continues their other work on autism and the related fragile X syndrome previously published in Scientific Reports and Molecular Psychiatry).

These studies illustrate the groundbreaking research on Alzheimer’s disease being conducted in the Lahiri lab. In particular, they identified small RNA molecules, a specific set of microRNAs that regulate production of the large β-amyloid precursor protein (APP), which plays critical roles in Alzheimer’s disease. For example, microRNA-101 and microRNA-153 independently reduced levels of APP, and the toxic β-amyloid peptides (Aβ) that are cut from the APP chain. Such research could create a way to tackle Aβ peptide aggregates deposited extensively as amyloid plaques in brains of people with Alzheimer’s disease.

In addition to their work with Alzheimer’s disease, Lahiri’s group is also busy researching a different illness—the autism spectrum disorder. The Lahiri lab team, including past trainees ( Balmiki Ray, MD, Justin Long, MD, PhD and Baindu Bayon, PhD) and Sokol have discovered the same proteins, yet entirely different results, in disorders at opposite ends of the human lifespan. They followed the molecule and saw where it went.

A breakdown of the research

The researchers said this is likely related to the predominance of one processing path over another for the same protein. The “anabolic hypothesis” to explain autism has been investigated for many years by the IU team, who had originally proposed it in Journal of Child Neurology and Frontiers in Cellular Neuroscience. This model is based on observation that brains of autistic children have many more neurons in critical areas than do brains of non-autistic people. Several proteins have been investigated to explain this phenomenon, but most have fallen along the wayside.

Several years ago, Lahiri and Sokol’s groups found that elevated levels of a protein that were associated with neuronal growth, secreted amyloid precursor peptide-α (sAPPα), were associated with some forms of autism. More recently, Lahiri, Sokol and Maloney discovered that Aβ peptides were reduced in autism plasma and brain tissue samples. Aβ is a product of full-length APP, when it is processed by the “amyloidogenic” pathway. Notably, sAPPα is a product of APP processed through a non-amyloidogenic, or “anabolic” pathway.

An APP molecule cannot be processed by both pathways, which led the research team to ask the question: can effects of certain known pathways in Alzheimer’s disease, or more accurately, the opposite pathways, be applied to modeling autism to further understand the disorder and provide additional research options and new drug targets?

The most active pathway in all individuals is the α-secretase pathway. However, in Alzheimer’s disease the amyloidogenic pathway becomes more relatively active to disrupt normal function, although it is not conclusively known whether this is entirely through BACE1 excess, ADAM reduction or a critical combination of both. In any case, the result is a net relative reduction in sAPPα and an increase in Aβ.

In autism spectrum disorder, the imbalance appears to go the other direction, where a combination of greater ADAMs activity and/or reduced BACE1 activity leads to an excess of sAPPα and a deficiency of Aβ. The collaborative research at IU School of Medicine unearthed the concept where an early-life disorder of brain overgrowth could be a molecular inverse of a late-life disorder of brain loss.

Indeed, the Lahiri lab has always been fascinated with the early-life exposures and their effects on disorders across human life span, as they discussed in Lancet Neurology and Neurotoxicology)

The fork in the road

What would be the broader impact of this work linking two disorders via a well-studied molecule and pathway? Lahiri, Sokol and Maloney are looking at a larger human data set collected by the MGH/Harvard group to follow one hypothesis that came from these discoveries. They are basing their work on applying the principle of heterozygote protection with another recent discovery of the “Broader Autism Phenotype” (BAP). Heterozygote protection is the phenomenon that carrying one copy of a gene allele that leads to a genetic disorder, such as sickle cell, could protect against another disorder, such as malaria. This protection ends up maintaining the vulnerable allele in the population, even if getting a “full dose” is usually fatal. BAP refers to behavioral traits that have been commonly found in close relatives of autistic people but do not constitute a disability. BAP, or even milder conditions, may confer protection against Alzheimer’s. If proved, this could result in effective new treatments for the late-life disorder.

Lahiri added that differences in the two disorders, and their opposite effects on the brain, makes separate drug-target engagement necessary.

“It’s important to note that we’re not looking for one treatment strategy that can be applied to both,” Lahiri said. “We’ve essentially taken a flashlight and are showing what’s on the other side of our Alzheimer’s disease research, which happens to be new lead in research for autism.”

There is a stage in brain development when it is normal for everything to overgrow, but eventually the brain begins to prune back what isn’t used. If the pruning is interfered with, you can have abnormally high levels of growth.

“We found deficiencies in beta-amyloid, which could be a sign of under pruning, eventually leading to autism,” Maloney said.

Lahiri was quick to point out that none of their work exists in a vacuum. Autism shares some symptoms with Angelman and fragile X syndromes. His lab also works with other leading basic and clinical researchers across the country. Chasing the APP “alley” with its several small “trifurcations and lanes” (metabolites), including roles for APP processing in Angelman, they started a fruitful collaboration with Craig Erickson, MD, of Cincinnati Children’s Hospital Medical Center. Their joint study of Acamprosate on APP biomarkers in youth with autism spectrum disorders and fragile X has identified important roles of APP pathway and resulted federal grants from Department of Defense (DoD), as well as patents, as published in the Journal of Psychiatric Research.

Likewise, Lahiri and Sokol are working with Cara Westmark, PhD, of University of Wisconsin School of Medicine with her fragile-X mental retardation protein knockout animal model to further understand the neurobiology of fragile X. This back and forth collaboration among mechanistic studies (in human neuronal cultures), appropriate animal models and human studies (biomarkers and drug studies) are important ways to move drugs from concept to the clinic.

Lahiri’s team hopes to continue to unveiling the biochemical basis of autism spectrum disorder by using the knowledge gained from Alzheimer’s disease studies—conducting a rare combination of research on two disorders in a unified way. This small but mighty discovery helps open the discussion for modulating both α- and β- secretases. Additionally, it allows more direct questions to be asked regarding how both Alzheimer’s disease and autism spectrum disorder are addressed and researched. However, additional funding is needed in order to learn more and answer difficult and unique questions.

From understanding the interplay between brain growth and pruning at all life stages, not just childhood, and digesting imbalances between sAPPα and Aβ, to discovering unknown conditions that increase risk for autism, every aspect of this research warrants time and resources. According to the researchers, those resources—additional funding through grant dollars and donor contributions—are crucial to moving the needle forward on their work. A high-risk, high-reward project that could impact the lives of countless people spanning the generational spectrum, Lahiri asserted that the palpable promise of the work his group is doing makes securing financial support for that research imperative.

“Going step by step to understanding the biochemistry and biomarkers-based diagnosis will be a rewarding experience,” Lahiri said. “Fortunately, the advantage we have is the researchers and environment here at IU School of Medicine where this research is possible. Someone has to look from ten thousand feet up to better understand the correlation between these disorders and we have done just that. We bring diverse ideas regarding Alzheimer’s disease and autism spectrum disorder which is, in turn, our strength.”

Learn more about the Departments of Psychiatry and Neurology at IU School of Medicine and how they’re both working toward effective treatments in autism spectrum disorder and Alzheimer’s disease.

To read more about the group’s work, check out this two-part story.