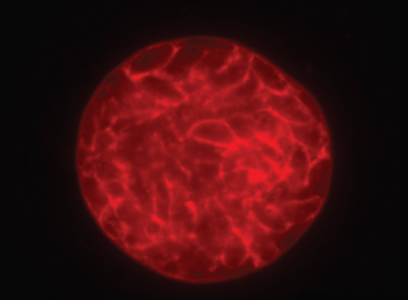 Photo of a Toxoplasma tissue cyst, which can contain hundreds of individual parasites. (Image by Imaan Benmerzouga)

Toxoplasma gondii (Toxo for short) is a single-cell parasite that has infected about 22 percent of Americans. How did so many people get infected and why do we need to pay special attention during the summer?

In terms of its abundance around the world, Toxo is commonly considered “the most successful parasite on Earth.” In addition to being present in many people, this parasite has been found in virtually every animal ever examined, even beluga whales. The reason why it gets around so well is because it has multiple routes of transmission. In other words, Toxo has more than one way to get into new host organisms.

The definitive host organism for Toxo is the cat. The cat is the only animal that supports the sexual stage of the parasite’s life cycle. Consequently, an infected cat will expel millions of highly infectious Toxo oocysts for 1 to 2 weeks. These oocysts can be accidentally ingested or even inhaled, releasing parasites into the body. Toxo oocysts can be found in kitty litter or other places where infected cats defecate, such as gardens, sandboxes, or yards. While infected cats only shed oocysts once in their life, the oocysts can survive in the environment for years.

With all those Toxo oocysts out there, it is easy to see why so many animals get infected with Toxo. But the parasite has yet another trick up its sleeve to get into even more host organisms. In infected animals, the parasite converts into latent tissue cysts that remain inside the organs and muscles. Wild game and many livestock animals, including pigs, lamb, and cattle, can become contaminated with these parasite tissue cysts. When these infected animals are eaten, the tissue cysts in the meat pass the infection into the predator. The tissue cysts can be destroyed by freezing the meat and/or cooking it to an internal temperature of 165 degrees Fahrenheit.

There is one more sinister way Toxo can transmit to a new host—from mother to child. If a woman becomes infected for the first time during pregnancy, Toxo can cross the placenta and cause miscarriage or congenital birth defects. It is particularly important that pregnant women follow safety precautions to avoid Toxo infection.

In most normal healthy individuals, infection with Toxo does not cause serious disease. However, it is a permanent infection that we cannot cure at present. If the immune system weakens, there is a chance the infection will reactivate due to the latent tissue cysts, which remain in the infected person for life. When the parasites in tissue cysts start growing again, they can cause life-threatening and irreversible damage to the brain, eyes, and heart. People who are HIV-positive or who have suppressed immune systems due to cancer chemotherapy or organ transplantation are most susceptible to reactivated toxoplasmosis.

So why the alarm at summertime? While Toxo can infect someone any time of the year, spring and summer include activities that put us at greater risk of infection. More people are outside where Toxo oocysts are prevalent. People start gardening and kids start playing in sandboxes. People sometimes eat fruits or veggies without washing them first, unaware they may have Toxo oocysts on them. Toxo oocysts can also be ingested if you drink contaminated water while camping or hiking.

In addition to oocysts, people also start grilling out, which puts them at risk of consuming Toxo tissue cysts if the meat isn’t cooked thoroughly. Your cat may also spend more time outdoors, which puts it at risk of picking up Toxo oocysts or ingesting tissue cysts in mice they catch. You can avoid infection with Toxo by taking simple precautions during your summer activities and throughout the rest of the year.

Summer activities can increase your chances of infection by other parasites, too. These include Cryptosporidium (the “swimming pool” parasite), Giardia (also known as “beaver fever” by hikers), and Babesia (transmitted by ticks). Since ticks and mosquitoes also transmit a number of other pathogens, it is very important to use insect repellent when outdoors.