Depriving Parasites of Their Shelter From The Storm 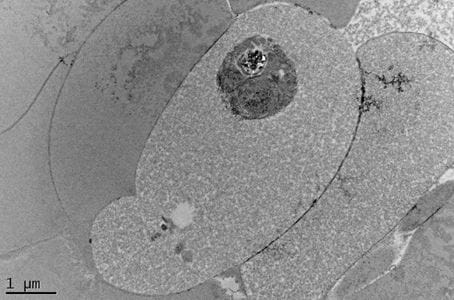 Here in the Midwest, we are well aware of the value that storm shelters provide during threatening weather. This survival strategy is not lost on parasites that invade our bodies:  they also seek shelter after detecting a threat. When our immune system challenges them, they cope with this stress by entering a latent stage, which provides shelter from the storm. We’ve recently discovered that parasites react the same way when we try to eliminate them with antiparasitic drugs.

My lab primarily studies a single-celled parasite called Toxoplasma gondii, which has infected around one-third of the world’s population because it has many ways to get into our bodies. We can catch this parasite from mishandling kitty litter or by consuming contaminated food or water. While Toxoplasma typically causes problems in immune compromised patients, the parasite never leaves the body because it is able to transform into a latent stage. The latent stage provides the parasite shelter from drugs and immunity, allowing it to strike again in the future.

People are more familiar with Toxoplasma’s cousin, Plasmodium, which causes malaria. Malaria is a major global health problem that is hard to contend with due to the parasite’s ability to thwart drug treatments. The widely used antimalarial drug, artemisinin, which has its roots in Chinese herbal medicine, is very effective against malaria parasites. However, many patients suffer treatment failure with artemisinin because the parasites appear to be capable of entering a latent phase that allows them to ride out the presence of the drug. When patients finish their artemisinin, these latent parasites reactivate and cause a relapse of the infection.

If we only knew how these parasites transformed into their latent stage, perhaps we could devise new therapeutic strategies that would knock them out for good.

Back in 2004, Ron Wek (a Professor in the Department of Biochemistry and Molecular Biology at IUSM) and I started a collaboration to determine if Toxoplasma parasites use a stress response pathway involving the phosphorylation of a protein called eukaryotic initiation factor-2 (eIF2). eIF2 is critical in starting the production of cellular proteins. When a cell is stressed, eIF2 is chemically modified (phosphorylated) by a special group of proteins called eIF2 kinases. When eIF2 is phosphorylated, cells stop making their normal set of proteins and switch over to making proteins that allow them to weather the storm. Our work has shown that stressed out parasites phosphorylate eIF2, allowing them to make stress-response proteins. Importantly, we’ve also demonstrated that eIF2 remains phosphorylated in the latent forms of the parasites.

We’ve enjoyed a longstanding collaboration with Min Zhang, formerly a postdoctoral fellow in the laboratory of Victor Nussenzweig at New York University School of Medicine (now a Research Assistant Professor at IUSM), to investigate the effects of eIF2 phosphorylation in malaria parasites. Min’s latest research explored the idea that treatment failures with artemisinin are the result of eIF2 phosphorylation. The findings, published in Cell Host & Microbe, show that an eIF2 kinase in malaria parasites called PK4 phosphorylates eIF2 in response to artemisinin. Even more exciting, blocking PK4 with a kinase inhibitor restored artemisinin’s ability to kill the malaria parasites. Forty percent of mice infected with malaria and given artemisinin experience a relapse in the infection, but none of the infected mice receiving artemisinin plus the PK4 inhibitor experienced a relapse.

Our findings suggest that eIF2 phosphorylation is a protective mechanism that parasites use to survive the storm of drug treatment. If we deprive them of this shelter, the parasites have no safe place left to hide and remain vulnerable.

Bill Sullivan is Showalter Professor in the Departments of Pharmacology & Toxicology and Microbiology & Immunology at the Indiana University School of Medicine. His research is centered on infectious disease and anti-infective agents.