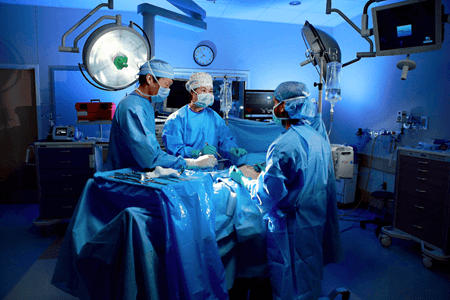 The cost of health care is on the minds of most Americans. It is often hard, though, to determine how to decrease health care spending without affecting the access to or quality of the care delivered.

Many believe, however, that there is some “fat” in the system that could be trimmed. This wasteful care might cost more, but really doesn’t matter. If we can identify this waste, which provides little value, then we could cut it—and not adversely affect other aspects of health care.

In a recent study published in Surgical Endoscopy, surgeons in the IU School of Medicine Department of Surgery tried to identify areas of spending that make no difference in the operating room. They specifically looked at laparoscopic cholecystectomy, which is considered the standard of care for treatment of diseases of the biliary tract or gall bladder. Laparoscopic surgery involves the use of special cameras and instruments that allow surgeons to operate through small incisions. It’s less invasive, and it allows for quicker recovery times, but the equipment can be expensive. In this study, the researchers looked at the variations between surgeons with respect to their equipment and operating room costs for performing this elective procedure.

All procedures performed at IU Health University Hospital in 2013 were included in the analysis. Data such as patient demographics, diagnosis, operative time, equipment used and resident participation were extracted for use in analyses. In order to make sure that the procedures would be as similar as possible, cases of acute cholecystitis and those that were attacked to additional procedures were excluded. The main outcomes of interest were the total supply costs and the disposable costs for key components of the laparoscopic procedure.

More than 270 cases were included in the analysis, performed by three surgeons. The patients seen and the cases themselves were similar between doctors. The time of the operations differed quite a bit, though, averaging from 53 minutes to 98 minutes. Resident participation affected the time of the procedure. Interestingly, the surgeons who took the longest also cost the least.

More cost-efficient techniques involved the use of plastic locking clips and hook electrocautery.

It’s important to understand that there were no real appreciable differences in outcomes or in morbidity/mortality with these procedures and surgeons. Given that, the differences in cost are somewhat hard to justify. If the most expensive surgeon had used the technique and equipment of the cheapest surgeon, that alone would have reduced the supply cost alone for one procedure in 2013 from $251,000 to $112,000. As the authors argue in the conclusion:

“[D]irect variable supply costs can compose a large portion of the total operative costs for outpatient, elective LC. Individual surgeons so as to minimize waste should be aware and track used and unused items during each case. Alterations in technique and supplies as well as attempts to decrease operating room time may provide methods to decrease total operative cost, yet not at the expense of patient safety. Surgeon engagement by operating room administrators in making decisions that lead to changes in practice that reduce cost in terms of excessive variable supplies is imperative, while maintaining input for an appropriate amount of variation that provides the safest and highest quality care to patients.”