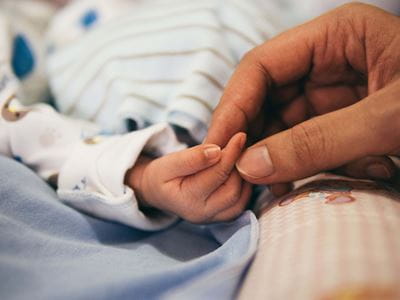 Hypoxic-ischemic encephalopathy (HIE) is an injury to the brain that occurs when it is deprived of oxygen. Unfortunately, this can occur during delivery of a baby, and it can lead to epilepsy, developmental delay, and cognitive impairment. Infants who are born near or at full term who show signs of having hypoxic-ichemic encephalopathy are sometimes treated with cooling.

A number of studies have shown that cooling newborns to 33.5 degrees Celsius (92.3 degrees Fahrenheit) for 72 hours—starting within six hours after birth—protects their brains. We’ve been doing that for more than a decade. But animal studies have suggested that cooling further—to 32.0 degrees Celsius (89.6 degrees Fahrenheit)—and for longer periods of time, might be even better. To know for sure, though, we’d need a large study, which is difficult to do in one institution.

Researchers at Indiana University School of Medicine, therefore, joined a number of other institutions in performing a larger randomized controlled clinical trial of newborns with hypoxic-ischemic encephalopathy to see what treatment is optimal. To be eligible for the study, infants needed to be at least 36 weeks gestation and have signs of HIE. They were all randomized to one of four groups:

The outcomes of interest for the study, published July 4 in the Journal of the American Medical Association, were whether infants died, or whether they developed moderate or severe disabilities by 18 to 22 months of life. Disabilities could be cognitive or motor related, and could include blindness or hearing loss.

However, the study was stopped early because of concerns with respect to mortality, not disability. As the data safety monitoring board reviewed the ongoing study, they found that there was a higher mortality rate in infants who were cooled for a longer period of time. Those who were cooled to the lowest temperatures and for 120 hours had the highest mortality rates. They also had the lowest disability rates. It should be stressed, however, that because the study was closed early, this should be interpreted with caution.

The bottom line is that it appears that our current practice of cooling babies near term with hypoxic-ischemic encephalopathy to 33.5 degrees Celsius for 72 hours is the way to go.