Addressing the opioid crisis: Wearable overdose detection and treatment patch may save lives 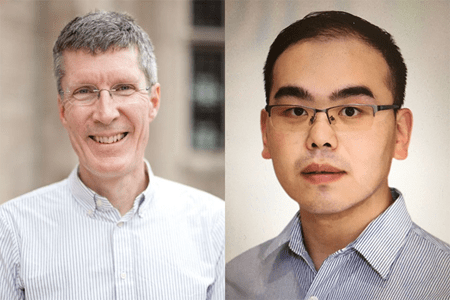 It happened unexpectedly at noon on an average Wednesday in late May. Indiana University School of Medicine student Kaya Mernitz saved a life.

Looking out at the empty lot across the street from the home she shares with two other medical students on Indianapolis’ near east side, she noticed a woman who appeared to be unconscious. As Mernitz raced over to assess the situation, she quickly recognized the symptoms of an opioid overdose—shallow breathing, pinpoint pupils and blue lips. 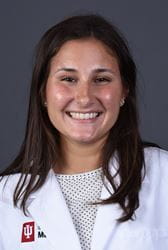 She called 911 and then handed off the phone to her roommates as she began performing CPR. Soon medics arrived and administered naloxone to rapidly reverse the effects of overdose. About 10 minutes later, the woman was responsive enough to walk to the ambulance.

“I now carry naloxone at all times in case it ever happens again!” Mernitz said.

New tools in the fight against opioid overdoses

Opioid misuse is at a crisis level in Indiana and around the nation. EMS units throughout the state collectively reported 20,571 events where naloxone was administered in 2021. Those treated were the lucky ones.

More than 100,000 Americans lost their lives to drug overdose last year with about 75 percent of those deaths attributed to opioids, according to data from the National Center for Health Statistics. Indiana mirrors those grim statistics with about 2,800 Hoosiers dying from drug overdose within the last 12 months; opioid incidents soared dramatically during the COVID-19 pandemic.

Naloxone is lifesaving when administered in time. The Indiana Department of Health has implemented a distribution program to make the drug available to local health departments, many of which have provided free training within their communities, allowing citizens to carry and administer nasal naloxone.

Eskenazi Health recently installed a naloxone vending machine at its West 38th Street medical center, along with 10 NaloxBox units on the exterior of Eskenazi Health Center buildings, providing 24/7 access to opioid rescue kits in the event of an overdose. While recognizing there is no single solution to ending the opioid epidemic, Indiana Gov. Eric Holcomb called NaloxBoxes “a practical tool to prevent overdoses and save lives.”

However, administering naloxone in time depends on a good Samaritan like Mernitz to notice signs of overdose and take action before it’s too late.

What if an overdose could be immediately reversed without bystander assistance?

Thousands of lives could be saved by a wearable patch device being developed by two Indiana University researchers—neuroscientist and anesthesiologist Ken Mackie, MD, and bioengineer Feng Guo, PhD.

They recently received a $3.8 million grant from the National Institute on Drug Abuse to develop a wearable device that would detect and treat an opioid overdose in real time. The patch would relay physiological parameters—breathing pattern, blood oxygen level and heart rate—to a machine-learning based controller on the wearer’s smartphone. If an overdose event is detected, the patch would immediately administer naloxone and notify emergency medical services. 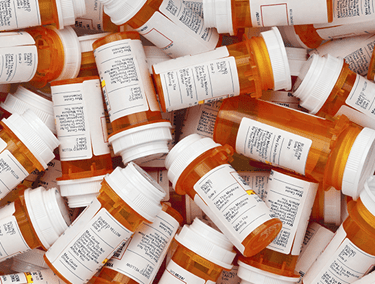 “This is a device that could potentially save lives—that’s the reason for doing it,” said Mackie, an IU distinguished professor, adjunct professor of anesthesia at IU School of Medicine and a Jack and Linda Gill Chair of the Gill Center for Biomolecular Science.

The device would initially be used by people who have been legally prescribed therapeutic opioids for pain management. Although under a physician’s care, these patients are often at risk for accidental overdose, especially if their dosage has recently changed, Mackie said.

“If someone with cancer who is receiving a relatively high dose of opioids experiences breakthrough pain and takes a little too much fentanyl and experiences respiratory depression, this device can deliver sufficient naloxone to increase respirations,” he explained. “It allows for personalized dosing.” 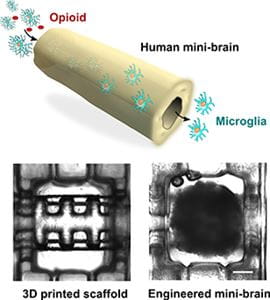 He and Guo are longtime collaborators and have worked together in the past to engineer human mini-brains for use as research models to study a drug’s effect on the brain. When Guo discussed his work on the development of automated drug delivery patches, Mackie immediately thought of its potential use to combat opioid overdose.

Based on his research in cannabis, Mackie had been asked to serve on an advisory council for the National Institute on Drug Abuse. Joining the council in 2016 and serving through 2021, he was acutely aware of the opioid crisis as overdose deaths skyrocketed, intensifying during the COVID-19 pandemic.

“Feng was describing the patch, and I was thinking about opioid overdoses,” Mackie said. “It was like, wow, it would be really good to combine the two. We did preliminary work in mice at IU Bloomington as a proof of concept, and then we had to find funding to further push it along.”

As part of the NIH-funded project Mackie and Guo are leading, Indiana University researchers are working with collaborators at the University of Washington and Penn State University. The long-range vision is to test the device in humans within three years, and if all goes well, find a partner for commercialization, Mackie said.

Like Holcomb, Mackie recognizes that solving the opioid crisis will take a multi-faceted approach.

“Substance abuse disorder has to be approached from a holistic view,” he said. “Preventing opioid overdose can be part of the solution, but it doesn’t solve the problem. In society, we tend to put a lot of emphasis on the high-tech solutions to treat a disorder, but there’s a lot to be said for looking at why people develop those problems in the first place.”

At the same time, the opioid overdose patch would be a valuable, lifesaving tool.

“People die from opioid overdoses every day, and these deaths are often preventable,” he said.

Know the signs of overdose:

To learn more about how to obtain a free naloxone rescue kit, visit the Indiana Department of Health website for overdose death prevention.