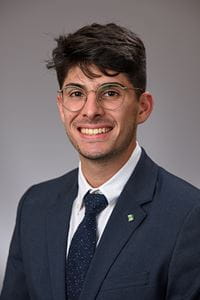 Alejandro Tapia is a first-year graduate student at Indiana University School of Medicine as well as one of the first members of the Medical Physician Engineers, Scientists, and Clinicians Preparatory Program (MPESC-Prep).

Tapia credits the MPESC program for his decision to be a researcher. The program is designed to establish a multifaced training program to ensure talented, diverse high school and college students are exposed to opportunities for STEM professional development and mentorship to pursue formal education and training in the prevention and treatment of cardiovascular, pulmonary, and hematologic conditions. The MPESC-Prep program was created by Wade Clapp, MD, Chair of the Department of Pediatrics.

“I felt that it was important to provide diverse students with sustained and longitudinal mentoring relationships with practicing physicians and researchers early in their career,” said Clapp.

High school seniors are being recruited by MPESC to the participating colleges and universities. After attending informational sessions provided by Clapp’s office, students apply and interview for the program. Students accepted into MPESC begin the year-round program in the first month of their college freshman year. The summer after their freshman year students are then students are placed with faculty mentors in laboratories, primarily at the Herman B Wells Center for Pediatric Research, where they often return to year after year, gaining research experience and developing themselves professionally. 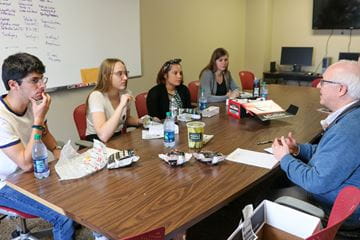 Clapp wants undergraduate students to see firsthand what it’s like in the medical field from experienced mentors. Students can gain years of experience in research, which then will make them an outstanding candidate when they apply for medical school, graduate school, or combined degree programs. Clapp originally created this mentorship program with Hanover College. MPESC has now expanded beyond Hanover to include the Weldon College of Biomedical Engineering at Purdue University, and the Honors College at the Indiana University-Purdue University at Indianapolis (IUPUI).

“Mentorship is something that means a lot to me,” said Clapp. “I love mentoring across all levels of someone’s career.” The time Tapia spent with the MPESC-Prep Program with Dr. Roland Herzog from the Wells Center was beneficial, even with most of it being spent online due to the pandemic. He was able to learn a lot from presentations, mentors, and instructors throughout the program. Tapia was surprised at how he had graduated high school with the mindset that he wanted to be a physician; then once he got into the lab, he realized he could help people through his love for science as a research professional.

“Being in the lab ultimately helped me solidify what I wanted to do as a career,” said Tapia.

Tapia is a Hanover College science graduate who spent many hours perfecting his application for graduate school and making sure his resume was as robust as possible. Even with the focus being on grad school, he was very involved in campus life. Tapia participated in several committees—Latino student union, college athletics, as well as holding different positions in a fraternity.

“Being able to have several achievements in all of my collegiate arenas helped me become a more outstanding candidate that has more to contribute to myself and others,” said Tapia. “I am thankful for Dr. Herzog’s mentorship through the MPESC program, and I look forward to joining his lab as an IU School of Medicine graduate student”.

Sydney Gendron is a senior at IUPUI, Indianapolis. She is majoring in journalism and minoring in graphic design and will graduate this coming May. She loves photography, writing, and hiking.