(The images that accompany this blog were provided courtesy of Partner Liberia.)

In an Indiana University School of Medicine laboratory, Michael D. Davis, RRT, PhD, is growing human airways. Expanded from patient swab samples, these pieces of airways replicate the environment of some of the most burdensome lung diseases, including cystic fibrosis, pneumonia, severe asthma and coronavirus.

As a respiratory therapist and clinician scientist at the Herman B Wells Center for Pediatric Research, Davis plays a significant role in ongoing studies related to pulmonary medicine. His work provides ideal models for testing improved and personalized therapies.

But that’s just one of the ways that Davis is helping to alleviate the burden of respiratory disease in Indiana and beyond.

Over 5,000 miles away from his Indianapolis office, Davis has another critical role. He is assisting the Liberian government with its COVID-19 response plan. 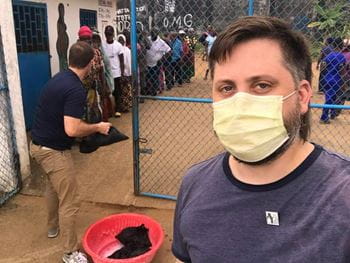 This isn’t the first time Davis has answered the call to help communities in West Africa. He’s been working there a few months a year since 2011, when he was invited to assist with opening a clinic at a local school.

“I really fell in love with Liberia,” said Davis. “The people are amazing, and respiratory disease is a leading cause of death there—and that’s what I do!”

So he went back the next year, putting his own education on a brief hold to volunteer at Liberian hospitals.

At the time, there was only one respiratory therapist in Liberia and zero academic programs to train more. With respiratory failure threatening lives in Liberian communities, the people were in desperate need of a change.

It was around that time when Davis was approached by Liberia’s only respiratory therapist, Joseph Moore. Moore asked Davis if he would help establish a school that could provide the pipeline of respiratory specialists the country needed. In 2012, they opened the Liberia Respiratory Care Institute, the first of its kind on the entire continent of Africa.

While obtaining his doctorate at Virginia Commonwealth University, Davis continued to work closely with Moore and the Liberian government to develop a board examination and national licensure for respiratory therapy professionals in time for the school’s first graduating class.

“Now,” said Davis matter-of-factly, “there are respiratory therapists in Liberia."

And as SARS-CoV-2 made its way around the globe, the world would need them more than ever.

Of all the trips he’s taken to West Africa in the last decade, Davis' most recent travels may go down as the most memorable.

“I had just returned home, and then I received a surprising phone call. I got a call from the Minister of Health of Liberia,” Davis said. “She asked if I would help manage the pandemic with her and serve as a consultant.”

Davis promptly returned to West Africa, working alongside health officials to assess the COVID-19 crisis and assist with the acquisition and distribution of critical resources. This included securing funding from major organizations, including US Agency for International Development, the Centers for Disease Control and Prevention, World Health Organization, and the Clinton Access Initiative. These resources will fund medical training and supplies that will continue to support COVID-19 patients in Liberia in the months ahead.

“When I got there, it was really bad,” said Davis. “Thanks to a bunch of international partners, we got oxygen supplies and that helped us get the death rate down. And then we started working with the Case Management Unit to update the patient care protocols to use evidence-based treatments adapted to the Liberia environment.”

When he returned to Indiana in August, the last patient on oxygen at the National COVID-19 Treatment Center had just been successfully weaned off. 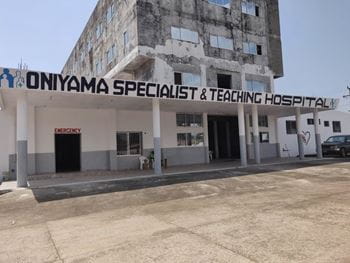 Davis is also a co-founder of a nonprofit organization called Partner Liberia, established in 2014, that supports the respiratory college and the recently opened teaching and care facility, the Oniyama Health Center.

Together with others, Partner Liberia helped revive the hospital in 2019 after it sat abandoned for some time. Now, in addition to providing a clinical learning environment for the respiratory school’s trainees, it functions as a treatment center and referral laboratory for respiratory conditions and testing services.

Unsurprisingly, Davis’ contributions have earned high regard among his colleagues in the global respiratory care community. Recently, he was honored with the 2021 Toshihiko Koga, MD International Medal by the International Council for Respiratory Care (ICRC). The award is the highest honor bestowed by the ICRC, given annually in recognition of the awardee’s excellence in promoting the globalization of quality respiratory care.

“Dr. Davis’ work in Liberia that has resulted in the advancement of the art and science of respiratory care education, research, and promotion of quality respiratory care among practitioners with differing credentials in their respected countries is well-recognized and respected by his peers,” said ICRC President Daniel Rowley. “He is most-deserving of this award.”

Still, Davis humbly insists that he is little more than a cog in the wheel toward improved health outcomes for people in West Africa and around the world.

“This work is bigger than me, and I am here to serve,” said Davis, reciting his professional mantra.

Ultimately, he said, it’s about helping a community in need create a healthy and sustainable system of its own. And they’re well on their way, with the school and health care center fully staffed by local professionals.

“Basically, if it requires outsiders to go over there and make it work, it’s not sustainable,” said Davis.

But that won’t keep him from going back each year to do his part.