How in the World did Indiana University School of Medicine Faculty Travel from Fort Wayne to Indianapolis in 1908? 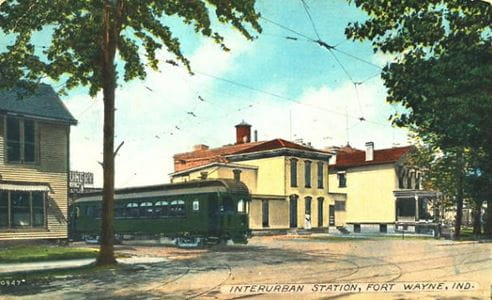 Most of us don’t have time to stop and think about how far medicine has traveled since Indiana University School of Medicine in Indianapolis began in 1908. But when you do, you realize that long before today’s telemedicine, telehealth services and community-based clinics, physicians did the traveling across the state, but how?

Everything we read about Dr. Drayer told us that he lived in Fort Wayne, Indiana. Dr. Drayer was appointed Fort Wayne’s first health officer in 1895 where he founded the city’s first bacteriological laboratory. We went back and checked. Dr. Drayer most certainly did live in Fort Wayne. In 1908, the Fort Wayne city directory showed that Dr. Drayer’s general practice office and home address was 301 West Berry Street with office hours on Mondays, Wednesdays and Saturdays. One might surmise that Dr. Drayer then was in Indianapolis on Tuesdays, Thursdays and Fridays to carry out faculty responsibilities with IU School of Medicine. But how in the world did he get from Fort Wayne to Indianapolis?

It was 1908.  Automobiles were still in their infancy, not only in Indiana but nationwide. Paved highways were not to come until the Lincoln Highway blazed a trail across many states in 1913. Interstates were not even on the radar till mid-century. The Wright Brothers flew at Kitty Hawk in 1903, but the nation’s first commercial air flight did not happen until 1914.

Indianapolis once was a Steam Rail Road and Interurban Center. A diagram from Polk’s 1908 Indianapolis City Directory shows that at that time, 43 independent lines entered Indianapolis, 18 Steam and 25 Interurban. So, Dr. Drayer had one of two options:  travel from Fort Wayne to Indianapolis by steam-powered passenger train or by interurban. Interurban, you say? Over 100 years ago, interurbans were intercity electric railways popular in the Hoosier State. The electric interurbans, tethered to power lines running above their tracks, ran more frequently during the day than passenger trains.

Interurban lines connected Indiana’s small towns with most of Indiana’s big cities and the cities with each other. Lines extended from Indianapolis to Fort Wayne, Louisville, Lafayette, Peru, Terre Haute and Richmond (and six other routes). These interurbans then connected with other lines to reach to Chicago, Toledo, Columbus and beyond. Today, Northern Indiana’s South Shore Line from South Bend to Chicago is the only light rail operation left in Indiana and one of only a few left in the country.

Interurbans remained popular as an inexpensive model of travel across the Hoosier state but disappeared from Indiana’s landscape, most making their last runs in the early 1940s.

Another early Indiana University School of Medicine faculty member, Louis Segar, MD, also traveled extensively across the state. Beaty Segar, widow of Dr. Segar, recalled her husband’s beginning days of his practice as Indiana’s first full-time pediatrician. “We rode all over the state,” she recalled. As Dr. Segar was the only doctor in Indiana who specialized in pediatrics at that time, he was summoned to cities across the state, including Bedford, Martinsville and Anderson. Both Dr. Drayer and Dr. Segar likely caught the interurban to reach their destinations in the early years of IU School of Medicine in Indianapolis, long before the days of telemedicine, telehealth services and community-based clinics and long before planes and automobiles.

Ashley Dummer is a Communications Specialist in the Department of Pediatrics. She has worked in Pediatrics since graduating with her degree from Indiana University.