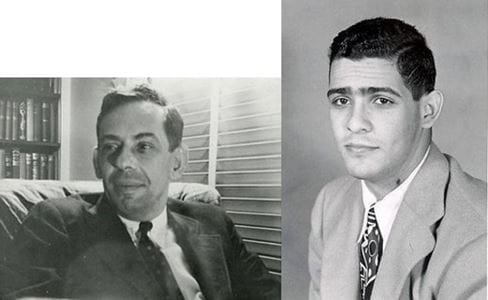 The remarkable history of the Indiana University School of Medicine family includes many stories of wonder, including the story of father and son physicians, Louis Harold Segar, M.D. and William Elias Segar, M.D., both who made pioneering contributions to the practice of medicine.

Louis H. (L.H.) Segar, M.D. was born on April 4, 1890.  He graduated in the 1912 class of the Indiana University School of Medicine after earning his A.B. degree from Indiana University in 1910. In 1915, he was chosen from a large field of applicants for an intern position at the Children’s Hospital in Boston where he traded rotations with other young doctors and took on extra pediatric assignments to get additional experience.  He returned to Indiana in 1916 to begin exclusive full-time practice of pediatrics as one of Indiana’s first pediatricians; in fact, he frequently is recognized as the state’s first full-time pediatrician.  Dr. L.H. Segar’s wife, Beaty, later recalled the first days of his practice:  “. . . he opened an office and sat there day after day.  Nobody came in.  At one point he told his father he was going to quit medicine.  Then, finally, he got a call to consult on a case of scarlet fever.”  He was good, word spread, and his long successful 40 year practice of pediatrics was launched.  As he was the only doctor in Indiana at the time to specialize in pediatrics, he was frequently summoned for consultations across the state.  His wife Beaty described him as “ . . . a 24-hour a day doctor and he carried his black satchel bag with him everywhere.”

Dr. L.H. Segar also was appointed as an Assistant in Pediatrics in 1916 by the Indiana University School of Medicine.  In 1917, L.H. Segar was among 28 other medical school physicians granted leaves of absence for military service during WWI by the university; he served as an Assistant surgeon in the United States Navy.  As one of the first Indiana doctors to specialize in diseases of children, he taught pediatrics at the IU School of Medicine for 30 years and contributed presentations and publications to knowledge of infant care.  He rose through the ranks (named Associate in Pediatrics, 1926; Associate Professor of Pediatrics, 1930; and Clinical Professor of Pediatrics, 1932) and was among faculty named to staff the newly created Department of Medical Economics and Postgraduate Instruction for the School of Medicine in 1939.  He retired as Professor Emeritus in Pediatrics in 1954 and died on December 28, 1963.

His son, Dr. William E. (W.E.) Segar, was born on December 16, 1923.  He earned a B.S. from Indiana University in 1944 and graduated from the Indiana University School of Medicine in 1947. Following his first intern year, he finished his residency at the University of Illinois where he spent time in laboratory settings doing research in nephrology.  He had planned to go into practice with his father, but instead pursued the opportunity to complete a fellowship at Yale University to study body fluid physiology and therapy.

While in the army during the Korean War, Dr. W.E. Segar worked at dialysis centers on the east coast and learned the process of artificial kidney dialysis, a treatment yet to be tested in pediatrics at that time.  After the Korean War, he returned to Indiana University in 1955, worked with colleagues in the Department of Pediatrics who had similar training in fluid therapy, and began publishing papers evaluating treatments they’d previously studied in pediatric patients.  These publications, considered some of most important publications of the 2nd half of the century, were monumental in parenteral (IV) fluid therapy becoming standard treatment for pediatric renal conditions.  The equation for the calculation of maintenance fluid therapy was described by Malcom Holliday, M.D. and Dr. W.E. Segar of the Indiana University School of Medicine’s Department of Pediatrics in 1957 and is still the standard one listed in Pediatric textbooks and is still in use today.

Dr. W.E. Segar began his teaching career at the Indiana University School of Medicine, served on the curriculum committee and was one of 3 physicians to spearhead the idea of recruiting clinicians to teach the basic science course of the first 2 years of medical school instead of researchers.  He moved to Minnesota in 1967, began work for Mayo Clinic, and moved again to University of Wisconsin Department of Pediatrics, which led to his chairmanship from 1974 to 1984.

The Midwest Society for Pediatric Research awarded him the Founders Award in 1987 for outstanding service to pediatric research and in 2012, the Society created an award in his name, the William E. Segar Award.  Dr. W.E. Segar was also recognized in 2014 with the Indiana University Distinguished Alumni Award at the Indiana University School of Medicine’s 67th Annual Strawberry Shortcake Luncheon.  He passed away on February 1, 2021.