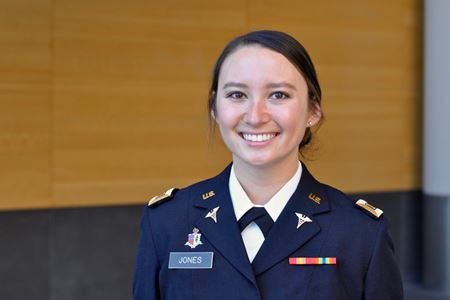 Angel Jones didn’t always know she wanted to be a doctor or that she would serve her country in the U.S. Army, but she knew she wanted to help people. Two family tragedies helped shape the resilient, courageous and determined young woman she has become. Her mother died after battling stomach cancer when Jones was just 5 years old. Then, at age 19, her father suffered a heart attack and stroke, leaving Jones to be his primary caregiver.

Her early exposure to the health care field has informed her career path. Now Jones is poised to graduate from Indiana University School of Medicine and start her residency in emergency medicine at Carl R. Darnall Army Medical Center in Fort Hood, Texas, as part of the Armed Forces Health Professions Scholarship Program (HPSP).

Darnall was her top pick in the military match, which took place on December 11, 2019, about three months earlier than the National Resident Matching Program (NRMP) Match Day event for fourth year medical students around the country. Of more than 350 IU School of Medicine students participating in a residency match this school year, just 10 of them will be heading to a military hospital. Jones is among that select group.

At the time of her father’s stroke, she was a freshman at Bethel University in northern Indiana, playing on the softball team. Her professors and coaches were understanding of her frequent need to travel to medical facilities in Fort Wayne to visit her father and discuss his care with his medical team.

“I have loved the physicians that were kind and compassionate, who would take time to explain things to my dad and me about how to help him,” said Jones, hinting at the inspiration for her chosen career.

Because of her dad’s needs after his stroke, she became his primary caregiver. Many people would have put a pause on pursuing their own academic endeavors, but not Jones. She enlisted help from her fiancé, Seth (now her husband), and from family friends. She knew her dad would not want her to give up on her dreams, and she was more motivated than ever to go into a profession where she could help people through medical crises.

“She is very resilient, and she worked very hard to earn her way into medical school despite all of the obstacles in her path,” said Gin Moore, MSEd, LMHC, LSW, medical education lead advisor and relationship effectiveness coordinator at IU School of Medicine-Fort Wayne.

Being able to attend a top-notch medical school at a campus close to home was critical for Jones, who grew up in Pleasant Lake, Indiana, which is just 45 minutes from IU School of Medicine’s Fort Wayne campus, one of nine campuses across the state. When Jones starts her residency at Darnall, her father will move to Texas with her family.

Choosing to participate in the military scholarship program comes with both benefits and commitments. The HPSP provides a $20,000 signing bonus, full tuition, books and fees, and a monthly living stipend. While in residency, medical students are on active duty with the military. For each year of benefits, students owe one year of military service.

“They’re not just getting their college paid for; they’re putting their lives on the line to serve the country as military doctors,” explained Kristen Heath, MS, IU School of Medicine lead advisor and statewide wellness coordinator for Medical Student Education, who serves all military match students. “They have extra steps to complete like basic training and meeting physical standards. There are challenges to doing this program that the other medical students don’t face.”

For Jones, joining the Army made sense: “I got into medicine in the first place because I wanted to help people, so what better people to help than the people who are sacrificing and risking their lives and limbs for our freedom?”

Basic training was the first time the mild-mannered and slight-of-stature Jones had ever fired a gun. Those who know Jones, however, know her life experiences have made her “kind and compassionate on the outside but tough on the inside,” she said.

The frequency of deployment for military doctors depends on their specialty and the needs of the nation. Military doctors also may be deployed to provide aid after natural disasters. Although Army doctors specializing in emergency medicine are among the most frequently deployed, Jones still chose this demanding field because she enjoys the challenge of treating a diversity of patients, illnesses and injuries. 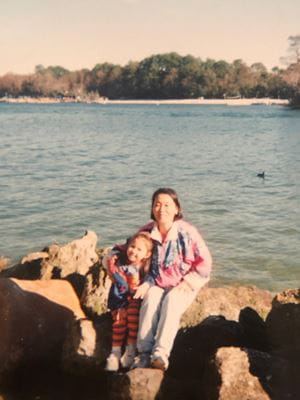 “I like being the first face people see when they enter the hospital,” she added.

Jones knows from firsthand experience how meaningful a friendly face can be when a family is experiencing a medical crisis.

“I am driven by the passion of wanting to take care of people like my mom and my dad,” Jones said.

In addition to joining the Armed Forces, Jones considered other paths, including serving as a missionary doctor overseas. But she found the military scholarship program to be the best way for her to gain medical training and experience from a nationally ranked school while continuing to take care of her dad.

“I am really honored to be part of IU School of Medicine and also the Army,” Jones said. “My life experiences have been so much greater than I imagined they could be as a kid.”