Five things to know about Paul Wallach, the new EAD for education 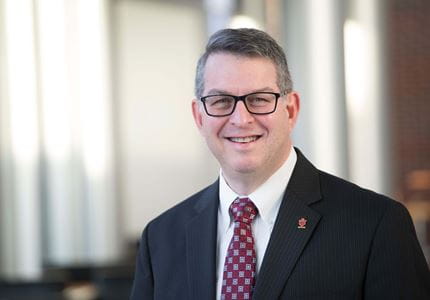 Paul M. Wallach, MD, officially began his new role this month as executive associate dean for educational affairs and institutional improvement. He comes to Indiana from the Medical College of Georgia at Augusta University, where he was vice dean for academic affairs.

His vision is to help IU School of Medicine become one of the nation’s top institutions for medical education. Focusing on improving and enhancing the student experience is one way he plans to achieve this goal.

Dr. Wallach and his wife are still unpacking their new home in Carmel, but once all the dishes are put away and the boxes are carted off, expect them to begin issuing invitations to dinner. In Georgia, the couple hosted students in their home about once a month. The invite list included class officers, members of various student organizations and students selected at random from each class.

But why stop at dinner? Dr. Wallach said he’ll also occasionally send an email offering to take the first five students who swing by his office  to lunch. He views these casual encounters as one of the best ways to find out what’s on students’ minds. Plus, what med student can’t use a free meal?

Dr. Wallach has an office in Fairbanks Hall, the school’s administrative building on the canal, but it’s a bit far away from students for his liking. In Georgia, Dr. Wallach’s office was in the medical education building, giving him the opportunity to bump into students and for people to pop by when they wanted to talk. Dr. Wallach is currently looking for space for an office on the main campus so he has a presence in the heart of the action. So don’t be surprised if you even find him sitting next to you before class some time…

Through conversations with students and alumni at a prior institution, Dr. Wallach learned that students perceived the school as having a “culture of no.” For example, one student had been denied the opportunity to go to his longtime nanny’s funeral, and another student was told traveling to his best friend’s wedding would result in an unexcused absence.

“I opened the rule book and the rules were written in a draconian way,” Dr. Wallach said. “These are our junior colleagues. How we treat them is how they are going to treat others. We rewrote the rules.” Dr. Wallach said he personally visited classrooms to apologize for a history of treating students without enough empathy and gave out his cell number so students could contact him directly.

Dr. Wallach knows what it’s like to be at a multi-campus medical school; the Medical College of Georgia has five campuses. He now has visited all eight of IU School of Medicine’s regional campuses between now and the summer to learn about the culture, opportunities and challenges students face at each location. But that’s just the start. Once a quarter, he will bring all the regional campus directors together on a different campus, ensuring school leaders continue to travel the state. For Dr. Wallach, it’s all about ensuring students and faculty at the regional campuses are equal partners.
Update: Read about Dr. Wallach’s recent adventures across the state!

In Georgia, he implemented a highly popular educational program in point-of-care ultrasound. Ultrasound technology was integrated throughout the entire curriculum, from anatomy and physiology classes to clinical rotations, where a student might learn to use a hand-held ultrasound to screen for an abdominal aortic aneurysm. The result was that learners became more adept at using the non-invasive technology as part of routine care, and better prepared for a future when hand-held ultrasounds may one day be as ubiquitous as today’s stethoscope.

Dr. Wallach is not coming to IU with a list of specific changes he plans to make. Rather, he encourages students, faculty and other constituents to propose similarly bold ideas that are tailored to IU School of Medicine and its culture.