Why are allergies on the rise? IU researchers are trying to find out. 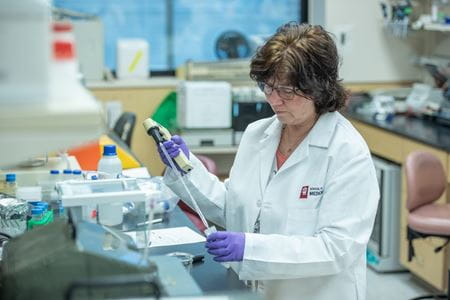 If you have a sneaking suspicion that allergies are becoming more common, you’re right. Allergic diseases such as asthma and food allergy have been on the rise for the last several decades, with the most severe reactions threatening the lives of children and adults around the world each day. But why are we seeing this increase? And how can we prevent the development of allergic disease for future generations?

Questions like these are on the minds of Pulmonary Inflammation, Asthma and Allergic Disease investigators from the Herman B Wells Center for Pediatric Research. The group’s newest member, Joan Cook-Mills, PhD, has spent decades working to identify genetic and environmental factors that lead to allergic disease. And she’s made some remarkable discoveries.

Could our diet play a role in the allergy uptick?

It turns out that gamma-tocopherol, the vitamin E isoform that reduces lung function, is present in common cooking oils used in the United States, such as soybean oil and corn oil. While it does not necessarily induce an allergic reaction, gamma-tocopherol may act as a pro-inflammatory mediator that increases severity of the reaction.

Could a baby wipe contribute to the development of food allergy?

Scientific researchers have long used sulfate-based soaps to enhance skin absorption in models. With this in mind, Cook-Mills hypothesized that the sulfate compounds used in baby wipes increase sensitization in infants to the environmental factors that contribute to the development of food allergy.

Since baby wipes are used regularly during infancy—and the sulfates are not washed off of the skin—Cook-Mills used the sulfates to test her hypothesis in the lab. Using soap on neonatal models with common genetic deficiencies linked to allergies, Cook-Mills exposed the models to very low doses of food allergens and common household allergens.

During this study, she found that food allergy can develop very early in life with as few as four genetic and environmental factors: genetic mutation, presence of soap on the skin (as with baby wipes), skin exposure to food, and exposure to environmental allergens commonly found in homes.

Baby wipes do not cause an allergy, but this novel discovery sheds some light on how the evolution of everyday life may have contributed to the increase of early development of allergic disease in the last several decades.

Cook-Mills also found that animal models with allergic mothers needed fewer exposures to develop disease compared to models without allergic mothers. Among other studies, she is now working to determine which maternal factors contribute to this disease development.

In collaboration with clinicians around the country, Cook-Mills is applying her findings to further understand the underlying mechanisms of disease. Her ultimate goal is to develop novel therapies to treat people who suffer from allergic disease now and in the future.

“We know that allergies have increased in prevalence,” Cook-Mills said. “As investigators, we have two pressing questions: can we control the allergic responses that threaten people who have established allergies? And can we block the development of allergy early in life for our children and our children’s children?”