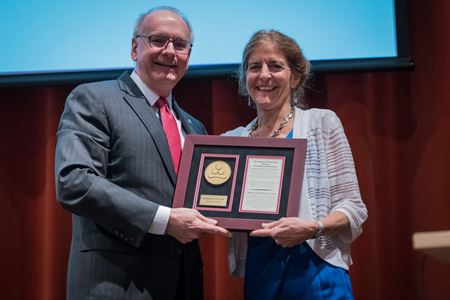 IU School of Medicine Dean Jay L. Hess, MD, PhD, with 2018 Watanabe Prize winner Jean Bennett, MD, PhD, at the 10th annual meeting of the Indiana Clinical and Translational Sciences Institute. Dr. Bennett is the physician-scientist behind the first gene therapy approved in the U.S. to target a disease (blindness) caused by mutations in a specific gene. (Eric Schoch)

Indiana University School of Medicine is accepting nominations for the 2019 August M. Watanabe Prize in Translational Research, awarded to an investigator who has made a significant contribution to the field of translational science.

The Watanabe Prize is one of the nation’s largest and most prestigious awards recognizing individuals focused on shepherding scientific discoveries into new therapies for patients. It is named in honor of the late August Watanabe, a titan in the field of translational research in both academia and industry, who impacted the health of people around the world as a leader at IU and Eli Lilly and Co.

Dr. Watanabe began his career at IU School of Medicine in 1972 and served as chair of the Department of Medicine from 1983 to 1990. From there, he joined Eli Lilly, where he was ultimately named executive vice president, overseeing the launch of 11 drugs and doubling the size of the company’s research and development staff.

Nominees for the Watanabe Prize should be members of the scientific or medical community who have achieved outstanding accomplishments in translational research. This award is conferred upon senior investigators whose influential research deserves major recognition. The winner of the 2019 Watanabe Prize will receive a $100,000 award and spend time in Indianapolis as a visiting dignitary to share knowledge with audiences at IU and partner institutions. Over the next two years, the honoree also will serve as a long-distance mentor to two exceptional young investigators named concurrently as Watanabe Translational Scholars. Note: This year’s prize nominees must be available to travel to Indianapolis from September 11-13, 2019.

1) a copy of the nominee’s current curriculum vitae (CV), and

2) a letter of nomination, including a detailed description of the nominee’s major translational research accomplishments and the impact of these contributions to the fields of science and medicine. Letters should be on official letter head and signed by the nominator.

Please include the nominee’s name in the email subject line.