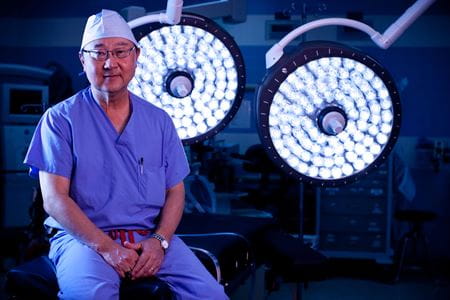 Richard Miyamoto, MD, the retired chair of the Department of Otolaryngology-Head & Neck Surgery at Indiana University School of Medicine, was honored Friday, June 8 with the Ritchey Emeriti Faculty Award. Named after the late IU School of Medicine alumnus and faculty leader J.O. Ritchey, the award recognizes a member of the emeriti faculty whose service to the school continues after retirement.

Miyamoto is a pioneer in the field of otolaryngology who helped thousands of people hear as a result of his groundbreaking research and advocacy related to cochlear implants.

The following story originally appeared in the Winter 2013 issue of the IU Medicine magazine.

At first, Laura Farmer didn’t think much of it when her newborn son, Trey, failed a hearing test. In fact, when she received a letter a few weeks later saying he’d need a follow-up exam, she took him to the doctor alone, certain there was no need for moral support. But as she watched the technician administer the test, she knew something was seriously amiss.

“I remember watching his face,” Farmer recalls. “He kept trying over and over and I said, ‘What’s wrong?’ He said, ‘I don’t know how to tell you this, but I’m not getting any response at all.’”

Trey didn’t simply have a hearing problem. He was profoundly deaf. Farmer and her husband sought out an ear, nose and throat specialist in Georgia, where they lived with Trey and their daughter. But they were told there was nothing to be done until he was older. Farmer wouldn’t accept that answer, and soon her relatives were scouring the country for doctors who might help little Trey hear. They were surprised when their search took them to Indiana, where Laura had grown up.

Richard Miyamoto, MD, the chairman of the Department of Otolaryngology at the Indiana University School of Medicine, is one of the world’s leading experts and an early pioneer of cochlear implants, a small device that can help even the profoundly deaf hear. So on December 5, 2000—just six months and four days after Trey was born—Miyamoto performed surgery, making Trey the youngest child in the country at that time to receive a cochlear implant.

Today, Trey is in fifth grade, and if you met him, you would have no clue that he once couldn’t hear a sound.

“He’s the news anchor on the morning show at school,” his mom says proudly. “He’s been in plays and he sings. They’re having a fifth grade musical and he’s the narrator.”

The mechanics of hearing

Trey is one of about 2,000 children and adults who have received life-changing cochlear implants from Miyamoto and his colleagues at Indiana University School of Medicine. But the actual number of people aided by Miyamoto’s work is far greater; without him, the technology may not be available at all. To understand the significance of cochlear implants and Miyamoto’s role in bringing them to the masses, it’s first necessary to understand how most of us hear.

Whenever a dog barks or a baby cries, the sound travels as an acoustic wave from the outer ear to the eardrum. These waves cause the eardrum to vibrate, which sets tiny bones in the middle ear in motion. Next the sound moves into the inner ear, or cochlea. Here, the waves cause thousands of hair cells to ripple.

In one of the wonders of the human body, these cells convert the physical vibrations into electrical information that is shot to the brain through the auditory nerve. The brain interprets those electrical signals and—voila!— we’re able to recognize a friend’s voice or know when a smoke detector is blaring. And all this happens in a split second.

For people like Trey, the process breaks down because of damage to those tiny hair cells. A traditional hearing aid doesn’t help, because there’s no sound to amplify. Enter cochlear implants.

With both an external component to capture sound and an internal element implanted in the ear, a cochlear implant works by bypassing the malfunctioning part of the inner ear and creating its own electrical signals that go to the brain. For some patients, the devices allow them to be aware of vague noises in the environment or to detect—though not understand—speech. For others, like Trey, the implants, when coupled with intense therapy, give them the ability to listen and speak like others their age.

In any case, the results are far more impressive than most would have ever expected when the devices were first being experimented with in the 1970s. In fact, most “experts” had all but written cochlear implants off as a waste. Luckily, Miyamoto was not among them. And he happened to be in the right place, at the right time, to convince many of the most vocal critics that hearing truly could be a reality for those who once had no hope.

A pioneer in the field

Richard Miyamoto grew up in Western Michigan. An athletic youngster, he played quarterback and corner linebacker on his high school football team, the Zeeland Chicks; the team was undefeated his junior year. His athleticism helped steer him to Wheaton College, where he was recruited to play football.

While passionate about sports, he would find his true calling in medicine. After graduating from Wheaton, he attended medical school at the University of Michigan and chose to complete his residency training in otolaryngology at IU because he was attracted to the School’s balance between clinical care, research and teaching. He then spent two years in the Air Force in Southern California before continuing with more advanced training at the House Ear Institute in Los Angeles, one of the nation’s premier institutes for hearing research and treatment.

When Miyamoto arrived, William House, MD, the brother of founder Howard House, was experimenting with an early, rudimentary version of a cochlear implant and invited experts out to see first-hand its potential. They were uniformly unimpressed. “All the leading scientists in our specialty didn’t think it was going to work,” Miyamoto says. “The ears are very complex structures. They didn’t think this little device could work.”

Miyamoto was himself intrigued but didn’t imagine cochlear implants would be part of his future. Upon completing his fellowship, Miyamoto returned to IU School of Medicine and joined the faculty in 1978. Cochlear implants were far from his mind.

Then just a few months later, House called with a unique opportunity: He wanted to conduct a clinical trial that involved testing cochlear implants on patients at multiple locations across the country. The goal, he said, was to help a few patients who could describe the transformation and vouch for the devices. He wanted Miyamoto to sign on as one of seven co-investigators.

“The rest were all big names,” Miyamoto says of the other physicians involved with the study. “But I thought, ‘In this particular instance, I’m their equal, because none of us knows anything.”

He implanted his first cochlear implant that same year under the watchful eye of House. The patient, a woman named Virginia, was the mother-in-law of one of his residents.

“All of our early patients had hearing before, so Virginia could speak,” he says. “She could describe what she got from the implants. She used it to get warning sounds and to augment lip reading, and with a hearing code she could speak on the phone.”

Around the same time, the Food and Drug Administration took a more active role in approving devices, meaning cochlear implants now needed the agency’s stamp of approval. Of the seven physicians involved with the clinical trial, Miyamoto was the only one affiliated with an academic medical center. Since the university had experience navigating the FDA, he became the group’s spokesman, making multiple trips to Washington to argue the case that the implants were safe and effective. Later, he served as a consultant for the FDA, helping regulators understand the evidence that was placed before them.

Miyamoto was not only instrumental in getting the devices approved. He also led the charge to make them available to children of younger and younger ages. The earlier children can hear, he argues, the more normal their speech will be. Interestingly, the cochlea is fully developed during pregnancy, meaning a child won’t outgrow the implant.

He has has implanted cochlear devices in children between ages 6 months and 1 year as part of clinical trials, including Trey. Says Laura Farmer: “The research he’s been able to do and what he’s done for these kids is amazing.”

The IU School of Medicine Department of Otolaryngology-Head & Neck Surgery was ranked 13th in the country in NIH funding in the 2017 federal fiscal year. Learn more about the department and research underway to address important medical conditions such as hearing loss and cancer.