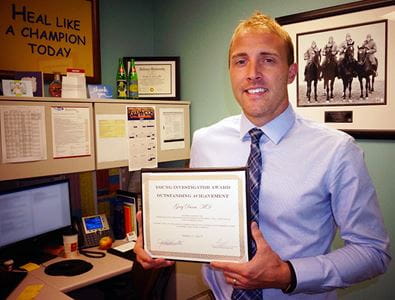 Less than two years ago, Greg Durm, MD, was finishing up his hematology-oncology fellowship at IU School of Medicine. Now he’s putting the finishing touches on an oral presentation he’ll soon deliver at the world’s leading organization for oncology professionals.

Dr. Durm is scheduled to present an oral abstract about a Phase II lung cancer clinical trial Monday, June 4 in Chicago at the annual meeting of the American Society of Clinical Oncology (ASCO). Nearly 40,000 physicians, researchers, and others from around the world are registered to attend the meeting.

For his part, Dr. Durm – assistant professor of clinical medicine at IU School of Medicine and a researcher at the Indiana University Melvin and Bren Simon Cancer Center, will be given 12 minutes to talk about the trial, which was sponsored by the Hoosier Cancer Research Network. Results show that the use of an investigational immunotherapy drug, pembrolizumab, following standard chemotherapy and radiation treatments for patients with non-small cell lung cancer improve outcomes.

This trial, known as an investigator initiated trial (IIT) because it’s led by physician scientist Dr. Durm and his colleagues, confirms previous results from another clinical trial that was an industry sponsored trial led by the pharmaceutical company AstraZeneca.

Nasser Hanna, MD, the Tom and Julie Wood Family Foundation Professor of Lung Cancer Clinical Research at IU School of Medicine and an IU Simon Cancer Center researcher, also was involved in the Hoosier Cancer Research Network trial. He put the results in perspective: Progress for lung cancer patients has come in slow increments over the past 50 years. Treatment advances moved survival rates from 5 percent to 15 percent and then eventually 20 percent. But these two recent trials show a likely cure rate of 35 percent to 40 percent.

That’s a game changer because lung cancer is still the leading cause of cancer death in America. It kills more people than colorectal, breast, and prostate cancer — the second-, third-, and fourth-leading cancer killers — combined.

What happens next after Dr. Durm’s ASCO presentation? That remains to be seen, Dr. Durm said. He said one scenario that could happen is that the National Comprehensive Cancer Network could include pembrolizumab as a potential treatment for stage III non-small cell lung cancer patients after chemotherapy and radiation.

As for Dr. Durm’s presentation, Dr. Hanna offered another perspective: “Very few junior faculty less than two years out of fellowship have an oral presentation at ASCO. IU is one of only a handful of academic centers that has repeatedly accomplished this among junior faculty.”

He credited that success rate to the leadership, mentorship, support, and the example set by IU’s Lawrence Einhorn, MD. Among all of Dr. Einhorn’s accomplishments, he also served as ASCO president from 2000 to 2001.

Dr. Durm also credits the legendary Dr. Einhorn, as well as Drs. Hanna, Shadia Jalal, Safi Shahda, and others for his helping to guide his career.

In addition to lung cancer, Dr. Durm – who sees patients twice a week – also has a research interest in head and neck cancer.

Last year, the former chief resident was one of just two investigators to earn a $10,000 grant at the  Young Investigators Forum in Non-Small Cell Lung Cancer in Atlanta. In 2014, he received the George and Sarah Jane Fisher Young Investigator Award from the Hoosier Cancer Research Network for his  significant contributions to clinical research.

“It’s no surprise that Greg has been chosen to present at ASCO,” Dr. Hanna said. “In his short career, he has already captured awards and played leading roles in the development of clinical trials all while successfully balancing the care of patients. He’s a rising star at IU.”