A Piece of Greatness: Getting to Know Himanshu Shah 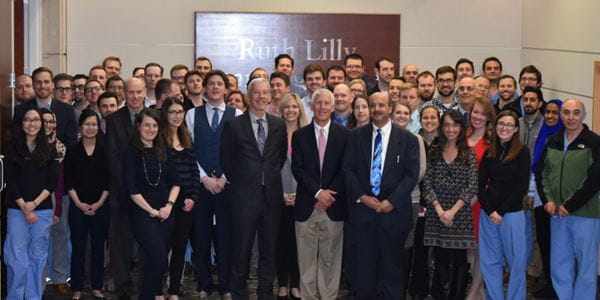 When visiting his office, you’re sure to find a few jars full of candy and chocolate. In fact, attend a meeting with him and he’ll throw a sweet snack your way before you head out the door. While this is a pleasant treat, this act of giving actually reflects the department he serves: staff, faculty, residents and fellows collectively pulling at each other’s strengths while being encouraged to share their own. With Dr. Shah, everyone gets a piece.

In his third official year as chair of the Department of Radiology and Imaging Sciences, Himanshu Shah, MD, never imagined this career for himself. With his mother’s career as a Montessori teacher and his father’s role as a general surgeon, Shah possessed an early aptitude for education, medicine and helping others. As he continued to grow in the likeness of his parents, Shah became more and more intrigued by the idea of a career in medicine, particularly one where he could focus on educating and treating patients. It appeared that a career in internal medicine would be a good fit. It wasn’t until he was heavily immersed in med school, when he felt himself being pulled away from internal medicine and, instead, toward different subspecialties and new technologies. It was only a matter of time before he found himself beginning a residency in radiology at IU School of Medicine.

From Resident to Chair

Throughout his residency and into his fellowship year, Dr. Shah was gearing toward a career in private practice. He loved the opportunity to assess and treat patients, and greatly enjoyed the clinical components of practice. But with his other passion for education still wanting to peak through the cracks, he decided to delay a private practice career and joined the radiology faculty at IU School of Medicine in 1996. While the daily interaction and education of the trainees was satisfying, he wanted to play a larger role in education and this came to fruition in 1999, when he became the department’s Interventional Radiology fellowship director. This was an excellent opportunity for him to educate others while remaining in a department that constantly urged him to give it his all while witnessing the greatness amongst his colleagues.

“Through these various roles and unexpected time in academia, I was able to do more than I ever dreamed I could in my career,” says Shah.

Being in an academic practice, Shah felt that he still needed to contribute more to the department’s tripartite mission.  A leadership opportunity opened up, and to his surprise, Shah was named as the chief of radiology at Wishard Health Services, now Eskenazi Health. For the following 16 years, he held tightly to his love for clinical work in interventional radiology while maintaining significant roles in education and strongly supporting the department’s research mission. Then, in 2014, Shah was asked to become the interim chair of the IU School of Medicine Department of Radiology and Imaging Sciences. Keeping his passion for patient care alive, he agreed to the interim role with the understanding that he could still keep his clinical days. But as months passed and the longer he was in the role, the more he caught himself dreaming up goals for the department and adding his own pieces of insight to the radiology candy jar.

“I initially didn’t feel qualified for the role,” said Shah. “But having the support of brilliant minds, both within and outside the department–and with the mentorship and support of other academic radiology department chairs in the country–I started developing a strong vision for the department’s future. As more time went by, I just started seeing opportunities where our department could grow.”

Eventually, Shah was encouraged by his colleagues to throw his name in the hat for the permanent chair position for the department. This, coupled with his growing vision, helped shrink his doubts and in December of 2015, he landed the job.

Since he’s officially taken this leadership role, Shah has continued to hold tightly to the strong and unique culture of the department, while leveraging the attributes of his colleagues.

“I’m just one person, but we have a department of more than 200 people. Wouldn’t it be great to harness their strengths and ideas?”

Since he became chair, Shah has helped open new avenues for professional development and new ideas for the department’s subspecialty areas. And, similar to his own experience, he encourages his colleagues to pursue internal and external opportunities that they may not have initially considered. Shah recognizes that through challenge comes greatness, and he’s aware that everyone’s unique qualities add to the department’s mosaic. It’s apparent that he’ll continue to guide his peers onward, letting each person have an opportunity and sharing the benefits with everyone. In Dr. Shah’s department, everyone does get a piece.

Learn more about the unique Department of Radiology and Imaging Sciences and the inspiring Dr. Shah.