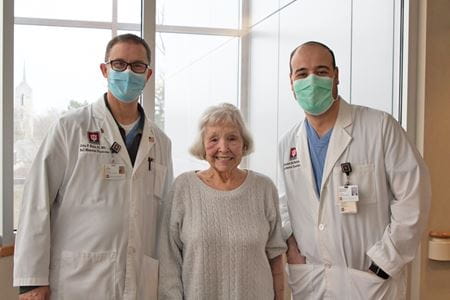 This procedure is minimally invasive and is done to replace a narrowed aortic valve that has failed to open properly. The significance of this procedure means that these type of replacements can now be done even on people who would not be able to withstand an open-heart procedure.

Faith's journey to receiving this procedure has been a rather long one. Over a year ago, Faith was at Ball to undergo a different procedure - it was while the doctors were figuring out how best to do this procedure that they noticed that she was having heart problems. Faith was then placed in the care of Dr. Bruce Graham, cardiology. It was at this time that Dr. Graham introduced Faith to the idea of the TAVR procedure.

Before Dr. Graham's introduction of it, neither Faith, nor the members of her family, had heard of this procedure. But it was because of their faith in Dr. Graham that they continued to pursue this option.

Not long after Faith was recommended for this procedure, she met with the doctors who would possibly be performing it on her - Drs. Kuhn and Madmani.

"We had a lot of faith in Dr. Graham, and I liked these doctors, Kuhn and Madmani, very easy to talk to and so friendly," Faith said while waiting to be discharged the next day from her TAVR procedure.

Since she's lived in Muncie for close to 70 years, Faith mentioned that she didn't want to go down to Indianapolis to have this procedure done. So it was almost fate that Ball was able to start doing these TAVR procedures in the timeframe of when she would need it done.

After a few diagnostic procedures, Faith was deemed a candidate for TAVR. Faith and her family then conferred together to decide whether they wanted to move forward with the procedure.

"We trust Dr. Graham, and then we met Dr. Kuhn," Tom Fouch, Faith's son, said about himself and his older brother, Mike, "and we both felt really confident with what he wanted to do and how he was going to do it."

With her consent now given to proceed, all of Faith's physicians, as well as a panel of experts in the field, met together to finalize the particulars of the procedure.

The day of the TAVR procedure came, and Faith was in and out of surgery in 3 hours.

"I feel good!" Faith exclaimed just one day after this procedure.

"There's a noticeable difference," Tom continued. "There was a lack of energy, we didn't know if it was because of her age and not letting her out of the house due to COVID, but after all the reports on her heart, we knew things were going that way [low energy] because of it."

It was at this time in the interview that two of Faith's doctors, Dr. Kuhn and Dr. Madmani, came in to take a picture with Faith as one of their first of many TAVR success stories. Faith walked, yes WALKED, down to the end of the hall and back to pose for this picture - a mere 24 hours after one of her heart valves was replaced.

"If anyone has to have this procedure done, I recommend all of my doctors!" Faith glowed. "Because they've done it before and they were successful."

This success was only made possible by the great team effort that ensured the positive launch of the TAVR procedure at IU Health Ball - with many thanks also going to the Cardiovascular Institute leadership of Dr. Subha Raman and Blake Dye for their instrumental support in this launch as well.

Learn more about the Cardiovascular Institute.

The Cardiovascular Institute brings together highly skilled caregivers, researchers, and educators into close collaboration to improve the health of patients and communities across Indiana.