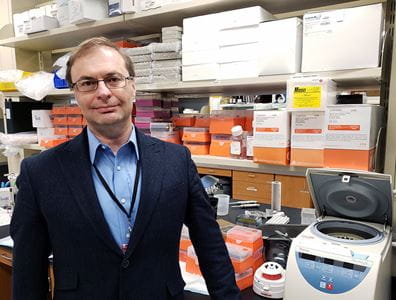 Indiana University School of Medicine’s Mircea Ivan, MD, PhD, has a strong connection to this year’s winner of the Nobel Prize in Medicine, Dr. William Kaelin Jr. of Harvard University and Dana-Farber Cancer Institute. Dr. Ivan was a postdoctoral fellow and subsequently an instructor in Dr. Kaelin’s lab between 1998 and 2002 and first-authored the original studies on cellular oxygen sensors. Dr. Ivan’s group focuses on molecular responses to hypoxia based on noncoding RNAs and their relevance to biology. Importantly, it was Ivan’s lab in 2007 (then at Tufts Medical Center in Boston) that reported the first connection between oxygen sensing and microRNAs. We asked Dr. Ivan to answer some questions about his groundbreaking work with Dr. Kaelin and the ongoing research of his group.

Q: First off, congratulations because you’re the first author of the Science journal article featured as the key publication for which Dr. Kaelin was awarded the Nobel Prize. That has to be thrilling, yes?

A: Naturally, I was both elated and overwhelmed by the news. Although, if I were to be entirely rational, I should not have been very surprised as multiple predictors were already in place. For example, the original papers listed on the Nobel site as essential for this year’s awards have been cited thousands of times. Second, our medical students can already find HIF prolyl hydroxylases (HIF-PH) mentioned in their textbooks, such as Guyton’s Physiology and Harrison’s Internal Medicine. Furthermore, the trio of Kaelin, Semenza, and Ratcliffe had already collected multiple “pre Nobel awards,” such as the Lasker (2016) and the Gairdner of Canada (2010). Perhaps most significantly from a clinical standpoint, these discoveries led to important therapeutic applications.

Q: What is that research about?

In an editorial accompanying our 2001 article, Dr. Franklin Bunn emphasized that an answer to the question “How do cells sense O2?” had been sought for many decades. In short, as a postdoctoral fellow in Dr. Kaelin’s laboratory, I identified the mechanism utilized by all animal cells to “monitor” O2 abundance in their surroundings. Given the central role of O2 for life, it is hardly surprising that the discovery had deep implications for many basic research areas. Furthermore, during the past 18 years or so, these oxygen sensors have attracted considerable interest from a drug development angle. In 2002, I was also the first author of an article published in the journal PNAS describing molecules that bind these oxygen sensors, providing early proof-of-concept for a new class of drugs that are reaching clinical use.

Q: You and Dr. Kaelin also hold some patents together. What can you tell us about those patents?

A: Yes, we hold multiple patents together. One patent played an important role for the development of a new class of drugs termed HIF-PH inhibitors (HIF-PHI). In simple terms, by blocking the O2-sensing machinery, these molecules “turn on” genes that are typically silent in nomoxic cells. Among the 200 or so “hypoxic” genes, erythropoietin turns out to be particularly responsive to HIF-PHI in vivo, a connection with major clinical implications. The first-in-class oral agent from this class, Roxadustat (Fibrogen/AZ), was recently approved for the treatment of chronic kidney disease-associated anemia in Japan and China, with the United States and Europe anticipated in the near future. Additional inhibitors are not far behind. Based on the available literature, future clinical applications for these compounds may include chronic inflammatory disorders or ischemic conditions.

Q: How did your experience working with Dr. Kaelin influence you professionally?

A: I would compare my years at Dana-Farber to drinking water from a high-pressure hose. The discussions were intense and rigorous, during lab meetings and ad hoc. One had little choice but to become very fast and an independent thinker. During those “pre-Photoshop days,” we’d sit in front of a freshly developed blot and dissect it to the smallest details. Everything on the film had the potential to be meaningful, from subtle mobility shifts to unexpected band patterns. Bill (Kaelin) used to say, “One can never have too many controls,” which summarized the MO of his group and stayed with me ever since. I also recall the frequent interactions with young colleagues from neighboring labs, such as late afternoon brainstorming sessions around a cup of coffee with a brilliant hem-onc fellow, Ned Sharpless, the current acting commissioner of the FDA and former director of the National Cancer Institute.

Q: What research are you working on right now?

A: After becoming an independent investigator, I remained attached to the fascinating field of O2 sensing, but my group developed its own niche and one of our papers has been cited almost 1,000 times. Our ongoing work focuses on molecules that are not only relevant for O2-related research, but has unexpected relevance for steroid hormone biology and inflammation studies.