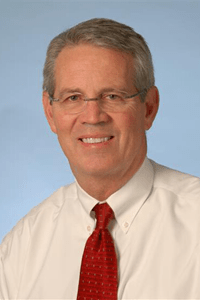 Although men may not like to talk about it, prostate cancer is the most common cancer and the second leading cause of cancer death among men in the United States, according to the National Cancer Institute. Al Roker, the Today show weatherman, recently announced he was diagnosed with prostate cancer and that he had it removed surgically, which put a spotlight on the disease.

Michael Koch, MD, chair of the IU School of Medicine’s Department of Urology and a member of the IU Simon Comprehensive Cancer Center, is a prostate cancer expert with 35 years of experience. He and a colleague were the first to develop the high-intensity focused ultrasound (HIFU) research protocol at IU. In 2017, he was the top honoree in the Indianapolis Business Journal’s Health Care Heroes awards program in the “Advancements in Health Care” category for his HIFU work.

We turned to him for some answers about prostate cancer.

Q: Other than age, what else contributes to prostate cancer?

A: The causes of prostate cancer are not fully known. Certainly, age is a major risk factor. Other factors that have been proposed to increase a man’s risk of being diagnosed with prostate cancer are race (Black men are at a higher risk), obesity, and a diet rich in animal fat.

Q: What are some symptoms that should lead men to see their doctors?

A: Most men that are diagnosed with prostate cancer have no symptoms. Many of these men have concurrent non-cancerous prostate enlargement that can cause decreased urinary stream, urine hesitancy, and sometimes urine frequency. Men who are unfortunately diagnosed with very advanced prostate cancer may have pain in their bones, but this occurs in only a few percent of men, generally with very high PSA values (blood test).

Q: Does prostate cancer impact Black men differently from white men? If so, why is that?

A: The general belief is that Black men have more aggressive prostate cancers and that they do not do as well after treatment. The cause of this is not clear.

Q: Most men, at least of a certain age, have probably heard of PSA (prostate-specific antigen) and digital rectal exam (DRE), two tests that look for possible signs of prostate cancer. At what age do you suggest men have one or both of these screenings? Is one better than the other?

A: The guidelines for screening men for prostate cancer are controversial and have varied somewhat over the years. Most believe that Black men and men with a strong family history of prostate cancer should begin screening earlier, generally age 40-45. Men who are not at increased risk can generally start screening around age 50. Equally important, the literature does not support screening asymptomatic men beyond the age of 70.

Q: Treatment options range from so-called “watchful waiting” to surgery to immunotherapy and more. How would you summarize all of the available options?

A: Most importantly, a large portion of men diagnosed with prostate cancer have small non-aggressive prostate cancers that do not require treatment but do require monitoring. Few of these cancers ever require intervention.

In men with cancers that are more serious and do pose a threat to the health of the patient, some type of removal or destruction of all or part of the prostate is generally indicated which might include robotic surgery, various forms of radiation, or a variety of techniques to “cauterize” just a part of the prostate.

Q: You’ve been a pioneer in your field. What do you see on the horizon in terms of advances against prostate cancer?

A: There are several advances in the last few years, and I would break them down into three areas. First, there have been very significant advances in selecting which tumors will behave aggressively and which ones will follow a very non-aggressive course. Second, we have less invasive techniques to treat prostate cancer in some men and allowing some of those men to avoid the side effects that can occur after more aggressive treatment. Third and most excitingly, there have been very substantial advances in molecular imaging of prostate cancer allowing us to more accurately determine which patients might benefit from treatment of prostate cancer and also tailoring the aggressiveness of that treatment to that specific patient’s need.

Q: Men, in general, can be reluctant to see a doctor. That can be particularly true with this type of cancer. How do you encourage men – or the people around them that love them – to be checked out by their physicians for prostate cancer?

A: This is the toughest question. Many men tend to avoid any type of health screening whether it be general check-ups for blood pressure and diabetes or other conditions and some seem to believe that they are invincible. Many believe that they are too busy to go get a check-up. Frequently, men come in at the prompting of their spouses. Men should realize that prostate cancer has become the most common cancer diagnosed in men and the most common cause of cancer death in men. Urologists now have the tools to carefully determine who is at risk for cancer and who is not, and to customize treatment to each and every patients’ specific circumstances thereby minimizing the side effects of treatment while curing most men of their most frequent cause of cancer death.